What we can learn from the Duchess of Sussex's first Trooping The Colour, and her week ahead travelling to Cheshire with the Queen 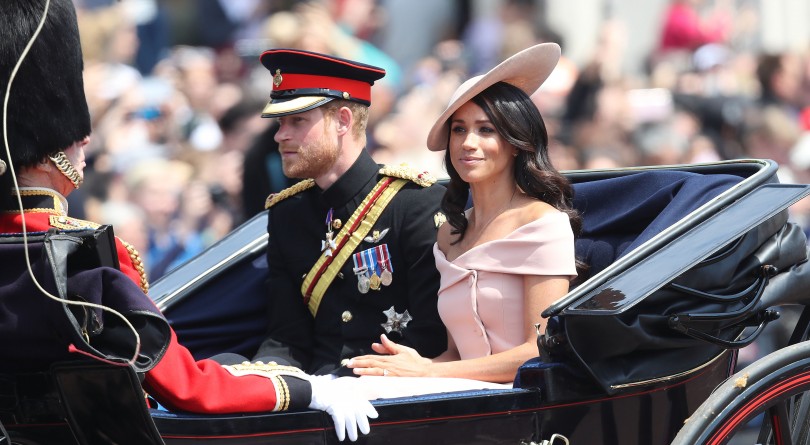 Prince Harry, Duke of Sussex and Meghan, Duchess of Sussex, head back down the Mall to Buckingham Palace during Trooping The Colour on June 9, 2018 in London, England. (Chris Jackson/Getty Images)

After this year’s Trooping the Colour, it was time for Meghan Markle, now Duchess of Sussex, to cross another first off her list of royal of events: a balcony appearance at Buckingham Palace. After a quiet, private honeymoon, Prince Harry and his new royal bride began a round of high-profile duties on Saturday with the most important of the year, the grand military ceremony that marks the official 92nd birthday Queen Elizabeth II, held every year in early June rather than her real birthday of April 21, in the hopes of better weather.

It’s part of a strategic plan to formally introduce Meghan as an integral member of the royal family. So, three weeks after her wedding, which was followed by an outing at a Buckingham Palace garden party for the charities and organizations tied to Prince Charles, who turns 70 this year, Meghan is now plunging—carefully and deliberately—into royal life. In turn, the royal family is making it clear that she is very much a senior member of the family.

First the ceremonial. Meghan sat beside Harry in a horse-drawn carriage procession from Buckingham Palace to the Horse Guards parade ground where thousands of troops waited to parade a regimental flag (a Colour) in front of the Queen. This year, it’s the 1st Battalion of the Coldstream Guards, whose colonel-in-chief is the Queen.

It was Meghan’s first time in such a grand royal event, filled with age-old pomp and circumstance. While Harry smiled and waved, she looked a bit overwhelmed as she surveyed the huge crowds lining the route. She wasn’t on display during the ceremony, but instead got to watch it from a window in the Horse Guards building while talking with other royals.

Then it was back to Buckingham Palace for her inaugural balcony appearance. While the Windsor kids are often oblivious of the throngs below, it can be intimidating, especially for adults. When it was Kate’s first turn, after her wedding in 2011, she couldn’t help but say “Wow” as she caught her first glimpse at the huge crowds gathered at the palace gates.

So while Meghan stood in the front row to watch the Queen and royal colonels (Charles, William, Andrew and Anne) return to the palace with their troops, she took a more protected position during the longer, most famous part of the balcony tradition: the flypast by the Royal Air Force. She and Harry tucked themselves being the Queen in the back row, in the middle of the royal group but not the main focus, while the Queen’s great-grandchildren entertained the crowds by playing, chatting and waving in the front row to the planes as they thundered overhead. 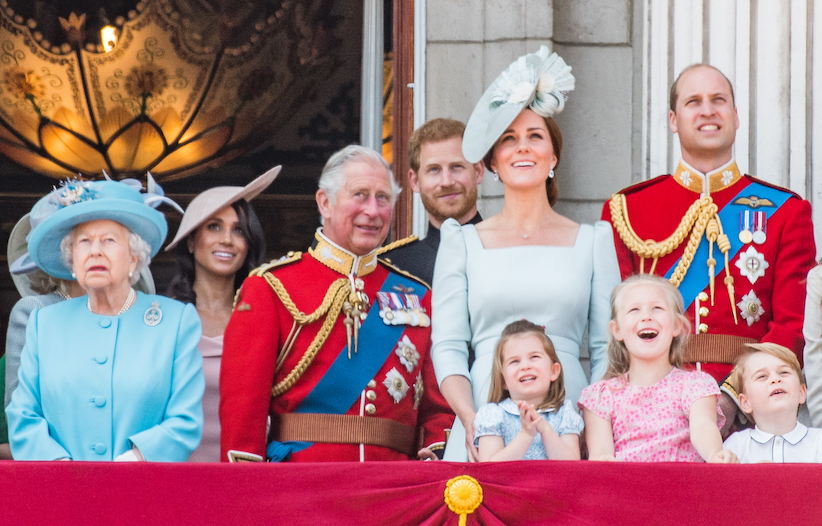 There were a few hiccups, as expected for someone still learning what it means to be a royal in appearance and attitude. Meghan wore a simple peach dress by Carolina Herrera, but its off-the-shoulder style was a bit too cocktail-y for such an important military event in which shoulders are usually covered. And though her matching Philip Treacy hat was perched to the side, her long locks and swooping bangs blocked the view of her face for most on the parade route who had waited for hours for a glimpse of the royal bride. It’s a hairstyle choice that her sister-in-law, Kate, Duchess of Cambridge, has learned—after much criticism—should not be used for such events, especially when the winds will play havoc. Such was the case during Meghan and Harry’s return to Buckingham Palace, when she could be seen trying to keep her hair in some semblance of order.

Meghan’s premiere week continues on Jun. 14, when she and the Queen will travel to Cheshire for a series of royal events. As it’s a bit of a haul from London for the 92-year-old monarch, Elizabeth II will sleep overnight near their destination on the Royal Train (it pulls into a quiet siding so everyone gets a good night’s sleep.) And Meghan has been invited to stay overnight on the aging but luxurious train, an honour not yet bestowed on other young royals like Harry, William or Kate. (In the era of helicopters and planes, the stately train is unlikely to survive the Queen’s reign, as she and Charles are pretty much the only ones who use it these days. Still, she approves every usage by other royals.)

In Cheshire, they’ll undertake classic royal duties: opening a bridge, officially cutting a ribbon at a cultural centre that’s actually been going since last year, and finally, a lunch at the Chester Town Hall.

The day in Cheshire could be rather terrifying for someone who has only been on two dozen royal engagements, all with Harry, first to informal youth-oriented events and later adding in increasingly formal events such military Remembrance services. This will be her first day without his comforting presence.

But the Queen-and-Meghan road show service a double duty. Meghan gets to see how the family’s expert at royal duty comports herself for the myriad unexpected details—how to handle a deluge of floral bouquets, chatting with local officials, how to pace meeting bystanders at a walkabout so as to not upset the overall schedule. And, in return, the Queen gets a companion. She used to do such events either alone or, more likely, with her husband. But now that Prince Philip, 97 on Sunday, has retired, she’s taking relatives more and more frequently. Last week, it was Camilla’s turn, at the 10th anniversary of the Medical Detection Dogs charity, of which Camilla is its patron.

Meghan will have been briefed extensively on every aspect of the event. As well, if the Queen can’t guide her, then expect to see the guiding hand of a lady-in-waiting who acts as a female regal aide on such duties. Having years of experience at such events, they can subtly direct Meghan if the unexpected crops up. Back in 2012, the Queen took Kate, Duchess of Cambridge, for such an “away trip,” this time to Leicester at the start of her Diamond Jubilee tour marking 60 years on the throne. Though Philip accompanied them, the focus was very much on the royal women and their chemistry. It was a day marked largely by laughter.

What is different about the Cheshire trip is the timing. That Kate and Queen trip to Leicester came nearly a year after her marriage to Prince William. That Meghan is undertaking such a trip less than a month after marriage says a lot about how the family wants to make sure she’s comfortable in her duties, and that the world knows that she is now an important full-time royal.

Trooping the Colour and the day in Cheshire represent the beginning of the busy royal summer season. Then comes the Order of the Garter ceremony at St. George’s Chapel, where Meghan and Harry were married, as well as days of racing at Royal Ascot, as well as Wimbledon and the Queen’s annual Scottish tour. Expect to see Meghan at a carefully chosen selection of them as she continues her introduction to her new life as a senior royal.