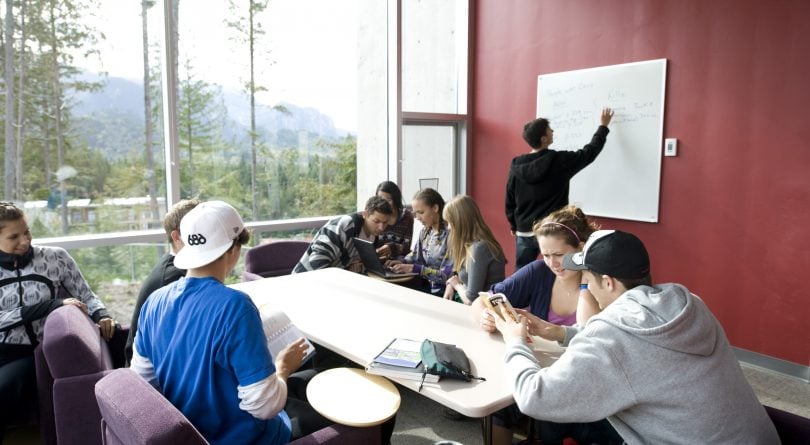 Students and faculty take part in a “Community Day” where students are taken out of all classes for the day to take part in a series of team-building exercises on the grounds of the school. (Photograph by Rick Collins)

Quest University Canada, tucked into the Coast Mountains in Squamish, B.C., is unique in the Canadian academic world: a private, not-for-proﬁt university offering a single bachelor of arts and sciences degree. Now 14 years old, it’s a reinvention of the well-rounded curricula of American liberal arts colleges, but with dramatic differences. Class sizes are capped at 20 students and courses are taken one at a time in intensive 3½-week blocks.

But it’s not just the block plan that’s different. The first two years of the degree, called the foundation program, is a core curriculum that introduces students to disciplines across the arts and sciences. The latter two years, called the concentration program, are student-designed, with each pupil working on a single question of their choosing, such as “What’s the best way to educate a child?” Students build their own curriculum and take experiential learning blocks on or off-campus to gain hands-on experience. The process culminates in a keystone project.

Last December, a deal was finalized between Quest and Primacorp Ventures Inc., bringing nearly a year of financial uncertainty to an end. In January 2020, Quest had been granted creditor protection after accumulating nearly $29 million in debt. Under the new partnership, Quest sells its land and campus buildings to Primacorp and the company then leases the facilities back to Quest. Primacorp, a large Canadian independent provider of private post-secondary education, will also provide support in recruiting, marketing, fundraising and operational financing. Quest faculty will continue to deliver programming and Quest will remain a board-governed, not-for-profit university.

Enrolment is down dramatically at Quest this year: 200 students compared to 600 students in the previous year. The latest graduation class was larger than normal while the fall 2020 incoming class was much smaller than usual, due to the COVID-19 pandemic and Quest still being in creditor protection at that time. In addition, a group of students decided to take a leave during the pandemic.

Quest’s physical setting is stunning. The campus is 45 minutes from Whistler and an hour from Vancouver, making it a recreational haven. Students can ford streams, explore forests or camp on beaches—sometimes for class credit. Skiing, snowboarding and the Pacific Ocean are never far away. The entire student body lives in condo-style residences on campus.

Quest is expensive by Canadian standards. Annual tuition, student fees, and room and board run about $48,680; however, a large number of domestic and international students receive financial aid.