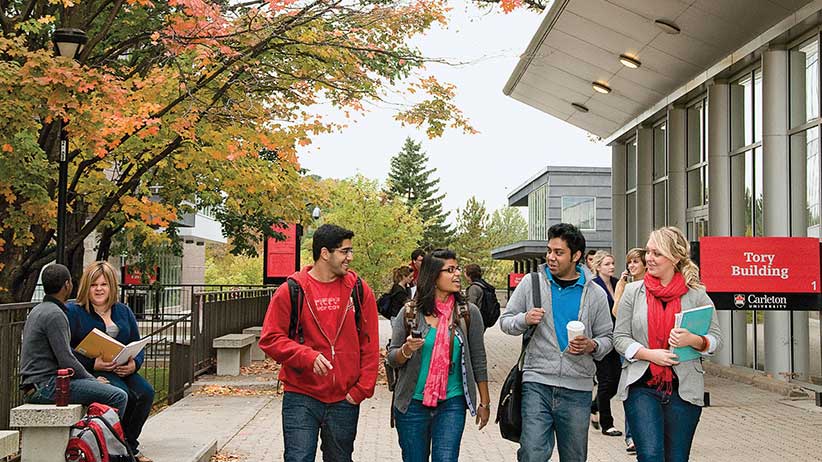 Truth be told, I came to Carleton for the journalism program, and because, as a Torontonian, I couldn’t handle living in a city any smaller than Ottawa. In fact, my initial tour of Carleton left me underwhelmed. Then I grew to love the place.

Campus can feel cut off from the rest of the city, since most of it is surrounded by water and parkland. Amenities aren’t just a short walk away. Thankfully, Carleton is a public transportation hub, accessible from most parts of the city, though not without backlog during rush hour. The first and last couple of weeks of each semester are particularly ruthless, since that’s when most people feel obligated to attend class.

We do not have much institutionalized school spirit, and many students commute from their family homes. Yet campus remains diverse and busy with a real sense of community, especially in residence and the small, more tight-knit programs such as the humanities and international business. Carleton students are engaged in campus life, even if flaunting school colours and getting sloshed at homecoming aren’t a necessity.

Extras
Campus politics are a big deal at Carleton. The school’s network of activists, student politicians and journalists form a microcosm of the political sphere. This is a source of entertainment and exasperation for those who observe from afar, but it’s also a great avenue for students to become involved. Just watch what you tweet.

City Vibe
I always feel that Ottawa is on the verge of something great. Whether it’s the city’s microbrewing industry, local food movement, or the burlesque, poetry and independent music scenes, Ottawa is making moves. The best way to experience what Ottawa has to offer is by integrating in the community. Sure, the Byward Market and the city’s various festivals are worth experiencing, but, after the bureaucrats head home and as tourists mill about monuments and dine at CAA-approved restaurants, there exists a young, vibrant, distinctly Ottawan culture. Exploring this city will make it your new home.

The Skinny
To figure out what’s happening in the city, Apt 613’s events calendar has you covered. Check it out at Apt613.ca.

Best place for a nap:
The mythology section of MacOdrum Library

Perks of living in this town:
Ottawa’s burgeoning burlesque scene

Where to live:
Centretown. Or, at least, nowhere south of Heron, unless you have a car and accept that friends won’t visit.

Most frustrating bus route:
No. 4 (Hurdman-Rideau Centre). It comes when it wants.

Biggest frosh mystery:
‘What the eff’s a Gee-Gee?’ (The name of the U of O sports teams and mascot)

Weirdest tradition:
During orientation week, frosh flock to the nightclubs of Gatineau, where the drinking age is 18. A night out in Gatineau is one giant metaphor for the folly of man, but the opportunity to use our real ID for the first time is too great to pass up.