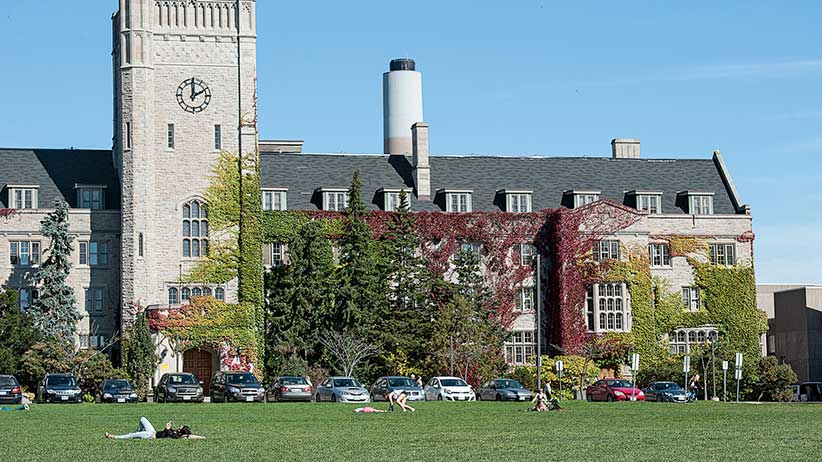 The famous clock tower of Johnston Hall, built in 1932, is just one of the architecturally appealing buildings among the abundant greenery on this sprawling campus. There are, however, a few eyesores. For example, Creelman, a traditional grey brick dining hall, has been renovated in an unappealing way. That said, Creelman, like most other spots on campus, provides a variety of delicious food, from steak dinners to turkey and stuffing. The food is a clear benefit of U of G that can’t be fully understood until it’s compared to the meals of friends attending other schools such as Queen’s.

The high-quality food underlines Guelph’s history as an agricultural college. To promise that you won’t spot a tractor rolling across Johnston Green (a grassy field at the centre of campus) or that you will never walk into the stench of manure and other unidentified farm smells would be, frankly, a lie. Guelph students are proud of their rural heritage, even if the vast majority now seem to be from cities and suburbs. However, just like the strong community atmosphere, you will come to love every other bit of the “aggie”-inspired traditions, including all those times when you are asked if you go to university on a farm.

Extras
U of G ensures an experience beyond just excellent academics. That can include anything from intramural athletics to the quidditch team, which travels to other schools to compete in the Harry Potter-inspired sport.

Although the fitness centre currently forces cardio-seeking students to elbow their way onto elliptical machines, a renovation should eventually make enough room for all the students on a campus that has grown rapidly.

U of G’s most enduring tradition is painting the cannon at the centre of campus with whatever messages students like, including marriage proposals and motivational sayings. Camping out after painting is a must, to ensure that nobody paints over your message.

City Vibe
Guelph offers the perfect balance between small town and big city. Students can stroll through the downtown farmers’ market, skate on the outdoor Market Square rink or canoe down the Speed River. For a bit of culture, visit the Bookshelf—a combined bookstore, alternative movie theatre, restaurant, café and bar. The nightlife offers something for everyone, from riding the bull at the Western Hotel, a new country-music bar, to dancing at Trappers Alley. It can be hard to get a decent ride home when the downtown bars empty out at night, due to the shortage of taxis. There is, however, the Magic Bus, an uncomfortable but free late-night shuttle.

The Skinny
For all things Guelph, TheCannon.ca has you covered. This student-run site has coverage of events from the Mardi Gras pub crawl to the next big concert on campus.

FILED UNDER: University of Guelph UniversityInsider2016

Perks of living in this town:
The amazing people—locals and fellow students

Where to live:
Close to downtown (making nights at the bar so much easier)

Most frustrating bus route:
The No. 5 Gordon

Best giveaway:
The chocolate and candy that fellow Gryphons hand out in the library during exam weeks

Unofficial school motto:
‘I swear it’s not a farm’