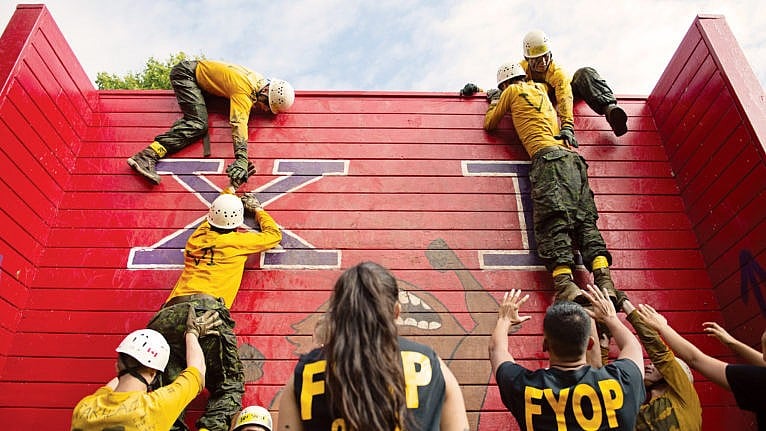 RMC trains officer cadets for all branches of the military. In the summer before school starts, ﬁrst-year cadets normally begin their basic military occupational qualification training—which includes drills, first aid and field training—followed in September by an orientation program that culminates in a challenging two-hour-long, team-based obstacle course. The campus is set on a 41-hectare peninsula on the shores of Lake Ontario just east of downtown Kingston, Ont., and features limestone buildings and a giant parade square dating back to 1876.

Students are required to complete a core curriculum of courses in the arts and sciences with applications in defence. As members of the Canadian Armed Forces, officer cadets also take part in as many as 11 weeks of military training in the summers at locations across Canada; some participate in military exercises, including weapons training and leadership training. Tuition and books are covered by the government, and officer cadets are paid an annual salary of approximately $28,000, which, after covering room and board and some other costs, still leaves about $1,000 in spending money each month. But the funding isn’t for nothing. After graduation, officer cadets must serve up to ﬁve years as commissioned ofﬁcers in the Canadian Armed Forces, and pilots have a longer period of service.

Says Commodore Josée Kurtz, RMC’s commandant: “In addition to having access to first-class academic programmes, our naval and officer cadets develop their fitness, bilingualism and leadership skills. Having benefited from the guidance and mentorship of experts and experienced leaders, they are ready to tackle a dynamic career as an officer in the Canadian Armed Forces.”

READ: An insider’s guide to the best campus food, place to study and more