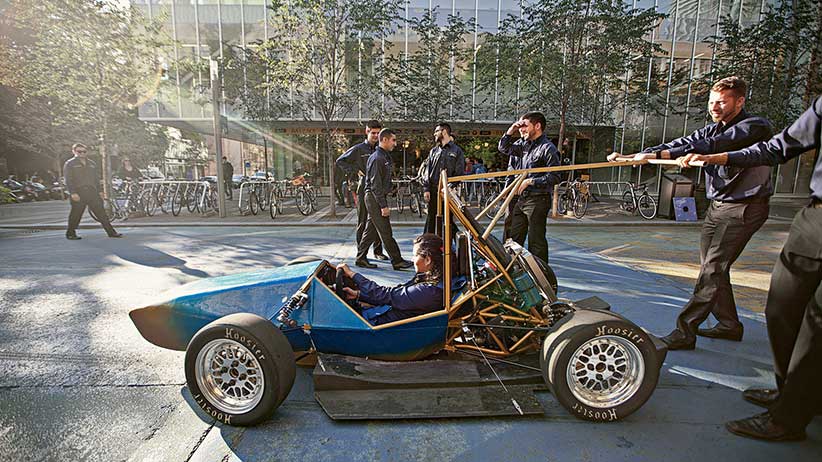 As soon as I walked onto the Ryerson University campus, I stepped out of my comfort zone. As a small-town girl from Sharon, Ont., I found the metropolitan vibe unfamiliar. As I explored my surroundings between classes, I eventually became accustomed to the frenzy of billboards and signs fronting Yonge Street near Dundas Square and the skyscrapers hugging the downtown streets. It’s easy to feel lost at a school where the buildings spread out from the Eaton Centre and occupy several blocks, mainly to the north and east, including a nearby movie theatre (where lectures are held during the day) and classrooms above a Canadian Tire store.

As I learned to navigate the urban campus, I discovered endless entertainment options. Whether it’s marching in the annual Parade and Picnic alongside hundreds of students during the Week of Welcome or skating on Lake Devo with a hot chocolate in hand, one thing is certain: You will never run out of things to do.

Toronto is a city that never sleeps—and the students never sleep either. One look around campus and you will see caffeinated students arriving from their early-morning commutes. Though it may not have that traditional campus feel, it’s easy to get involved in the surrounding community given the size and multicultural breadth of the city. I feel a sense of pride as I make my way through the concrete jungle, and feel a sense of belonging when I arrive on the university grounds.

Ryerson offers an exceptional undergraduate experience with easy accessibility to internship and work opportunities around the city. In addition to degrees, it also offers a life experience like no other. If downtown Toronto is the heart of the city, at Ryerson you can feel its pulse every single day.

Extras
The former Maple Leaf Gardens is now home to Ryerson students as it’s been revamped and constitutes one of two school gyms (this means reduced treadmill wait times). Those who prefer eating as a sport will be pleased to know that the university recently launched Ryerson Eats—an initiative that focuses on providing local and fresh food choices around campus. It also offers an abundance of clubs to satisfy various interests, including movie screenings and yoga, as well as a selection of language and culture-themed associations.

City Vibe
Ryerson is the middle of the city’s unfolding action and you are only a few steps away from a world of adventure. September is one of my favourite times of year as the city becomes one big red carpet welcoming world-renowned film directors and actors for the Toronto International Film Festival. Toronto’s highly developed transit system will give you access to iconic landmarks, including the Air Canada Centre, CN Tower and Royal Ontario Museum. Whether you’re looking to window shop along Queen Street West or take a stroll through Kensington Market, the monthly TTC metropass is your key to the city.

The Skinny
Check out BlogTO.com to get the latest information on the best of Toronto’s culture, events and city life. 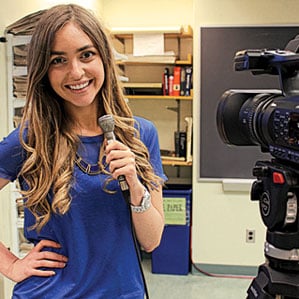 Best place for a nap:
Couches in Pitman Hall cafeteria

Favourite watering hole:
The Ram in the Rye, the campus pub

Perks of living in this town:
Endless shopping and great concerts and sporting events

Where to live:
Pitman Hall

Best place to study:
Study room in the Library Building

Worst place to study:
The cafés around campus (too many distractions)

Most notorious bus route:
Whatever one you’re on is probably delayed

Best giveaways:
Gould Street during the Week of Welcome