1-800 Call Kate: Is there a real person behind that Newfoundland tourism ad?

Lindsay Jones: I went looking for one of the people those gorgeous Newfoundland tourism ads invite you to call. She has an elusive quality. 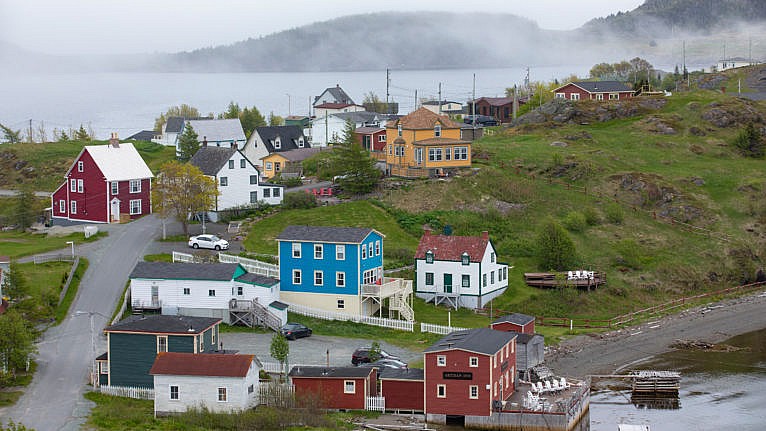 I’ve been to Newfoundland and Labrador four times. Once, the ferry I was travelling on was stuck in the ice for several days. Another time, there were gale-force winds and hail in June. A few years ago, reporting for this magazine, I sat white-knuckled on an unlit highway during a whiteout with no cellphone service. Last September, I drove more than 1,000 km all over the Rock, awestruck by the sublime landscape and the warmth of strangers who invited me into their homes. And hangry at the lack of food options.

After watching Newfoundland and Labrador Tourism’s storied sensory ads—specifically the one dubbed “Crayons,” which plays on the vivid colours of meadows, painted boats and ocean vistas—I was eager to go back. The commercials crack open a door to a world where there is poetry and piano and a candy-coloured life. The sun shines and windswept cliffs summon you to freedom and living in the moment. It’s all there, and I want it injected into my veins. Newfoundland seems an antidote to lockdown: to the stale life cooped up in my house with bickering kids and too many screens; to the oft-travelled sidewalks of my Halifax neighbourhood.

READ: These two Newfoundland towns finally have cell service after taking matters in their own hands

A woman answers the line and in a sing-songy Newfoundland brogue, tells me there is no Kate in her department. “This is the line where we take requests for maps and guidebooks,” she says. “Just let me check with my supervisor.”

I’m put on hold to the sound of Newfoundland folk songs. There’s a sea shanty about a dory and “What Do We Do with a Drunken Sailor?” Then “Lukey’s Boat,” a droll folk song popularized by Great Big Sea.

After more than eight minutes, the woman comes back on the line and gives me an email address. Send it to attention of “Kate,” she advises.

Does Kate actually work there? I ask.

READ: The sour taste of a soda tax in Newfoundland and Labrador

“From what I know, yes; just, I don’t work with her directly. I’ve only ever known her as Kate.”

She tells me she works from home, and that my call came through to her as overflow, which happens when the tourism agency’s call counts are high. “I’m right in central Newfoundland,” she says, adding: “You’re the first call I’ve taken about this.”

But over the next few days no one named Kate gets back to me. A query sent to Newfoundland and Labrador Tourism leads to a protracted series of promises to provide a response. Are they trying to rustle up Kate? Maybe she’s on vacation.

Finally, after a week, the provincial agency answers a question that must cross the mind of many a would-be traveller gaping at those commercials: there is no Kate. Or Shannon. Or Sean. Or any other living human attached to the Irish-sounding names appearing on the TV and print spots. The use of a phrase like “Call Kate at 1-800 . . . ” is a way to nudge the traveller from thought to action; to personalize the call for the user, says Debbie Marnell, a spokesperson for the tourism department, in an email: “It is the overall goal of NL Tourism to have the caller connect directly with a person on the other end of the line and not be prompted by an automated system,” she writes.

READ: Clinic 554 for sale as N.B. government refuses to cover cost of abortions outside hospitals

In other words, it’s all a bit of a fib—albeit an alluring one. A marketing gimmick that makes me think, maybe a little perversely, of those naughty 900-number ads with a cooing woman’s voice urging people to “pick up the phone.”

I’m not the only one drawn in. Newfoundland’s tourism videos are positively legendary in the advertising world. Target Marketing and Communications, the firm behind them, is based in St. John’s. Its tourism ads have won the most coveted award at the Cannes Lions International Advertising Festival, and the top prize at the Canadian Advertising Success Stories Awards, among numerous others.

Target wouldn’t comment for this story, but on its website, it describes its approach as a blend of sensory (coastline and colourful buildings), rational (what am I waiting for?) and emotional appeal (humour and humanity). The success of “Find Yourself,” its longest-running Newfoundland ad and winner of more than 400 awards, relies on the “sheer beauty of the land and the charming unpretentiousness of its people—their creativity, storytelling, music and art,” the company says on its site.

I’ll say. After long stretches over the past two years of not being allowed to leave my community, even to go for a hike, Newfoundland and Labrador’s rugged emptiness and resident giants—whales, cliffs, icebergs—would surely be a salve. A mental vacation that feels like fresh sheets blowing on a clothesline (more than likely out to sea).

Newfoundland may be greyer and colder than any tourism advertiser would willingly show, and there is no one by the name of Kate willing to help me plan my vacation. But I’m still pining to go. The place is beckoning with its WiFi free roads, doily-covered kitchen tables, Mary Brown’s Chicken and gas station snacks. It’s as if Newfoundland’s calling me by my name.