10 athletes you’ve probably never heard of, but should have

Some lesser-known names from the Canadian Sports Hall of Fame 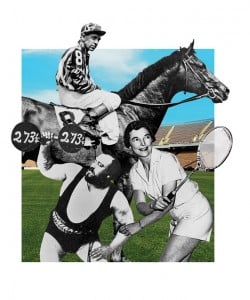 A few athletes whose achievements, the Canadian Sports Hall of Fame says, are worthy of being remembered.

1. Louis Rubenstein—figure skating: At a competition in Russia in 1890, he was crowned “Champion of the Universe.”

2. Norval Baptie—speed skating (barrel jumping): He broke every record in the early 1900s and occasionally challenged opponents to races in which he’d skate backward.

3. Dr. George Beers—lacrosse: He is recognized as the “father of modern lacrosse” and, in the late 1800s, elevated it to a national sport.

4. Hawley “Huck” Welch—football: He was a star kicker in the Canadian Football League in the 1920s and ’30s.

5. Charles “Sandy” Somerville—golf: He was the first Canadian to win the U.S. amateur championship in 1932 and was named athlete of the year.

6. Louis Cyr —weightlifting: Sometimes called “the strongest man in history,” in 1895, Cyr carried a platform with 18 men weighing 1,967 kg on his back.

7. Herb Carnegie—hockey: Hailed as the greatest black hockey player of his time in the 1940s and ’50s, he was never allowed to play in the NHL.

8. George Woolf—jockey: He rode the champion thoroughbred Seabiscuit to victory against War Admiral in 1938.

9. Cathy Townsend—bowling: She was the first Canadian woman to win the Bowling World Cup in 1975 in Manila, Philippines.

10. Dorothy Walton—badminton: She became world champion in the sport after her win at the all-England tournament in 1939.