10 reasons why ‘Dief the Chief’ and JFK hated each other 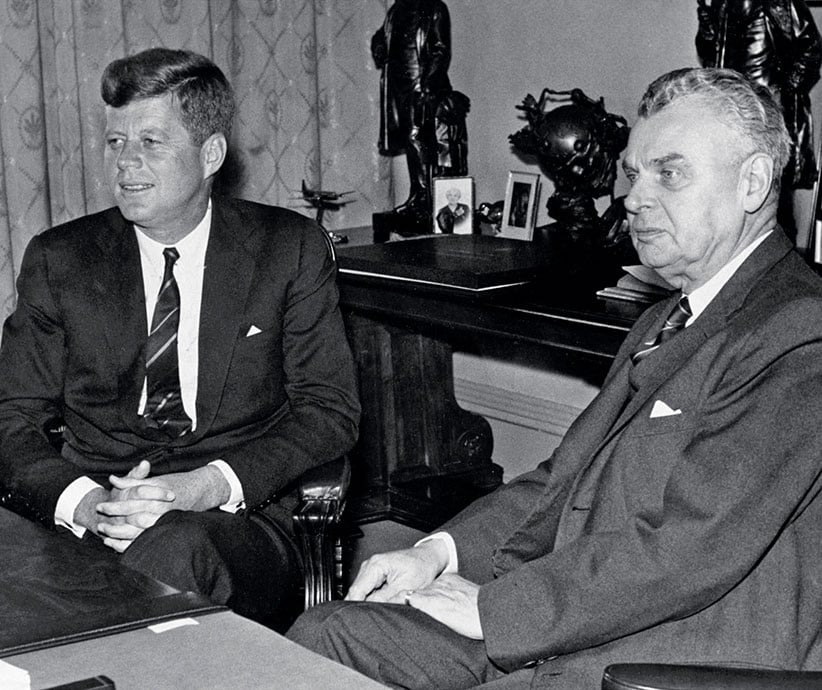 John Diefenbaker had a famously toxic relationship with John F. Kennedy. John Boyko, author of the upcoming book Kennedy and the Canadians, explains why:

1. The Difference: Diefenbaker was an anti-establishment populist. As a lawyer and a politician, he devoted himself to defending the powerless against those whose family, wealth and connections afforded unearned advantages. Kennedy represented everything Diefenbaker despised. Before they even met, Diefenbaker dismissed him as shallow and over-privileged.

2. The Delay: With the razor-close presidential election decided, Diefenbaker sent Kennedy a congratulatory letter. He then waited for a response—and waited. He eventually had his ambassador in Washington ask whether the letter had been received. Only then did Kennedy reply. Diefenbaker believed he and Canada had been slighted.

3. The Name: While seeking political office in the shadow of two world wars, Diefenbaker’s German name often invited derision. He remained sensitive to slurs regarding it, so he was insulted when, at their first meeting, Kennedy called him Diefen-bawker. Upon his arrival for a visit to Ottawa, Kennedy repeated his error.

4. The French: The unilingual Diefenbaker always attempted a little French, and did so when welcoming Kennedy to Ottawa. Kennedy told the crowd he had not intended to attempt French, but, after hearing the prime minister, thought he’d try. Having been schooled by his bilingual wife, Kennedy spoke surprisingly well. Diefenbaker felt humiliated.

5. The OAS: At a private meeting, Kennedy said he wanted Canada to join the Organization of American States. Diefenbaker said no, as it would restrict Canada’s interactions in the hemisphere. Later, in his speech to Parliament, Kennedy broke protocol by urging publicly what the prime minister had already declined privately. Diefenbaker sat steaming.

6. The Tree: Diefenbaker escorted Kennedy to the governor general’s residence for a ceremonial tree planting. Inspired by Diefenbaker’s enthusiastic shovel work, Kennedy dug in and promptly reinjured his back. It led to his being distracted by intense pain during a summit with Soviet leader Nikita Khrushchev shortly afterward, and to enduring a brace for the rest of his life.

7. The Document: Kennedy inadvertently dropped a secret memo in Diefenbaker’s office. It listed areas where Canada should be “pushed,” and in the margin he had apparently scribbled “SOB.” Diefenbaker threatened to release it. The protocol breach angered Kennedy. He denied the doodle, saying he didn’t know Diefenbaker was an SOB—at that point.

8. The Nukes: The U.S. wanted to station nuclear weapons in Canada. Diefenbaker said he would acquire them if Canadian sovereignty and civilian control were guaranteed, and then only after exhausting attempts at global disarmament. Kennedy was frustrated by what he and many Canadians interpreted as indecisiveness.

9. The Boredom: The worst punishment one could inflict on Kennedy was boredom. After their first meeting, he told aides that Diefenbaker was tiresome. British prime minister Harold Macmillan arranged a lunch in Bermuda and kept Kennedy from fleeing only with the promise that he never be left alone with Diefenbaker.