Can Lassie do this? Didn't think so. 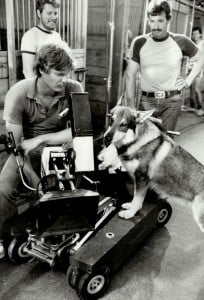 The Littlest Hobo proved heroic Canadian dogs are cooler than anyone else’s. Can Lassie do this?

1. Deliver antidote to a poisoned child via parachute (“Smoke”).

2. Help a Russian ballerina defect from the commies (“The Defector”).

3. Prove the Sasquatch was a guy in a gorilla suit (“The Secret of Red Hill”).

4. Steal a painting from a mafia boss’s safe (“Big Al and Sam Strawberry”).

5. Convince the estranged parents of a hospitalized boy to get back together (“The Pied Piper”).

6. Expose a con artist by finding a relevant newspaper article about him, something even journalists have trouble doing (“Fast Freddie”).

7. Break an evil therapist’s hypnotic spell on a supermodel, thereby foiling a dastardly plot to let another girl get her modelling job (“Mystique”).

8. Transfer a cache of Second World War munitions to a safe place before it blows up a field full of cute kids (“Pandora”).

9. Save Megan Follows (the future Anne of Green Gables) from a poisonous snake, electrified car and earthquake (“The Spirit of Thunder Rock”).