2020 was the year that changed everything

The pandemic, political upheaval and an economic crisis have exploded truths and ideas that mere months ago seemed so fundamental they were beyond question 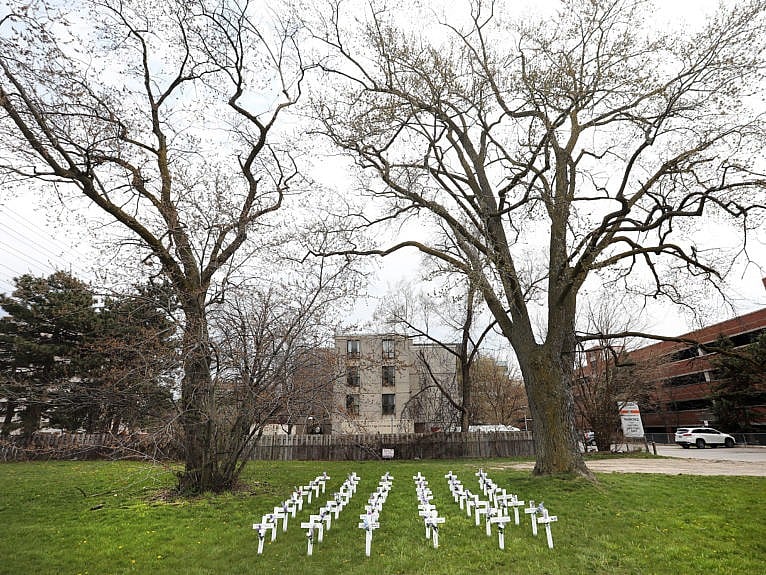 Crosses on the lawn of the Camilla Care Community nursing home in Mississauga, Ont., in May, representing the residents who died of COVID-19 (Richard Lautens/Toronto Star/Getty Images)

This has been a year of realizing that what we thought was solid ground beneath our collective feet was in fact a cliff that would crumble away with just a bit of natural erosion or one sharp blow.

The COVID-19 pandemic—along with the worldwide shutdown and economic and emotional devastation it has wrought—has forced a reckoning that so many of the things we counted on, from the utterly mundane to the profound, are simply not as true or sure as we always believed them to be.

And there is no Get Out of Jail Free card for anyone in this, though there are certainly people who are serving harsher sentences than others. Canadians caught a glimpse of this levelling effect in the earliest days of the lockdown, when Sophie Grégoire Trudeau tested positive for the virus and Prime Minister Justin Trudeau was in quarantine purgatory for two weeks, giving his daily news briefings from a healthy distance outside his home.

“I don’t think, at least in what we would call the Western world, there’s an equivalent event unless you go back to World War II. And I’m not saying this is as bad as World War II,” says Sean Mullin, executive director of the Brookfield Institute for Innovation + Entrepreneurship. “But our societies are so complicated, and people’s lives are so individualized and detached and disconnected from the collective activity of a country, that to have an event that simultaneously impacts everybody in the country—and not just in our country, but in almost every country in the world—just that in and of itself is incredibly different.”

Even events as seismically where-were-you-when as 9/11 or the 2008 financial crisis directly affect only a small proportion of people, he points out, while this pandemic and its attendant upheaval have brought the normal lives of virtually everyone to a screeching halt.

And this pandemic has been cruelly adept at dismantling what we once took for granted. It has upended both the “truths” so fundamental that we assumed they were beyond question, like faith in political leaders or democracy itself, and the ordinary things that gave rhythm to our lives—grocery shopping or going to the gym—and afforded a sense of security and control that was invisible, until it collapsed.

What does it do to us when so much of what we once counted on—or more accurately, when the things so seemingly unquestionable that no one even thought to count on them—suddenly fall apart? We examine 14 of these supposed truths and how the events of 2020 have thrown them into question or outright dismantled them.

Professional advice on coping with anxieties about big, existential things over which you have no control often centres on focusing on what you can control or finding a little peace in small moments of normalcy. You can’t steer a flood away from your house or fend off the cancer that is weakening a loved one, but you’re supposed to focus on the comforting ritual of making breakfast and walking your child to school, grabbing a drink with friends or a few moments lost in the sweaty oblivion of exercise.

But as the world turned itself off like a light switch in a defensive crouch against COVID-19, all those tiny bits of normal, quotidian life that might have provided us with some sense of solace and control became fraught, difficult or simply unavailable. No routine. No place to go. Nothing to do. No one to gather with. Even the errands that once seemed like the mundane background noise of life became rushed and rationed forays to collect necessities as efficiently as possible.

And on the other hand, when the scaffolding of our everyday lives is crashing down around our ears, we are supposed to be able to draw comfort and a sense of perspective from the big, overarching things we can still count on. But if that is supposed to feel like gazing up at a smattering of stars across the night sky, feeling both your own cosmic smallness and the essential comfort that comes from that, 2020 has been to look up and see nothing but an unblinking smudge staring back at you. The stock market can be a hall of funhouse mirrors, women are apparently not permanent lifetime members of the workforce, and as great as virtual everything is, it turns out we crave real life and other people.

We’re supposed to think big when the small things are dragging us down, and delight in the little things when the big stuff becomes too much, but the pandemic undermined and wiped out all of that in one go. When everything from democracy and the might of wealthy nations to your ability to feed your family and procure basic supplies feels under threat, what are you supposed to cling to for some sense of security and normalcy?

In the earliest days of the lockdown in North America, the Harvard Business Review talked to David Kessler, describing him as “the world’s foremost expert on grief.” Kessler co-wrote Elisabeth Kübler-Ross’s 1969 book On Death and Dying, which has become a manual on grief so seminal that even if you’ve never glanced at it, you can probably list the five stages: denial, anger, bargaining, depression and acceptance.

The opening question to Kessler was touchingly childlike in its grasping for a coherent shape to pour everything into: we’re all feeling a lot of things right now, the writer asked, is some of this grief? “Yes, and we’re feeling a number of different griefs. We feel the world has changed, and it has,” Kessler explained. “The loss of normalcy; the fear of economic toll; the loss of connection. This is hitting us and we’re grieving. Collectively. We are not used to this kind of collective grief in the air.”

He went on to explain that one of the forms of grief hitting people back in the spring was “anticipatory grief”—the anxiety of an uncertain future and the tendency to rehearse our own sadness over events that haven’t happened yet. “There is a storm coming. There’s something bad out there,” Kessler told HBR. “With a virus, this kind of grief is so confusing for people. Our primitive mind knows something bad is happening, but you can’t see it. This breaks our sense of safety.”

Now, many months down the road from that interview, we have all passed through a spring of fearful paralysis, a summer of relative reprieve and into a fall of spiking case numbers and mounting dread; we have arrived at the dark place our anticipatory grief once pointed to, only now we’re all many months more exhausted and bereft.

Like all painful uprootings, of course, there are opportunities for growth in this moment. If we were once so sure that climate change couldn’t be stopped, our recently discovered ability to entirely change the way we live in the space of a few days suggests that isn’t true—and there is both hope and a harsh ultimatum in that. Confronting the fact that rich countries cannot, in fact, weather any storm easily could spark empathy and humility as we realize that there are moments when none of us can buy ourselves protection and comfort, so perhaps we should look out more for those who never can. And while the endless capacity of human beings to adjust to anything and soldier on—even while detesting the phrase “the new normal”—suggests that on some future day we may go back to taking these things for granted, there is also a hope that we will never completely forget the ordinary miracle of taking kids to a playground or running into a grocery store because you forgot just one item you really want.

Because if we are all living out some constantly roiling, collective mourning experience with an unknown end date, it may help to remember that Kessler’s work contains a lesser-known sixth stage of grief that answers what comes after you survive all the rest of it: meaning.