Learn more about the father of standard time 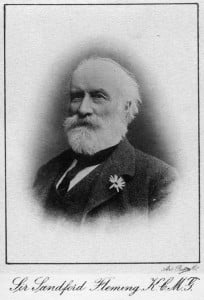 Few Canadians have had such a profound impact in as many areas of public life as Sir Sandford Fleming (1827-1915).

1. Surveyor, draftsman, engineer and college chancellor, Fleming is widely considered the father of standard time, but, in 1848, at the age of 21, he also designed and patented what is likely Canada’s first in-line skate.

2. Fleming designed the “three-penny beaver” in 1851, Canada’s first postage stamp. He chose the beaver as the central image and helped to popularize the industrious animal as a distinctively Canadian emblem. Canada’s postmaster general had wanted Queen Victoria to appear on the first Canadian stamp. Fleming designed other stamps, including the “12-penny black.”

3. Fleming was the leader of a group of civil engineers, architects and surveyors who helped to found the Royal Canadian Institute in Toronto in 1849, a society dedicated to the “encouragement and general advancement of the Physical Sciences, the Arts and Manufactures.” Fleming also designed the RCI’s crest and was primarily responsible for the institute’s Canadian Journal.

4. Associated with the Ontario, Simcoe and Huron Union Railroad beginning in 1852, Fleming embraced the idea of a transcontinental railroad and presented the first detailed plan for building a Pacific railway to the Canadian government in 1862. He would later be appointed chief engineer of the Pacific railway.

5. Beginning in 1879, Fleming championed a trans-Canada telegraph with an underwater cable linking Canada and the Pacific. His unrelenting pressure helped to create an imperial cable committee to steer the project, and his vision was realized when Canada was connected to New Zealand and Australia, beginning in 1902.

6. In 1883, Fleming co-founded the Alpine Club of Canada at the summit of Roger’s Pass during an expedition across the Rockies as part of his duties as chief engineer of the Canadian Pacific Railway. Fleming is one of three prominent individuals in the photograph chronicling the driving of “the last spike” at Craigellachie, B.C.

7. The creation of a transcontinental railway in Canada suddenly required standardized times for train arrival and departure times. Fleming chose a global approach to solve the problem by developing a 24-hour international clock based on the world globe meridian of Greenwich, England. Standard time was adopted internationally in 1884.