A crash course in how the feds could improve gender equality

Anne Kingston: The real lessons in a ranking of best cities for women: that the gender gap persists across Canada—and the solutions are staring us in the face 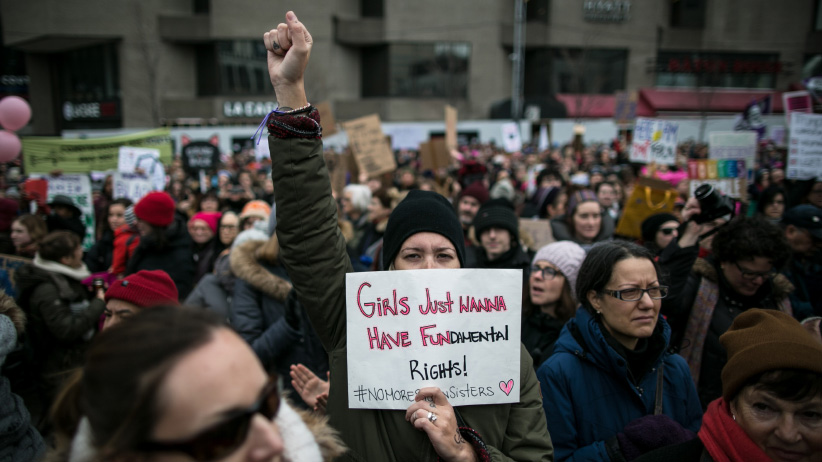 Thousands of people gathered in Montreal in support of women’s rights in January, as thousands did in Washington, D.C. after the inauguration of Donald Trump (Amru Salahuddien/Anadolu Agency/Getty Images)

On Tuesday, the Canadian Centre for Policy Alternatives released its annual analysis, The Best and Worst Places to be a Woman in Canada: “The Gender Gap in Canada’s 25 Biggest Cities. The study, now in its fourth year, is destined to garner headlines; people love to know where they rank in the big picture. Certainly a glance at the results might inspire women who live in Victoria, Gatineau, Que., and Hamilton, Ont. (ranked first, second and third, respectively) to celebrate. Likewise, women in Barrie, Ont., Oshawa, Ont., and Windsor, Ont. (ranked at the bottom at 23rd, 24th, and 25th) might consider plotting their escape.

Not so fast. A deeper read of the report indicates that yes, some places may be better for women, but there’s no escaping the gender gap. Inequities exist right across the country, Kate McInturff, a senior researcher at CCPA, tells Maclean’s. For one, Canadian women are underemployed (more than 670,000 women work part-time involuntarily). Women earn less than men, even when they have the same education, experience and work in the same field. Women also put in an extra 10 hours of unpaid work, on average, often due to of inadequate childcare. Females are also more likely than males to be the victims of violent crime, according to Statistics Canada.

McInturff puts it in perspective: “This isn’t about whose city is richest and whose economy is best and whose is doing worse. This is about whether men and women have equal access to goods and well-being compared to each other, given what is available in that city.” She’s interested in trends, even though they don’t feed into the scores of the individual cities: “Are things getting better? Is the wage gap getting smaller? Is the employment gap getting smaller? Are poverty rates going up or down?” she says. “It’s to provide context and to make the point that we really aren’t seeing progress in some cases at the local level; we’re actually seeing things getting worse.”

McInturff, director of CCPA’s initiative on gender equality and public policy, Making Women Count, assessed a number of variables (access to economic security, personal security, education, health, and leadership positions) employing methodology used by major international gender-equity studies; she also added a “violence against women” category. Statistics on this at the local level are poor, she says, limited to police reporting, which is notoriously incomplete; only one in 20 sexual assaults are reported; of that paltry five per cent, 19 per cent are deemed “unfounded,” meaning the police decided there wasn’t a crime to investigate. Still, it’s a crucial indicator: CCPA’s studies indicate violence against women affects over a million Canadian women.

RELATED: Who benefits most from the Liberals’ new child-care benefit?

“Statistics will never be a substitute for the full experience of lives lived,” McInturff writes. But they do provide a roadmap: both insight into where fault lines exist—and where policy helps. In conversation with Maclean’s, McInturff explains some of the report’s findings and what policy changes, in her opinion, would  make Canada a better place for all women to live.

Why Gatineau ranks second and Ottawa, a 15-minute drive away, ranks 11th:

“Gatineau does significantly better than Ottawa in electing women to office at all levels and putting them in leadership positions,” McInturff says. “Ottawa needs to step up.” Both cities benefit from a large public-sector employer—the federal government—which helps with economic security, she says. “More women are in full-time work; the wage gap is smaller. Also, the public sector is unionized, she points out; extensive research across high-income countries shows the presence of a union makes a big difference in narrowing the wage gap and the employment gap.”

Why Quebec outperforms in terms of the gender gap:

Five words: universal accessible and affordable childcare. “It’s the number one lever that the government has to improve women’s economic well-being,” McInturff says. Since Quebec instituted its subsidized child-care system in 1997, over 140,000 single mothers have moved out of poverty, she says, adding that access to daycare is seen to be a reason why women’s employment in Quebec held steady after the 2008-09 global recession, while it declined in other provinces. She points to a recent OCED paper that indicates that, outside of Quebec, Canadian women experience a net loss in household income when they go back to work and put their youngsters in child care.

Currently, the federal government is at the end of negotiations with the provinces for child-care funding. “It is encouraging that they’ve committed funding,” McInturff says. “It is discouraging that they’re not as ambitious as they could be and are not aiming for a universally subsidized national child-care program.”

RELATED: Advancing women’s equality could mean a windfall for all Canadians

Quebec also has proactive pay equity legislation on the table, McInturff says. At the federal level, a special parliamentary committee on pay equity issued its report a year ago; the government committed to tabling legislation in 2018. “I don’t know why we’re waiting for 2018, but better late than never,” McInturff says. “The coming year will show us if the government is prepared to put forward policies to address those gaps.”

Five actions the government could take to improve gender equality:

RELATED: Why parental leave rules are shutting out dads

Finally, why women in Windsor have reason to be hopeful:

One rationale for The Best and Worst Places to be a Woman in Canada report, McInturff says, is to provide a platform for organizations in these cities to talk to their communities, and raise issues with municipal governments. “We have this huge pool of insight and passion in organizations that are underfunded and understaffed, she says. “I don’t want people to think no one is working on this; communities are full of organizations trying to make their cities better.” In the report, she cites the documentary Her Windsor, filled with inspiring stories of women affecting social change in the border city. As a smaller, close-knit community, they were able to make changes that might have been harder if in Toronto or Vancouver or Montreal, McInturff says: “What women are saying in Windsor is that with a little more support and more resources, we have the opportunity to be a great place for women to live.” As this roadmap of a study makes clear, it’s a mantra that applies to the country as well.