A fan's guide to Tuesday at the Games 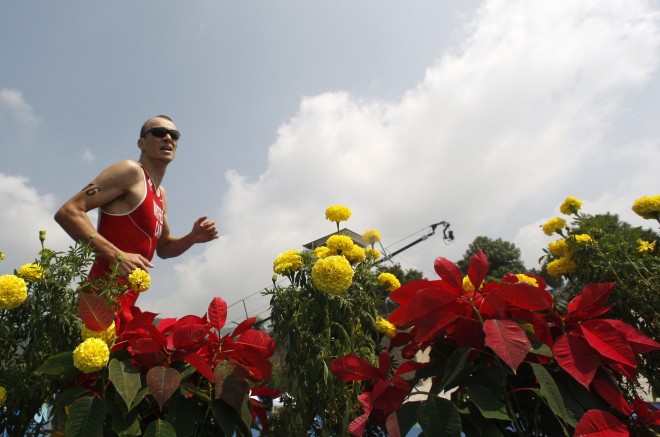 At the start of the 2012 Summer Games, he carried the flag for Canada, snapping photographs and signing autographs on his way into the stadium. He has since emerged  Canada’s biggest cheerleader and a defender of his fellow athletes. Today, alongside teammates Kyle Jones and Brent McMahon, it’s his turn to compete.

Update: Whitfield crashes out in the early portion of cycling.

Less than two months ago, Alexandre Despatie might have been wondering if he’d be at the London Games. While attempting an inward 3.5-somersault during training, Despatie hit his head on the board and nearly tore off his scalp. He suffered a concussion. A 10-cm gash on his forehead was a harsh reminder of the dangers of his sport.

But the former world champion and two-time Olympic silver medallist climbed right back up. After a disappointing sixth place finish in synchronized diving with Reuben Ross, Despatie is prepared for what might be his last chance for Olympic hardware.

Synchronized swimming isn’t always what you might think. Last years in duets, Canada won a gold accompanied by music from metal band Metallica. This year, their choreography will reportedly be heavily inspired by soccer.

Canada’s duo Elise Marcotte and Marie-Pier Boudreau Gagnon were in fourth place after the first round of qualifying, and you can be sure they will be in the hunt for the goooooooooooooooooooooold.

Punching his way through:

Custio Clayton is one punch away from an Olympic medal. Well, maybe it’s more like a flurry of punches. While all of Canada’s boxing hype surrounds a certain Cover Girl (Mary Spencer), Clayton has put together two impressive wins en route to the welterweight quarter-finals. He beat Mexican Oscar Molina in the opening fight, avenging a  2010 Pan-Am games defeat, and followed that up with an impressive third round to win his next bout over the Australian Cameron (The Hammer) Hammond.

Up next for Clayton is Britain’s own Freddie Evans for a spot in the semi-finals. Unlike most sports, there is no bronze-medal match in boxing, so a win over Evans would secure a medal for Clayton and Canada.

Canada’s basketball team has come close to breaking through, but come up short on several occasions. They were so close to upsetting world No. 2 Russia in their opening match, but a collapse in the final five minutes led to a loss. Canada then beat a favoured Brazil team, before losing to Australia (tied for world No.2).

Though Canada qualified for the knockout round, it will need an epic game to defeat the heavily favoured United States. Then again, a win would put the team in the history books for women’s basketball. After the tip-off, anything can happen.

Disappointment in the ring: Mary Spencer was a gold-medal hopeful, a world champion and a Cover Girl spokeswoman. This all meant little to Li Jinzi of China, who was first to the punch of four rounds, beating Spencer in the quarter-finals. Canada’s boxing fans now turn to Custio Clayton for hopes of bringing home the country’s first gold since Lennox Lewis won in Seoul 1988.

Paddling to the finals: There’s a reason Adam van Koeverden is known as Van Kayak. The 2004 gold medallist cruised through the opening heats of the 100-m kayak sprint, and posted the best semi-final time by more than a second. In the canoe, Mark Oldershaw also powered through with the third best time in the semi-finals. Both men will paddle for gold Wednesday morning.