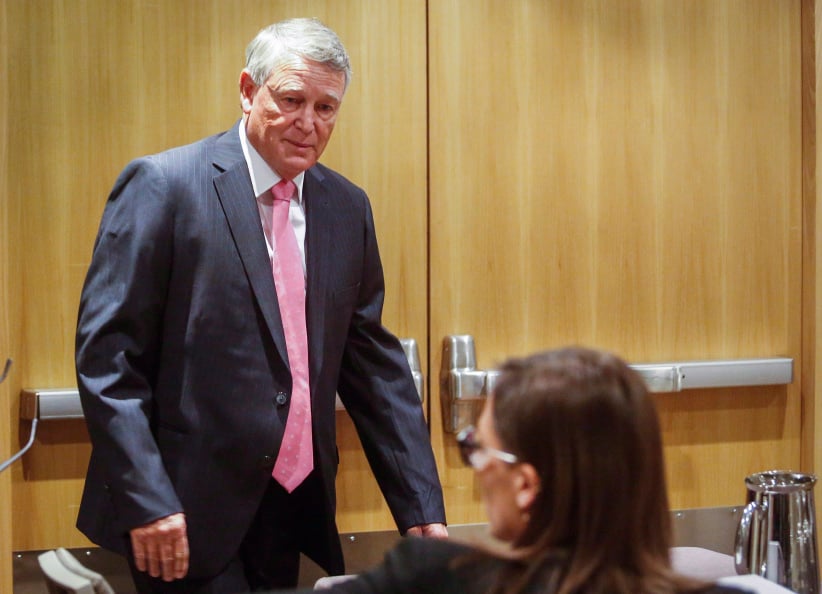 The three judges and two lawyers on a Canadian Judicial Council inquiry committee have unanimously concluded that Justice Robin Camp is unfit to remain on the bench, after his conduct in a rape trial gave him a national reputation as the judge who asked a sexual assault complainant why she couldn’t keep her knees together.

Their recommendation now goes to the full Canadian Judicial Council, who will pass its own recommendation on Camp’s fate to federal Justice Minister Jody Wilson-Raybould and a possible parliamentary vote. Judges who get this far toward losing their jobs sometimes resign before being pushed, but Camp’s only comment Wednesday, through a lawyer, was that he “is grateful to the inquiry committee for its thorough consideration of the evidence and his submissions.”

The panel’s consideration went well beyond the “knees together” comment. There were several remarks the judge made in a 2015 Calgary sexual assault trial that drew complaints from legal experts, the public and Alberta’s justice minister. In the first case of its kind, this committee effectively sketched out limits on what is acceptable or unacceptable to say from the bench when conducting such a trial. Much of what Camp said fell outside those limits, and peddled long-discredited myths about rape and sexual assault victims, the two men and three women on the committee concluded.

The inquiry concluded that 17 of the 21 allegations were fully substantiated, while another two were partly substantiated. The panellists wrote in their report that his misconduct severely damaged public confidence in his role as an impartial jurist, and that remedial education he was receiving couldn’t offset that damage.

Here’s how the panel responded to the 21 allegations against him:

What Camp said: At multiple points during the trial, Camp made negative remarks about Canada’s “rape shield” legislation that’s designed to protect the integrity of vulnerable witnesses.

The committee said: “His comments were gratuitous and stemmed from a limited understanding of what he was so quick to criticize. Moreover, his criticisms were not based on thoughtful analysis nor even any analysis at all.” Allegations substantiated

What Camp said: He questioned whether the complainant “abused the first opportunity to report.”

The committee said: “Taken alone, the various comments might be seen as merely an unfortunate way of expressing himself, but taken in the context of his other related utterances, it is clear that Justice Camp held a bias, whether conscious or unconscious, in the form of an antipathy toward the present laws governing sexual assault trials.” Substantiated

What Camp said: “Young wom[e]n want to have sex, particularly if they’re drunk.”

The committee said: “We accept that the judge was essentially noting that people generally, both men and women, tend to be less inhibited when intoxicated than when not intoxicated … [This] did not reflect a rape myth or stereotypical thinking about women intending to signal their sexual availability by drinking alcohol.” Not substantiated

What Camp said: Told the Crown that the old belief one should report an assault as soon as you can “had its reasons” in “every civilized legal system in the world for thousands of years.” (Currently, Canadian case law follows the “recent complaint doctrine,” which doesn’t hold such delays against a complainant.)

The committee said: “We find that in their context, and in the context of the Judge’s other related utterances, his bias, whether conscious or not, led him to express disdain for the law in its current state.” Substantiated

What Camp said: On several occasions, he questioned why she didn’t fight off her alleged aggressor and her lack of visible reaction to the alleged assault.

The committee said: “The Judge was clearly evaluating the evidence before him by measuring it against a stereotypical view of how a woman should react to a sexual assault, or the threat of one… His comments reflect a classic victim-blaming attitude.” Substantiated

What Camp said: Hypothesized the complainant was seeking revenge against the accused, which was not based on evidence before the judge.

The committee said: “The revenge idea was clearly in the Judge’s mind independent of the evidence. That being said, because there was a basis in the evidence for the Judge’s question of the Crown at page 414 of the Trial transcript, we would not wish to be taken as finding that asking that second question was misconduct.” Partially substantiated

What Camp said: Suggesting the complainant’s character would make it more likely she consented to sex.

The committee said: “While the Judge later commented that the complainant was entitled to the full protection of the law despite her criminal record and addiction problems, this statement does little to attenuate the harshness of his earlier comments, which, in our view, constituted misconduct.” Partially substantiated

What Camp said: Asked the complainant: “Why didn’t you just sink your bottom down into the basin so he couldn’t penetrate you?” and “Why couldn’t you just keep your knees together?” Camp later suggested “if she skews her pelvis slightly she can avoid him.”

The committee said: “We do not accept that the Judge’s conduct was simply use of ‘inappropriate and insensitive language’ or merely reflective of a lack of understanding of the neurobiology of fear and trauma. Rather, we conclude that his conduct was motivated by his biased belief that women should resist—that they should “fight off aggression”—or be taken as having consented.” Substantiated

What Camp said: In response to the Crown counsel’s assertion about “antiquated thinking” of sexual assault law, he replied: “I hope you don’t live too long, Ms. Mograbee.”

The committee said: “His comments are reasonably understood as being disparaging of legislative attempts to remove discredited myths from sexual assault law. A reasonable informed observer would understand these words in context to mean that Justice Camp was suggesting that the pendulum will surely someday swing away from the reforms back to the former ways of “every civilized legal system.” Substantiated

What Camp said: “Some sex and pain sometimes go together […] that’s not necessarily a bad thing.”

The committee said: Given his acknowledgement that the complainant had clearly conveyed that she was not enjoying the pain, his gratuitous comments… would be interpreted by a reasonable person as belittling and trivializing the complainant’s allegations. Substantiated

What Camp said: “Sex is very often a challenge.”

The committee said: “…would leave a reasonable person with the impression that he was endorsing a “problematic” (to borrow the Crown’s adjective) view of sexual interactions between men and women that underlies many discredited rape myths.” Substantiated

What Camp said: “I don’t believe there’s any talk of an attack really.”

What Camp said: “There is no real talk of real force.”

The committee said: “Read in context, a reasonable person would interpret these remarks as belittling and trivializing what the complainant alleged happened in the bathroom and also reflecting a victim-blaming attitude and the discredited myth that women who do not actively resist are consenting.” Substantiated

What Camp said: “She knew she was drunk … Is not an onus on her to be more careful?”

The committee said: The transcript suggests he was asking for clarification regarding a point the Crown made about taking reasonable steps to ensure consent. “The manner in which the question was framed and its connection to the fact of the complainant’s intoxication remain problematic, but we do not think it is appropriate for this Committee to parse the Judge’s words and infer biased thinking where an alternative plausible explanation for the impugned remarks has been proffered.” Not substantiated

What Camp said: Asked the Crown if, to obtain sexual consent, there are “any particular words you must use like the marriage ceremony.”

The committee said: “In our view, Justice Camp was not simply asking a serious question flippantly. Rather, he was expressing disdain for the serious issue addressed in [Criminal Code’s subsection on ascertaining consent] by using flippant language.” Substantiated

What Camp said: Urged the accused to tell his male friends “they have to be far more gentle with women … To protect themselves, they have to be very careful.” And, “Please tell your friends so that they don’t upset women and they don’t get into trouble. We’re far more protective of women … and that’s the way it should be.”

The committee said: “The Judge’s remarks thus identify an ‘upset’ woman as the cause of potential trouble, not an accused’s conduct. The remarks also insinuate that making sure ‘the girl wants you to do it’ is less about obtaining her consent and more about avoiding trouble.” Substantiated