The new royal baby may have taken a while to arrive, but she made an entrance 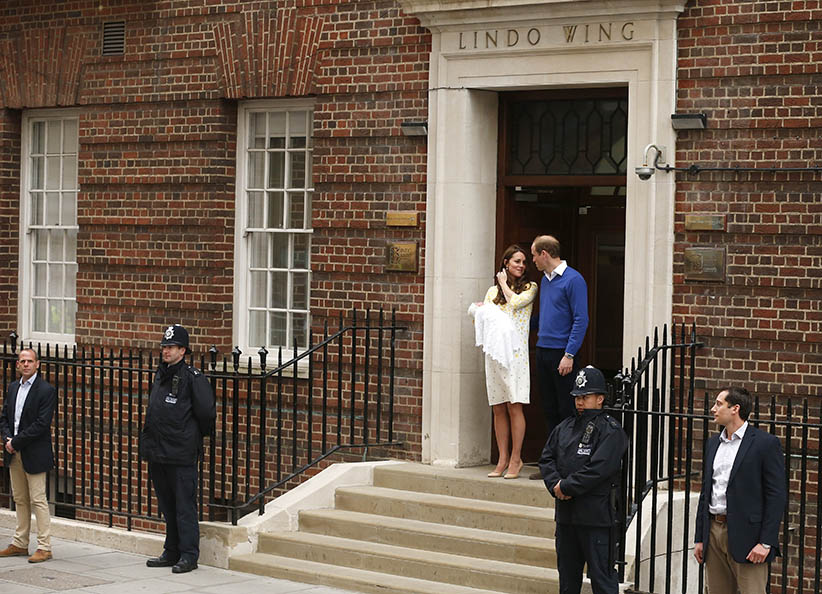 Just before 6 a.m. Kate had been admitted to St. Mary’s Hospital in the early stages of labour. The Great Kate Wait was almost over, though no one knew how quickly it would end. The in-labour announcement was made at 8 a.m., after a night of Royal Baby Blackout (the Queen is 89, and she’s told first, so nothing happens between 10 p.m. and 8 a.m, so Her Majesty can enjoy her sleep).

Royal watchers got to camp out in front of the hospital’s Lindo Wing, and everyone settled in for a day of saying everything about absolutely nothing. Then, at a few minutes after 11 a.m., came news from Kensington Palace: 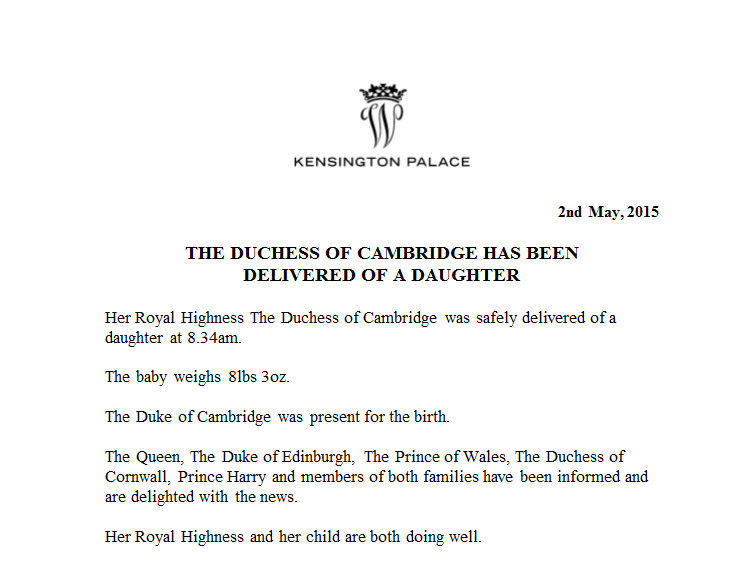 The easel at Buckingham Palace giving details of the birth of The Duke and Duchess of Cambridge’s daughter today pic.twitter.com/0yp1lNi462

Kate gave birth a mere two-and-a-half hours after being admitted to hospital. The sixth stage of the Great Kate Wait was over almost before it began. Needless to say, Twitter exploded with everyone and anyone getting into the congratulatory act. Even the Queen wore pink.

The Queen is wearing pink today – for a girl? via @tommywilkinson #RoyalBaby pic.twitter.com/0HXwDuYPYO — PA Royal Reporters (@PARoyal) May 2, 2015

She’s here! Congratulations to The Duke and Duchess of Cambridge on their healthy baby girl. #RoyalBaby pic.twitter.com/H3yqqTg5vY — British Airways (@British_Airways) May 2, 2015

Graphic shows how Twitter spiked in traffic when the royal baby was born: pic.twitter.com/MYAnDQof9z

A flood of royal commemorative souvenirs started flooding onto the market, now that retailers knew themes would be princess-related (lots of pink, purple and a surprising amount of neutral green).

Before anyone could catch their breath came word that Kate’s hairdresser was seen entering the hospital, and that meant only one thing: that William and Kate weren’t going to spend a night in hospital but rather would leave with their new daughter for Kensington Palace, where big brother George was being entertained by his grandmother, Carole Middleton. By 4 p.m. George was at the hospital, waving to the crowds of media from the arms of his dad, William, who’d done a quick dash home to collect him. There were no smiles from George, but at least everyone got a glimpse of him. After all, it was only the third officially sanctioned appearance of the future king in Britain. (The first was his birth, the second his christening, back in October 2013).

Then, at around 6:15 came the pictures everyone wanted. From arriving in hospital, to leaving, just 12 hours had passed.