A rabbi walks into a gay bar: After Orlando, a pride revolution

In once-unsympathetic cities like Surrey, in churches and Orthodox synagogues, the senseless violence of Orlando has sparked a movement 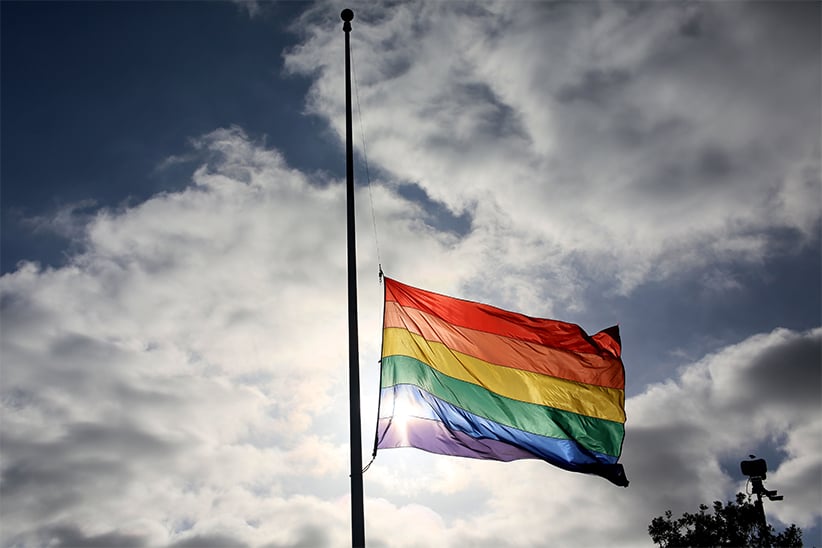 Later this month, Surrey is hosting its first-ever gay pride parade. B.C.’s second city also announced plans this week for its first ever LGBT prom. This is the same city that for years has refused to erect a Pride flag, on a series of wobbly excuses—there was no pole for it, council once claimed. In 2014, council reaffirmed a policy barring any flag except the civic, provincial and national flags from Surrey City Hall—one that curiously exempted the Olympic flag.

But earlier this week, without a word of explanation, Surrey suddenly, and completely, backed down, unveiling a Pride flag, and lighting the plaza outside City Hall with a rainbow of colours. This week, the Vancouver suburb became one of three conservative B.C. communities to unfurl the multicoloured flag at city hall for the first time. Nanaimo is also planning its first-ever Pride parade.

The Southwestern Ontario city of Woodstock is doing the same. So is Truro. For years, the tiny, Nova Scotia town had been steadfastly refusing to fly the Pride flag. Mayor Bill Mills claimed his Christian faith somehow barred him from allowing it, a bizarre extension of religious exceptionalism. No more. Truro’s inaugural Pride parade goes ahead later this month.

What’s brought on this rapid, national change from some of Canada’s most resistant corners? Orlando—the horrific murder of 49 young people, many of them gay, lesbian, bisexual and trans, who were killed at Pulse Nightclub last Sunday.

“It rocks you to the core—think of what these poor families have had to go through,” Truro Coun. Gregory MacArthur told the CBC. In Woodstock, the flag-raising was begun with a moment of silence to honour those victims. All Surrey’s four flags are currently at half-mast, showing solidarity with the victims of “hate” in Orlando, according to Surrey Mayor Linda Hepner. Two years ago, as a councillor, Hepner voted against allowing the Pride flag to grace City Hall.

The outpouring of support from unlikely allies is not a Canadian curiosity. In a moving, tearful address at a Utah vigil for the victims of Pulse, the state’s Lt. Gov. Spencer Cox apologized for his past homophobia, and the ways he treated gay and lesbian kids growing up in small rural Fairview: “I will forever regret not treating them with the kindness, dignity, and respect—the love—that they deserved,” said Cox, a Mormon, who challenged straight Americans to embrace the gay community.

The thing is, the Spencer Coxes and Linda Hepners of the world are not the anomaly. Political murder has a curious tendency to upend the intent of those wielding the guns. Abraham Lincoln’s murder didn’t bring the end of slavery: It hardened opinions against it. Martin Luther King’s killing helped propel the civil rights movement. When Harvey Milk was gunned down in San Francisco, he left a legacy of acceptance and tolerance of gay people, which gave rise to the gay rights movement that spread throughout the U.S., and beyond.

Senseless murders like these generally don’t fuel anger, hate and mistrust or allegiance for murderers like Mateen and their demented belief systems. The widespread grief and pain instead tend to bring out what Lincoln called the “better angels of our nature.” They unearth sympathies we might never have acknowledged or recognized. They show us the errors in our ways—what can happen when bigotry is allowed to suppurate, when minorities are allowed to be vilified, marginalized and scapegoated by political and religious authorities. The assault on Pulse didn’t happen in a vacuum.

Omar Mateen’s true intent is of course still far from clear. The gunman’s family says the New York-born 29-year-old knew almost nothing about Islam. And he understood so little of the politics of the Middle East that he simultaneously pledged allegiance to three de facto warring terrorist organizations. But hate was clearly the motive; and his target was the LGBT community.

Funerals for those who died at Pulse have only just begun. The grief among gay, lesbian, bisexual and trans people, for whom this hate is all too familiar, is still raw. But amid the anguish, it is becoming increasingly hard to ignore the ember of something beautiful; a hope that Orlando’s legacy will not be more of the same.

By Sunday morning, you could see this in the moving photos showing hundreds of people lining up around and around the block outside a Florida blood clinic. You could see it in tweets from Muslim leaders urging adherants to break with Ramadan for the cause: “A broken fast can be made up. A life lost is gone forever,” the Islamic Centre of Orlando posted to its website.

You could see it in the emotional coming-out of a bisexual man living in the United Arab Emirates; his move triggered a wave of others, who came out online as gay or bisexual. You could see it in the Orthodox Jewish congregation from Washington, D.C. who travelled to Fireplace, a gay bar catering to African Americans, as an act of solidary. There, one young man broke down on learning why they had come. His cousin had been killed at Pulse. Congregants lit memorial candles, held hands with those at the bar, and sang soulful songs.

You could feel the sentiment in the words of Bishop Robert Lynch of St. Petersburg, Fla., who acknowledged that religion, including Catholicism, “often breeds contempt for gays, lesbians and transgender people,” and that this contempt—appalling sentiments like “love the sinner, hate the sin”—can and do lead to violence.

For Rabbi Shmuel Herzfeld, the legacy of Orlando is already clear: “I learned when a rabbi and members of an Orthodox synagogue walk into a gay African American bar, it is not the opening line of a joke but an opportunity to connect. It is an opportunity to break down barriers and come together as one; it is an opportunity to learn that if we are going to survive, we all need each other.”