The cone of social-media silence at Bill Cosby's trial

The judge's crackdown on pinging phones and illicit apps is a throwback to the Twitter-less age. Have courts gotten lost on the viral landscape? 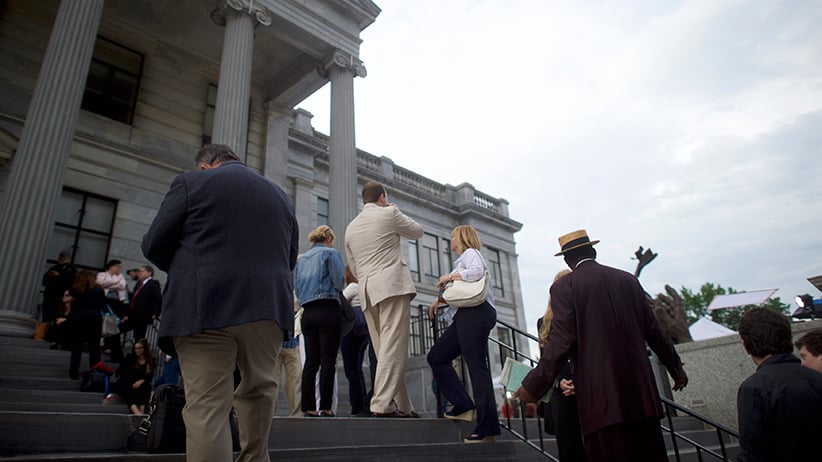 During breaks in proceedings, reporters at the Cosby trial in Norristown, Penn. rush to update their social-media followers (Mark Makela/Getty Images)

If there’s one point of clarity emerging from the Bill Cosby trial, it’s this: addiction to cell phones and social media is so pervasive that even the threat of a contempt of court charge is an insufficient deterrent. That may seem hardly worth mentioning, but has potential implications for the “fair and impartial” trial that Justice Steven O’Neill, of the Montgomery Court Common Pleas, has repeatedly said is his aim.

Court decorum in Pennsylvania dictates that cell phones must be not only be off, but out of sight. There is no transmission from the courtroom—no email, no Google, no texts. It’s a tweet-free zone. Recording is not allowed. Laptops and tablets are allowed—for note-taking purposes only. Court officers patrol the room like a jail guards, checking for any suspicious on-screen apps.

The court supervisor has repeated the instruction every day. Still, phones have gone off. On day two, when the ring tone bleating the Gnarls Barkley song “Crazy” sounded, Judge O’Neill was furious: “Seriously?” he said. “Seriously?”
Still, email programs were clearly on display in the courtroom. On day three, it was announced that someone—a local reporter, as it turned out—had been removed the day earlier for transmitting from the courtroom and had been charged with contempt. O’Neill again gave the court a stern talking to, saying that if the rule was breached, phones would be confiscated, their owners banned from court. Only moments later, a text ping could be heard. Later, the cellphone of high-profile lawyer Gloria Allred, who is representing Kelly Johnson, the first witness, went off and she was escorted out; she was let back in after the next break. Still later, a man, who was not a member of the media, was led out when his cell went off.

The events at the core of the case date to 2004, pre-social media, a time almost impossible to recall. Andrea Constand alleges Bill Cosby drugged and sexually assaulted her in January 2004, a month before Facebook was founded. Twitter launched a few years later. The court was reminded of that pre-social-media reality when the defence combed through phone records, many indicating calls of less than a minute duration, to indicate communication between Constand and Cosby after the alleged assault. Today, we’d have texts, offering far more specific information about the nature of the relationship.

The arrival of social media has altered the cultural mindset in other ways, that could play out in the Cosby case.  The Internet fosters collective “confirmation bias,” the human instinct to have opinions and beliefs reinforced. That’s in overdrive in a case like Cosby’s, where opinions are polarized and plentiful.

Clearly, the courts are still figuring out how to adjust to a viral landscape. There is something almost quaint about Cosby’s defence team’s successful argument that the jury should be pooled from Pittsburgh—due to concern the pool in Montgomery County, Penn., where the case is being heard, had been tainted by pre-trial publicity. That might have been true in the days people relied on local news. But local news is dying, while social media is proliferating, making the notion that, in 2016, a population 400 km away would not have access to the same information about Bill Cosby, and the allegations against him, naive.

The media’s movement to digital platforms has placed increased pressure to be first, to generate clicks, to score the exclusive. This too, can compromise the judicial process, as was evident Wednesday, when Judge O’Neill warned that anyone who tried to try to contact witnesses would be in contempt. He said it had already happened.

Concern that the jury pool, which has been sequestered, will be influenced by outside accounts is a real one. In his opening remarks, the judge warned the jury about consuming any outside information or talking to others, even their fellow jurors, about the trial (doing so would result in them replaced by an alternate). He acknowledged the thirst to connect online—”This is 2017 not 1917”—yet warned there were no exceptions: “You might ask, ‘What about in the privacy of my room? It won’t hurt a little bit if I look on the Internet. What’s the harm?'” He couldn’t take away their devices, or block their TV, he acknowledged, but added with confidence: “I don’t need to. Not with this jury.”

It’s a noble sentiment. Given the behaviour of the gallery in the Bill Cosby trial so far, it’s also far from a guarantee.