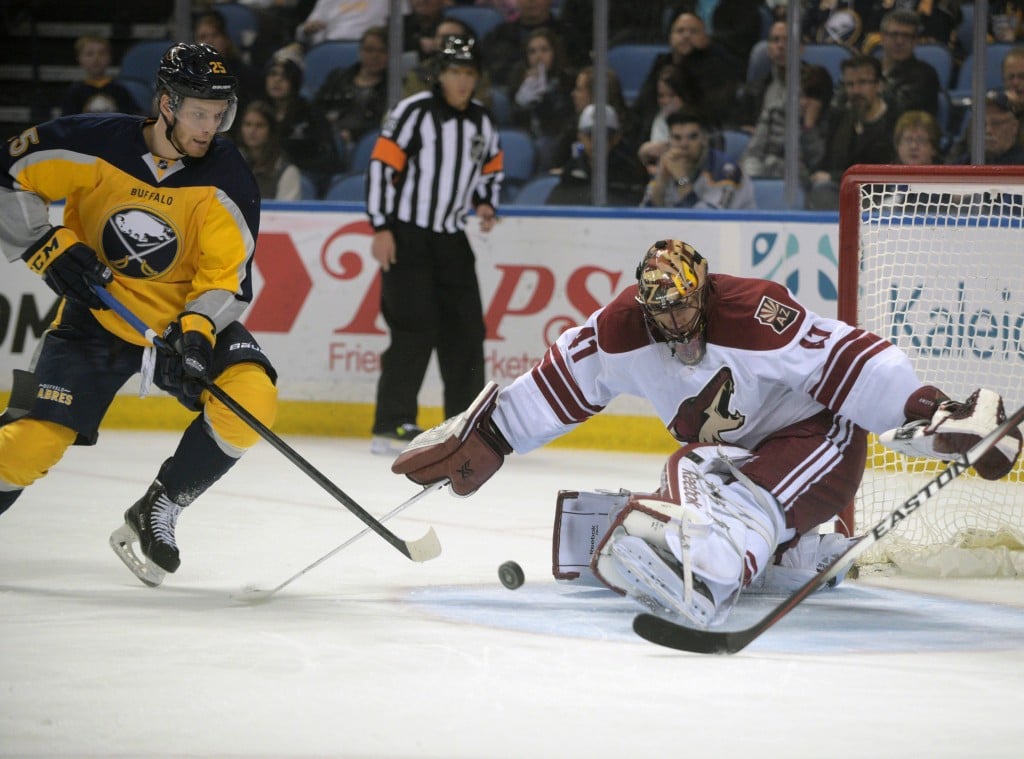 On Monday night at 10 pm EST, Maclean’s will be live-blogging what could be the Worst NHL Game Ever, where a pair of bottom-dwellers, the Buffalo Sabres and Arizona Coyotes, face off hoping to lose, to improve their chances at the first overall pick in the NHL draft. Join our experts tonight as they analyze and lampoon in equal measure the game, the idea of the tank, and more. Here’s some sober rethinking of teams intentionally losing to improve draft position, from Sportsnet’s Jonathan Willis:

On Thursday, the Buffalo Sabres and Arizona Coyotes met in what we might call the first game of the McEichel Cup. The two worst teams in the NHL faced off in Buffalo, each with last place and the accompanying guarantee of drafting either Connor McDavid or Jack Eichel in their sights. The Coyotes won the game in dramatic fashion on an overtime power play.

The result from the stands was a louder cheer than Arizona typically gets from its fans when it scores a goal in a home contest. Seventy-five games into a brutal season, this tilt between the Sabres and Coyotes gave Buffalo fans a rare opportunity to cheer. And cheer they did, but for loss and a chance at a high draft pick rather than for victory.

The two teams meet again on Monday in Arizona. It would be surprising if Coyotes partisans treated the game any differently than fans in Buffalo did. It’s an ugly thing to see a home crowd cheer the visiting team, but it would be wrong to blame Sabres (and likely Coyotes) fans for their enthusiasm. The NHL incentivizes losing with its current draft system, and most of the best teams in the league were built in part with the high draft picks that come with losing and losing badly. Fans have learned the same lesson that managers have: Sometimes it pays to lose.

The league has taken some steps to reduce the temptation to tank for a high pick. The draft lottery was originally instituted with the aim of preventing teams from targeting last place. This past fall, the NHL went further, bringing in an expanded lottery format and reducing the odds of winning for its worst teams. It’s not enough, because the lottery is still weighted in favour of the league’s biggest losers and with nothing else to cheer for late in the year, fans of those clubs will inevitably be reduced to cheering for losses.

There is, however, a way out.

Related: Thank you, Leafs, for sucking

At the 2012 Sloan Sports Analytics Conference, PhD candidate Adam Gold presented a simple solution. Instead of relying on a lottery that actually serves to diminish the value of games late in the season, Gold proposed that draft order should be determined by total points recorded after a club is eliminated from the post-season.

“In a way, the season ends once teams can no longer win a championship, yet fans are still asked to pay a premium to go and see their favourite teams perform,” Gold said. “In an attempt to inspire fans, to maintain interest, passion and optimism in their favourite teams while still giving the worst teams that need the most help the best picks to get the best players, I respectfully propose that draft order should be determined based on how teams perform after becoming mathematically eliminated from playoff contention.”

A bad team would have a longer time period to rack up points, while teams on the playoff bubble might have just one or two games. As an example, Gold revisited the 2010 Draft and found that the Oilers would have won it (as they actually did) because they had 14 games to collect points while no other team had more than eight. In 2011, however, Edmonton would have earned the third-overall pick because in 12 games they only collected as many points as St. Louis managed in just four.

It’s a revolutionary idea, one that eliminates the incentive for a team to tank for a high pick while simultaneously still affording bad teams the best opportunity to land those slots in the draft. The upside to losing would disappear overnight.

That it’s in the best interests of the integrity of the sport should not be in question. However, as lockouts, holdouts and relocation threats have shown over the past few years, the NHL and its players do not necessarily make decisions based on what is best for the sport. Therefore, it is a very good thing that the primary benefit of Gold’s proposal is actually on the business side. In an 82-game season, it’s easy for fans to become disengaged, especially when there’s nothing for their team left to play for. But when the prize for winning games is Connor McDavid or Jack Eichel, there’s every reason for fans to stay engaged, and engaged fans do things like buy outrageously priced tickets to hockey games.

It also puts the focus where the NHL wants it: On the ice. Imagine if a Arizona or Toronto wins the draft lottery in a few weeks, a completely plausible eventuality based on the current lottery structure. How much focus will there be on the league if a team it has fought tooth-and-nail to save, like the Coyotes, wins the first-overall pick? What if a team like Toronto wins the lottery, resulting in McDavid landing in a major market? What if a major-market team with extremely low odds, like the Philadelphia Flyers, wins? Inevitably, the fairness of the lottery will be brought into question. No such complaints could arise out of Gold’s system; it has the benefit of complete transparency. Teams will have clearly earned their respective places in the draft.

If there is a negative, it will be a slower trade deadline, one that sees fewer Torrey-Mitchell-for-a-seventh-round-pick-and-a-fringe-prospect style moves. But in the grand scheme of things, it doesn’t matter if bad teams choose to hold on to role players. Stars will still be traded, because bad teams will still be unable to let them walk for nothing in the summer when a trade for a first-round pick and a decent prospect is on the table. Realistically, those bigger moves are the ones that make fans tune in for the trade deadline, and those moves will still happen.

Moving to Gold’s system is the right thing to do. It will keep the focus squarely on winning games, it will keep fans engaged and it will enrich the league and its players. Very rarely is a proposed rule change such an obvious win for the NHL and its fans.