A whole other stratosphere of canned food

A visionary chef is betting conservas are the next big thing. At $68 a tin, they’d better be. 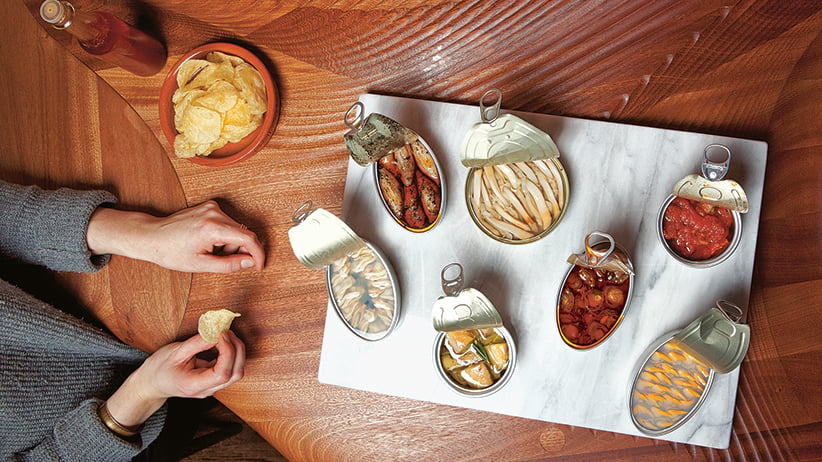 A guy walks into a bar with a hundred-dollar bill and asks for the usual. The bartender sets out a short tumbler of vermouth, a small tin of clams with a side of potato chips and a packet of toothpicks. If this sounds like a joke, then you haven’t been to Grant van Gameren’s new Bar Raval in Toronto. Arguably the city’s hottest chef, the renowned charcuterie king of Bar Isabel fame deadpans: “This could be the trend of 2016 … but it’s going to be difficult.”

“This” is an age-old Spanish snack food called conservas, which Van Gameren and his colleague Mike Tkaczuk of Serrano Imports —the man who brought Serrano ham to the Canadian market over a decade ago—are introducing to Canadian palates. At the heart of the tapas tradition, found mostly along Spain’s coastlines, are tins of seafood such as scallops, razor clams and berberechos (or cockles, a small type of clam) that are preserved in brine, oil or simple sauces and eaten straight out of the tin. And while it’s true that neighbourhood Spanish and Portuguese fishmongers in Canada have long imported commonplace canned seafood such as sardines and mussels, the goods at Bar Raval took months of overseas research to find.

Van Gameren was initially inspired by a trip to Spain, where he came upon bars that serve nothing but preserved foods in jars or cans. The seafood was best eaten with chips, a bit of crusty bread or at most a light vinegar-based garnish. “This idea of eating out of cans? There’s just something cool about it,” he says.

The heritage behind the product is key. “We see anything in a can as industrialized,” says the chef. “But you have to open a can of barbarechos to appreciate how beautifully it has been packed.” By his own admission, he tried it with cockles and failed. “I tried to clean them, steam them and remove them from the shell for packing, and it was one of the hardest things I’ve done in the kitchen. And I couldn’t get it right.”

Now van Gameren is hooked on mastering the art of conservas. While the menu at Bar Raval includes cured meats and other tapas, the focus is on a combination of in-house and imported tinned seafood. The in-house stuff costs a fraction of the price—individual tins from Spain range from $18 to $68, while the local ones compare at $8 to $14. The opening menu includes Raval’s own canned mussels from Saltspring Island, smoked mackerel with rosemary oil, sardines and anchovies brought in fresh from Italy and then preserved in-house. “The idea is to try ours for $14, and if they really enjoyed it, they might want to spend $39 on the stuff from Spain,” van Gameren explains. “Ours is good, but theirs is stunning.”

Not all conservas from Spain are equal. Van Gameren learned about poor practices that yield contents flecked with sand or stones and provenance that is more global than local. “Some people are lazy and cut corners and sell for a cheaper price,” van Gameren says. He and Tkaczuk settled on the supplier Conservas de Cambados, whose goods are hand-packed, locally sourced along the Galician coast and harvested using traditional methods. “They’re only fishing these certain types of fish or seafood in certain areas at certain times of year. They’re keeping in mind sustainability for future generations,” Tkaczuk says.

Tkaczuk appreciates the challenges brought on by introducing a new, pricey product. After all, he also introduced us to the platinum-priced Ibireco de Bellota—ham from a rare-breed pig that stuffs itself with acorns—that retails for $30 per 100 grams. He estimates it will take a few years for broad acceptance, especially given their brand of conservas are 10 to 20 times the price of tinned seafood currently in grocery chains.

Tkaczuk hopes to see conservas across Canada one day. Online Spanish-foods retailer Lola and Miguel is on board and Calgary tapas restaurant the Ox and Angela will soon join the club. Tkaczuk reports inquiries from chefs in Montreal, Vancouver and Calgary. “When it comes to the introduction of unique and pricey ingredients, very few chefs want to break the ice,” he says. “But I can guarantee that by spring, conservas will be on more menus.”