‘Like many university students, I had an obsession with weight and food. Today, as a physician, I can see my favourite foods were like drugs.’ 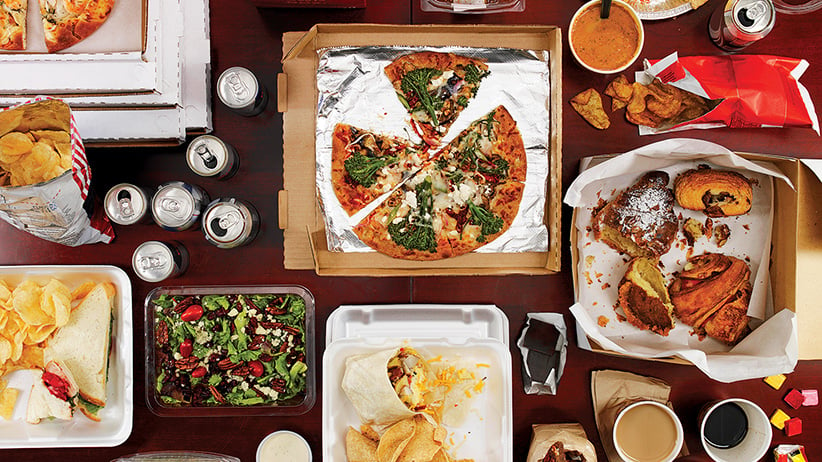 Late one night in 1979, I was exhausted and agitated, awake for 16 hours. Should I write my term paper, go out for a run or recalculate my daily allotment of calories to see if I can afford just one more slab of chocolate? I felt as if there was a creature inside me, breathing heavily, getting bigger and more menacing. It wants to eat ferociously but if I give it food, even the smallest bit, it will want to eat everything in sight. It doesn’t care if I’m full or if I plead with it to stop. How will I ever make it through the night? At 23, I was experiencing something I shared in common with 25 per cent of the female population at Canadian universities—an obsession with weight and food. If I had seen a doctor at that time, I would have been diagnosed with an eating disorder, probably bulimia.

Eventually I discovered a way to quell the beast. It came only after trying many strategies, creating rules such as eating junk food only on Saturdays or eating only low-fat, low-calorie items or eating only in the company of others. I tried drugging my cravings with alcohol, working nonstop until the cravings passed. Mostly, though, I just gave in. The only effective solution was also the last thing I wanted to do. Stop eating my favourite foods: donuts, croissants, ice cream . . .

Again and again I tried but I failed. After each failure I’d again try the “common sense” approach of eating properly but my eating habits always slipped back into obsessive unmanageability. If I tried to eat just one smallish dessert each night, it might last one night, or three weeks of white-knuckling, but eventually I gave in to the same old pattern of voracious eating: a slightly bigger dessert followed by two desserts a day followed by desserts replacing nutritious meals.

Today, decades later and a practising addiction counsellor and physician, I can look back and see that my favourite foods were like drugs. If I didn’t eat the first cookie, I didn’t want a second, then a third, then more. Like an alcoholic who must give up alcohol for life, I had to give up my trigger foods.

I describe myself as an addict. A respectable addict, of course. Not like the desperate souls who cash in their mortgages or the last of their retirement savings to get their fix. After all, my drug of choice is the cheapest one of all and therefore the most pernicious. And my drug is easily available everywhere: in the gas station’s convenience store and in supermarkets; in a modest diner and in an exclusive restaurant. My friends, family members and colleagues are all users. In fact, many people I know abuse food in some way although if I suggested it, they would say, “What, me an addict? No way!”

In those voices I hear my own years of rationalizations: we all need to eat food; I just require better discipline; I have had a bad day and deserve a treat. My “common sense” thinking that food cannot be an addiction repeatedly led me to yet another relapse, with its secret binging and hoarding.

Even at the best of times, when things were going well in my life, I was continually distracted by the thought of food. At lunch, while a friend excitedly told me about her promotion at work, I silently counted the calories of the cheesecake I had just eaten. I continually forgot, or put off, the resolution made the day before to never to eat this way again. Whenever I would tell myself this is normal behaviour, it was the addict in me talking. In my heart, I knew I was laying the groundwork for the next binge.

All this finally ended a decade ago, when I gave up sugar. Today, whenever I tell myself that I can share one small dessert with a dinner companion, I think, “Who am I kidding?”

Enjoying food is not the same as being addicted to food. Our brains are wired to enjoy food; it’s a primal survival mechanism. We all enjoy foods that are high in both fat and sugar because they’re energy-dense, at one time ensuring our survival when famines were commonplace.

Disordered eating occurs when the natural ebbs and flows associated with the pleasure of eating are scrambled. When you’re very hungry, even a plate of broccoli is extremely enjoyable. Your taste for food diminishes when it is no longer necessary to “fuel up.” If you continue to want food when you’re not hungry, something is wrong.

David Kessler’s book, The End of Overeating, and Pulitzer prize-winning investigative reporter Michael Moss’s Salt, Sugar, Fat: How the Food Giants Hooked Us, argue that it’s the food industry that has deliberately hijacked this universal biological imperative, engineering our food to target the primal part of our psyche that few of us can resist. As Moss writes: “Some of the largest companies are now using brain scans to study how we react neurologically to certain foods, especially to sugar. They’ve discovered that the brain lights up for sugar the same way it does for cocaine.”

To understand how cocaine addiction and food intersect, we must first understand how hunger works. As our stomach empties, a hunger hormone, ghrelin, is released and tells our brain we are hungry. Have you ever noticed that once you’ve decided to eat you realize you have a voracious appetite? This is the work of insulin, another key hunger hormone. Often you have to restrain yourself from picking at the food before you even get to the table.

When we start to eat, insulin levels spike, creating a drive to ensure that we eat the sugar the insulin is designed to transport. As we eat, the curve of pleasure begins to dip; when we are full, we no longer desire food. This curbing of our appetite is also the work of our hunger hormones, linked to our endocrine and digestion system. Once our stomach is full of food, our fat cells release leptin, a hormone that regulates metabolism and body weight, and which tells us we no longer need to eat. Leptin dampens the potency of the insulin-fuelled dopamine spike that gives us the pleasure of eating. Even though the food may still be pleasurable in theory, without the reward urging us on, we should lose interest in it.

But modern society conspires against this perfect feedback loop. When there are many food choices—those “all you can eat” restaurant specials, for example, the tables groaning with plates of steaming noodles, roasted meats, candied vegetables and many varieties of sweets—our dopamine rockets, overpowering the leptin intended to halt our eating.

But I believe there is something more fundamental than external pressures at work here. The drive to overeat suggests a common dynamic underlying our eating behaviour. For the most part, we have not been calling it an addiction. After all, not everyone unable to resist the lure of hyper-palatable foods is a food addict.

What makes eating addictive? The degree to which a person is compelled, even obsessed, to eat. Some are merely tempted, giving in occasionally: willpower works for them. Others, more susceptible to the seduction of food, feel rapture at the sight of a buffet, filling plate after plate of food even after they’ve stopped enjoying it.

As humans, we all sit somewhere on a continuum, with desire at one end and addiction at the other. Some of us eat for healthy reasons—for nutrition, as part of social interaction and, yes, for pleasure. Others eat because they are driven by a need that is beyond willpower or common sense. It becomes a need disconnected from nutrition, interaction or even pleasure. When an eating behaviour leads to a self-destructive end point, when there is a desire to eat that has no “stop” switch, you’ve crossed over into the dynamic of addiction. A growing number of people fit into this category.

In the spring of 2013, my struggle with food was back. Did I really think it had gone away forever? When I looked at the tablespoon of almond butter I felt a surge of warmth and excitement. After the third tablespoon, I knew I was in trouble. The next day, I stared morosely at the jar but still ate three more heaping tablespoons. Why not savour just one more spoonful? I thought.

The next day I barely restrained myself from eating five towering tablespoons. That old, bottomless hunger had resurrected itself. By the end of that month, I was eating more than 10 mammoth tablespoons every night.

Soon the bathroom scale became a terror. After noticing a few extra pounds, I promised myself I would stop once I gained five pounds. Then 10 pounds. To stop eating this trigger food that trapped me in a web of craving and despair didn’t seem possible. It took a year, but I finally took the only action I knew would work: place nut butters in the same category as foods like sugar, bread, chips and pasta, all of which I had given up years earlier. Abstinence was the only solution and once I stopped, the desire gradually faded. I had quelled the craving inside me, but not the disease that had caught me off-guard once again.

I know what you must be thinking. How can a physician and counsellor specializing in food addictions, succumb to this addiction? Based on my personal and clinical experience, I believe that no addiction can be cured, only controlled. As knowledgeable as I am about the issue, I still sometimes naively ask myself: Will my desire to compulsively eat trigger foods always be there? Can I really be addicted to food like a drug addict is to a drug?

But I tell myself, the evidence has shown me, time and again, even to this day, that I will always be a food addict. I need only look to others who have strayed from their diet, even a tiny nibble, and before long, find themselves back to eating uncontrollably. There are many of us out there.

Adapted from Food Junkies: The Truth About Food Addiction. Published by Dundurn Press (2015). Dr. Tarman is an addiction medicine specialist focusing on food addictions. She is the medical director at Renascent, a drug and alcohol treatment centre in Toronto.