After much negativity, Toronto embraces its Games

If you're grousing about the Pan Am Games, you're missing out. The pleasure of these Games is that they know what they are 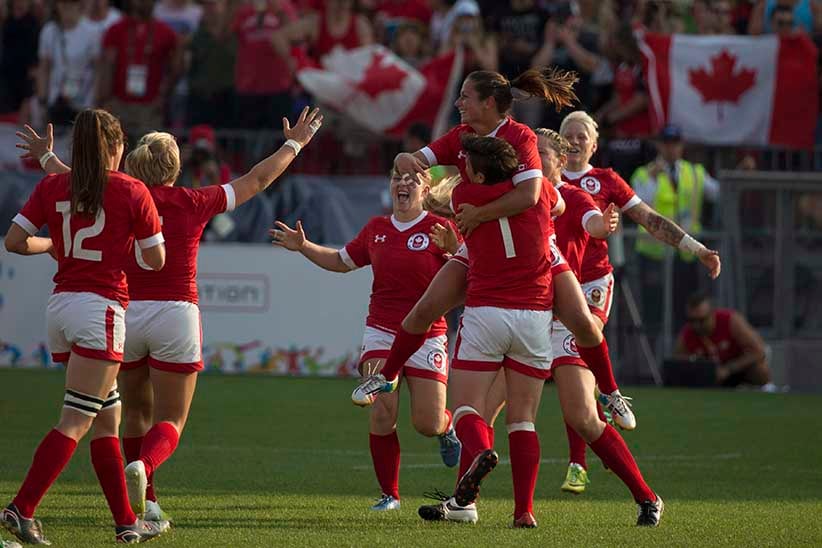 The DJ declared victory, with more than seven minutes still remaining in the women’s rugby sevens gold medal match. Ashley Steacy had just rumbled across the line for her second try of the evening, and then kicked a convert to give Canada a 40-7 lead over the United States, when the speakers at Toronto’s Exhibition Stadium started blaring Taking Care of Business. A pointed, CanCon celebration that really left the DJ and the well-beered crowd of 18,000 only one place to go as the final seconds ticked down on what turned into a 55-7 rout. So it was that Tegan and Sara’s Everything is Awesome, from The Lego Movie, became the soundtrack to the hugs, high-fives and dancing both on the field and in the stands, part of an extraordinary 16 medal-day, including six golds, for Canada at the 2015 Pan Am Games.

“It’s a dream come true,” Jen Kish, the team captain, said after leading a flag-waving victory lap of the pitch, her mouth-guard still casually tucked behind her right ear. “As an athlete you want to play in big stadiums like this. You want the support of the Canadian crowd. And that’s exactly what we got.”

The country’s biggest city had approached these Games with more of a sense of dread than anticipation. For months, citizens had been warned to plan for traffic chaos and take transit to work—or better yet, book the two weeks off and flee to the cottage. News coverage had focused on the $2.5-billion cost to taxpayers, including almost $400,000 for Pachi, the official Pan Am mascot, a porcupine with 41 multi-coloured quills, one for each participating nation. Lately, most of the stories had been about the hundreds of thousands of unsold tickets. “In an indifferent Toronto, the Pan Am Games land with a thud,” was the headline in the New York Times last week. 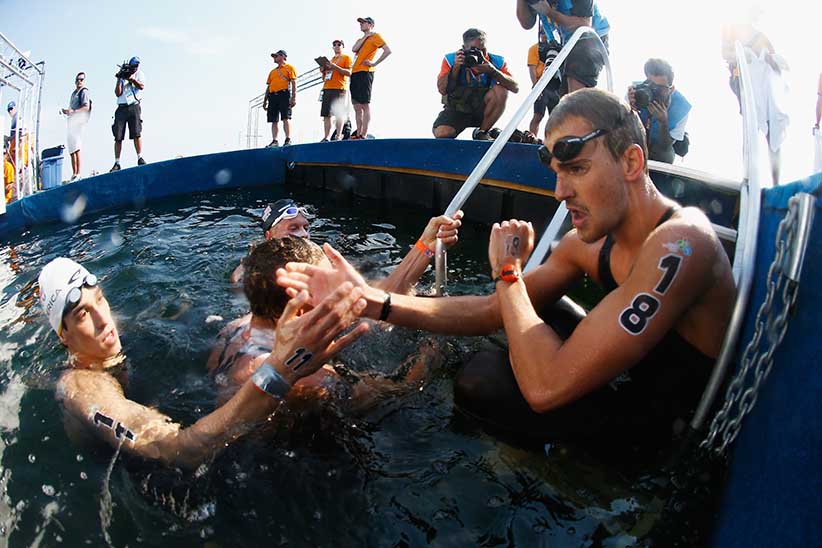 But something changed as the Games officially kicked off on July 10. The Cirque du Soleil-designed opening ceremony, held before a sellout crowd of 45,000 inside the Rogers Centre, proved to be a lot of fun. Native dancers tranced out to hip-hop beats, acrobats tumbled over lines of fire, and people floated around in bubbles, high above the floor. The Pan Am torch arrived courtesy of the men’s 4 x 100-m relay team that won Olympic gold back in 1996 in Atlanta, with the final hand-off between Bruny Surin and Donovan Bailey taking place on the Edge Walk halfway up the CN Tower. A Bailey stunt double then parachuted down to the roof of the dome, setting up a sequence where the actual sprinter was lowered from the rafters with flame in hand. There was no Nickelback, Barenaked Ladies, or Glass Tiger. And somehow the cauldron got lit without the help of Wayne Gretzky and a pickup truck.

Related: Donovan Bailey on the Pan Am Games

On the first full day of competition, organizers sold 20,000 walk-up tickets, and while the crowds were scant for events like tennis and soccer, there were surprising sellouts for synchronized swimming and roller figure skating. “I saw that people were sitting down an hour before we were scheduled to start and I was shocked,” said Courtney Donovan, the U.S. entry in the clunkily graceful, eight-woman roller competition. “It was like, oh my God!” Donovan said she was used to jumping and spinning before 25 people at local events, or maybe 100 at the nationals or world championships, but had never performed before anything like the crowd of 2,000 who showed up in Toronto. Kailah Macri, a 25-year-old from Whitby, Ont., who came out of retirement to once again lace up for the Pan Am Games, struggled to process the applause and adulation. “It felt amazing,” she said. “Honestly, it was the first time I’ve ever had everyone out there cheering for me.” All the support wasn’t quite enough to lift her to the podium. Two missed jumps saw Macri finish fourth, with a score of 470.8, nine points out of the medals. If the opening weekend was only a blip, and Torontonians do fail to embrace the Games, it will be their loss. The Pan Ams aren’t the Olympics, but that’s a large part of their charm. There’s none of the overbearing security, or entitled VIP culture. (Empty stands are a routine Olympic problem too, as guests of corporate sponsors fail to show up for the less glamourous sports.) And for once, people in the Big Smoke are in a good mood. 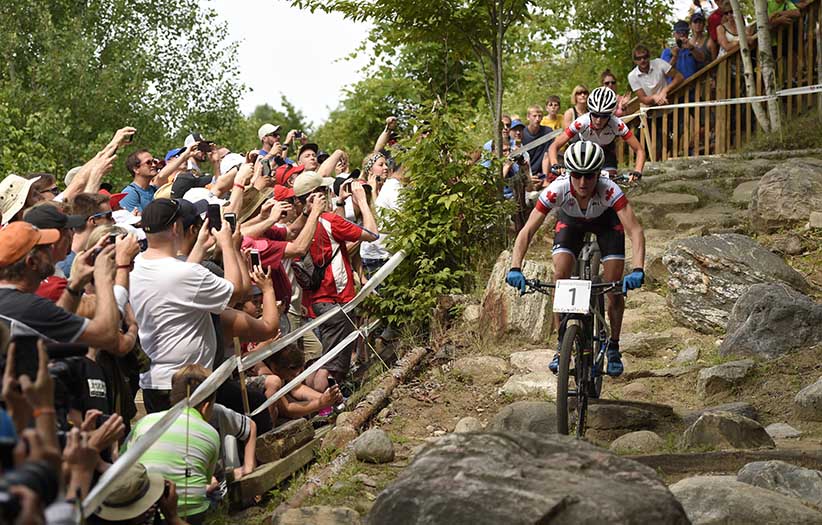 The Pan Ams feel both intimate and accessible. At rugby, the women’s teams mixed with friends and family on the stadium concourse, and stopped to pose for pictures with fans after every game. Magali Harvey, a pint-sized Canadian speedster, and the 2014 International Rugby Board women’s player of the year, said that she was excited that her parents, who live in Quebec City, finally had the opportunity to watch her represent her country. “This is the first time they get to see me on the field—not a TV or a computer.” At the men’s 10-km open water swim, Canada’s Richard Weinberger, a bronze-medal winner in London, shook hands and chatted with fans as he made his way to the start line. Almost two hours later, after leading for much of the race, he finished fourth, one-10th of a second off the podium. The other Canadian competitor, Eric Hedlin, finished ninth, almost six minutes later, with his mother keeping pace along the shore of Lake Ontario, shouting encouragement.

Canada’s massive 719-athlete team boasts plenty of proven Olympians and up-and-comers who may well end up competing next summer in Rio, or five years from now in Tokyo. For many others, the Pan Ams will be the pinnacle of their sporting careers. The Americas-only fields aren’t nearly as deep as at world championships or the Summer Games, but winning a medal is still a major accomplishment, and not at all discounted by the competitors. Canadian triathlete Paula Findlay won five times on the world circuit in 2010 and 2011. Then she fell victim to a series of injuries that saw her limp to a last-place finish at the London Olympics, and struggle ever since to regain her form. Suffering from a summer cold, she ended up in ninth place in Toronto, two minutes and 36 seconds behind the winner, Barbara Riveros of Chile. “It’s really disappointing,” Findlay told reporters. “I came here to win. I won’t lie.” A few minutes later, as she made her way back to the changing area, a group of orange-shirted Pan Am volunteers stood and applauded her effort, chanting her name. Findlay smiled weakly and lifted her arms. For someone who is used to earning her accolades, it looked like the worst moment of her day.

Related: Canadian gold, but not for Paula Findlay

The Pan Ams have proven kinder to others, serving as a dress-rehearsal for Rio dreams. Emily Batty and Catharine Pendrel took gold and silver in women’s mountain biking. “I get chills just thinking about it,” Batty said afterwards. “The whole course was lined with thousands of people. It was such an amazing vibe and energy.” Pendrel was the world champion heading into the 2012 Olympics, but finished a heartbreaking ninth at London. It took her two years to rebuild her confidence. Now again the defending world champ, she sees the Pan Am silver as an important step toward her ultimate Olympic goal. “We don’t just want to be the best in this race; we want to be the best in the world,” she said. 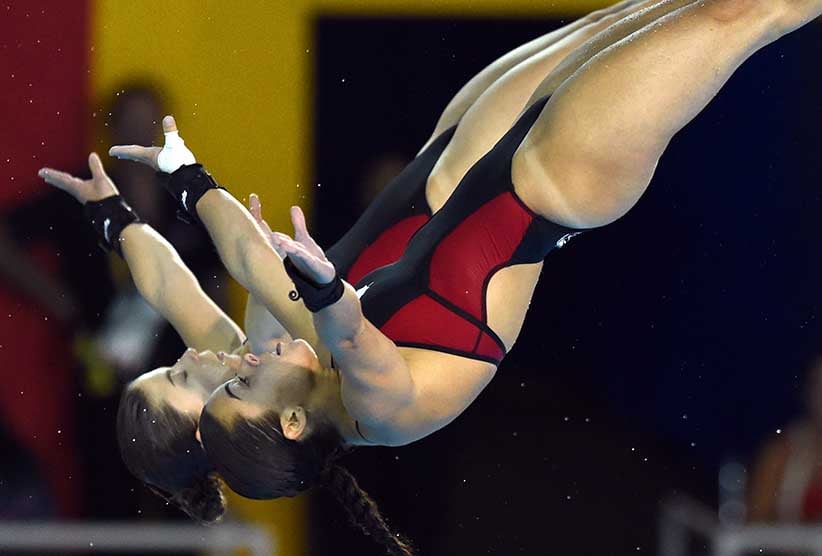 Canada is aiming for a top-two finish at these home Games—somewhere around 190 medals—and was well on pace, with 53 by Day 4 (of 16). But the Canadian Olympic Committee has been clear about what it sees as the real value proposition in hosting a big, B-level event. The last two Olympics in Canada were Winter Games, held out west. “We needed to do something in the east,” Marcel Aubut, the head of the Canadian Olympic Committee, explained. “We needed something that would justify some major investment in infrastructure.” Ten new athletic facilities have been built in southern Ontario, including a velodrome in Milton and new Olympic-sized pools in Markham and Scarborough, and 15 other existing sites have been upgraded. Aubut was busy showing them off to IOC president Thomas Bach over the first days of the Games, and talking up a possible Toronto bid for the 2024 Summer Olympics.

At the pool there’s no Michael Phelps or Ryan Lochte. Usain Bolt and Tyson Gay won’t be at the track—although Canadian sensation Andre De Grasse, who has been running just as fast, will compete. The Pan Ams were opened by Governor General David Johnson, rather than the Queen. Kate and Will and Harry were the “official ambassadors” for London. Toronto has actor Jason Priestley. I sat beside him for awhile at rugby. He sang O Canada with tuneless vigour, and accidentally knocked over his beer while cheering a try. He’s a perfect fit.

The Pan Ams know what they are. It’s not the big, big time, but it’s real. And for the athletes, it has deep meaning. Kayaker Emilie Fournel, who along with Michelle Russell, KC Fraser and Hannah Vaughan, won Canada’s ﬁrst medal of the Games—a gold in the K4-500-m—joked about how nice it is to be part of a large community of women who have trouble finding T-shirts that fit their muscular shoulders and arms. But she teared up when she told the story of how a little boy shyly approached her, as she walked across the venue parking lot wearing her medal, to say it was “the best thing” he had ever seen in his life. “Crossing the line and winning was very special,” Fournel said. “Seeing all those people out there for us, it was even better.”