Anne Kingston: Women like Michelle Williams have stepped up for networks and studios beset by sexual harassment scandals. Their reward? Absurdly unequal pay. 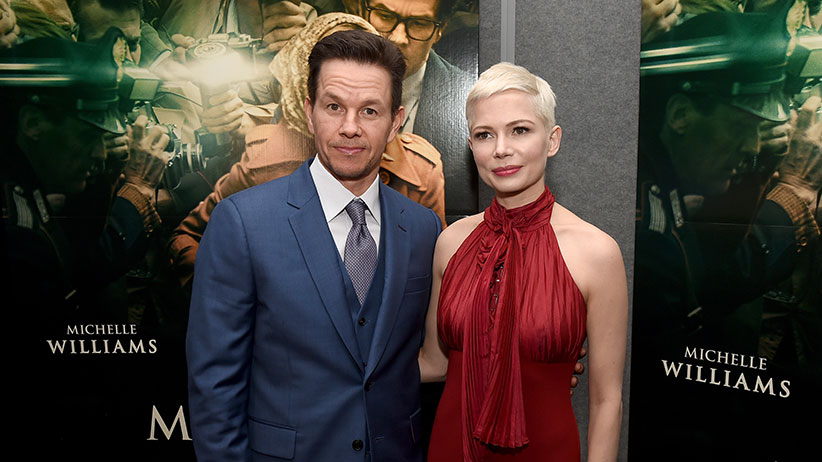 Mark Wahlberg (L) and Michelle Williams attend the premiere of Sony Pictures Entertainment’s “All The Money In The World” in Beverly Hills, Calif. (Kevin Winter/Getty Images)

Update: Mark Wahlberg and his agency William Morris Endeavor have donated a combined $2 million in Michelle Williams’ name to the Time’s Up legal defence fund.

A very rich man once told me: “If you don’t ask, you don’t get.” I thought of him—and his confident, tough-guy adage—when news broke, and outrage mounted, over Mark Wahlberg being paid 150 times more than Michelle Williams for reshoots of All the Money in the World; the additional work was required because Kevin Spacey was dropped from the film (and replaced by Christopher Plummer) after being accused of unwanted sexual touching by several men. Because he asked, Wahlberg netted $1.5 million. Williams’ people didn’t ask for more, and she received a standard per diem totalling less than $1,000. It wasn’t the first revelation of sexual-harassment-induced wage inequality. Hoda Kotb, who replaced a disgraced Matt Lauer as a Today Show co-anchor, is being paid $18 million less than her predecessor who took home $25 million annually.

That the post-Harvey Weinstein “reckoning” has morphed into an “accounting” of gendered wage inequality in Hollywood was inevitable. Reports of rampant sexual harassment in the entertainment industry laid bare power dynamics in which women and men can be exploited; that women are paid less than men (with women of colour even lower on the pay scale) provides literal proof that they’re less valued. The two are tethered, of course: money confers power (and vice-versa), hence, the decades’-long wilful blindness to reports of sexualized abuse by profit centres Weinstein, Bill Cosby et al. Post-Weinstein, we’re watching it work both ways, with women leveraging their box-office clout to speak out, and even to successfully banish men accused of harassment and assault. That we saw when Gal Gadot refused to appear in the Wonder Woman sequel unless producer Brett Ratner was removed from the project.

RELATED: What we know—and have always known—about this moment in sexual harassment

Of course, it’s difficult to see injustice or mistreatment when salaries of millions of dollars are involved. But the excuses marshalled to justify seven-figure pay gaps inside the entertainment industry are the same as those used to justify four-figure pay gaps outside of it. For instance, Wahlberg, or his “people,” were painted as the shrewder negotiators; they demanded extra money for the reshoots; Williams’ agent didn’t. In other words, “he asked” so “he got.” (That both actors are represented by the same agency,  William Morris Endeavor, raises more questions and adds a layer of irony.) We heard similar arguments vis-a-vis Kotb—that Lauer must have been the better negotiator, that he’d worked at the network longer, that he’d started at a higher salary, that network morning shows can no longer afford mega-high salaries, and so on. But Kotb is doing the exact same job; arguably, she’s under additional pressure to regain credibility and boost the ratings of a program damaged by allegations of Lauer’s behaviour. The wage gap in Williams’s case is, in retrospect, more egregious: she was the movie’s central character; her performance has received more critical acclaim; she received a Golden Globe nomination, further publicizing the movie, while Wahlberg—currently the highest paid male actor—did not.

The Williams example also illustrates how women tend to be socialized to be accommodating—to not rock the boat, to not make a fuss, to not discuss money, to think in terms of helping the team—which in turn works in employers’ favour. Williams previously told USA Today that she was so committed to the film, she’d do any extra work for free: “I said I’d be wherever they needed me, whenever they needed me. And they could have my salary, they could have my holiday, whatever they wanted. Because I appreciated so much that they were making this massive effort.” Asked in a recent ambush interview about the vast wage disparity with Lauer, Kotb answered: “I never talk money. It’s not polite.”

The furor over the All the Money in the World reshoot (what the actors were paid for their original work on the movie hasn’t been revealed) also points out the flaws in the “you ask, you get” model: you won’t “ask,” and therefore can’t “get,” if you don’t “know.” Without transparency, there’s no way to identify unequal treatment or to negotiate parity. That’s why the 2014 hack of confidential communications at Sony Pictures was such a signal moment. Its revelations included the fact that Jennifer Lawrence and Amy Adams received a lower percentage of American Hustle back-end profits than their male co-stars Bradley Cooper, Christian Bale and Jeremy Renner. The news prompted Lawrence, then the highest-paid female actor in the world, to write an angry essay, “Why Do I Make Less Than My Male Co-Stars?”  In it, she acknowledged her desire to “be liked” prevented her from arguing for a higher profit cut—at least, she said, “until I saw the payroll on the Internet and realized every man I was working with definitely didn’t worry about being ‘difficult’ or ‘spoiled’.” The Sony hack also revealed Charlize Theron was being paid $10 million less than her male co-star in a movie in production; that gave Theron the ammunition she needed to ask for pay parity. The studio didn’t put up a fight, Theron later said in an interview: “And maybe that’s the message—that we just need to put our foot down.”

Post “reckoning,” that’s happening. This month, long-time E! News host Catt Sadler quit after learning her male co-host, Jason Kennedy, was paid close to double what she made. “How can I operate with integrity and stay on at E! if they’re not willing to pay me the same as him?” Sadler wrote on her website. “Or at least come close? How can I accept an offer that shows they do not value my contributions and paralleled dedication all these years?” At the Golden Globes, an event focused on “Time’s Up Now,” Debra Messing denounced E!’s treatment of Sadler to an E! reporter. An E! executive responded with the “different roles” and therefore “different salaries” rationale which highlighted the divide in terms of exposure: “Catt was focused on daytime. Jason Kennedy is on primetime evening news, plus red carpet.”

RELATED: A crash course in how the feds could improve gender equality

Protest is happening beyond Hollywood, seen this week when Carrie Gracie, BBC China’s editor stepped down in protest from the bureau (though not the BBC News Service) after a public list of BBC salaries revealed male international editors were paid more than 50 per cent more than women in the same job.  She couldn’t “collude in pay discrimination,” Gracie said, accusing the public broadcaster of “breaking equity laws.”

Gracie has received overwhelming support. But the onus can’t be on women to expose and right this economic injustice. This month, Iceland became the first country in the world to legally enshrine equal pay for equal work. Steps have been taken in Ontario. At the federal level, the country’s first self-proclaimed “feminist” government has yet to table promised legislation on this bedrock feminist issue, which is both surprising and unacceptable. Rich men can take comfort in the the “you don’t ask, you don’t get” mantra. As the growing call for an “accounting” inspired by the “reckoning” makes clear, that’s a privilege most women don’t have.