Against the grain: The resurgence of Canadian whisky 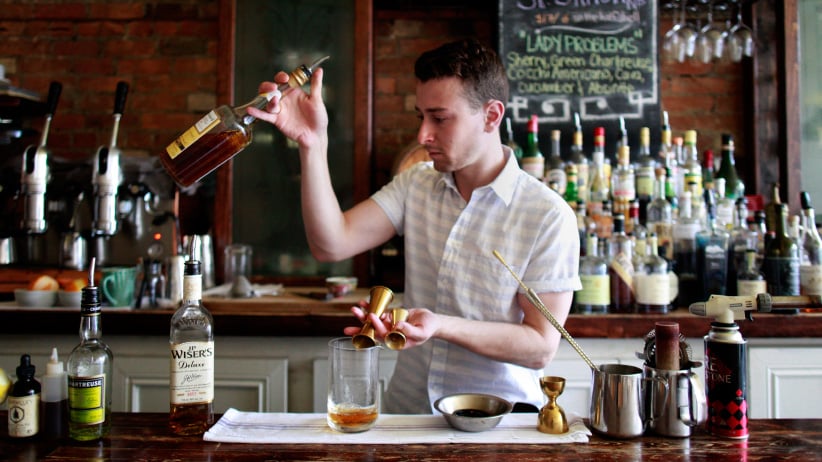 For too many people, the perception of Canada is of a milquetoast nation of polite and somewhat bland citizens. Just look to the government’s lukewarm Canada 150 festivities, or the “meanwhile in Canada” memes on social media, highlighting scenes of Canadian life and passing them off as quaint quirk.

Unfortunately, that trope has long applied all too easily to our whisky, as well. While modern Canada was, in a way, built by whisky—Canadian distillers have been working at it for about a century before Confederation, an act that some historians note was actually underwritten by the country’s whisky barons, who were the biggest taxpayers in Canada during the country’s fledgling years—the market has been flooded by mild, watery Canadian blends for pretty much the entire 20th century. That led many consumers and spirits writers—both at home and abroad—to write the category off as fodder to be washed out by ginger ale, as opposed to being enjoyed as a sipper, and earned it a nickname to refer to its lack of character: “brown vodka.” That wasn’t based in prejudice; it was an accurate assessment of some blends that were deliberately on the insipid side, a profile that was actually desirable during a time when a mixed drink usually meant adding cola or ginger ale.

But tastes change. Cocktails began showcasing the spirit as the hero, and consumers switched to pungent single malts that reeked of smoke; sweet, dark, bourbons that absorbed all the char out of their barrels; and spicy, high-proof rye whisky, all of which challenged the palate, in keeping with this brave new age of adventurous eating and drinking. For a while, it looked as if Canadian whisky—which as recently as 2010 actually outsold American whiskey in the U.S., no less—was being left behind; it became overshadowed by bourbon mania in the United States, a market it needs to maintain, since that’s where about 70 per cent of all Canadian whisky is sold.

Fortunately, a few Canadian distillers were laying the foundation for a comeback in the early aughts. And with a slew of new products winning international awards—including the stunning upset of Crown Royal’s Northern Harvest rye as the top pick for “Whisky of the Year” by reviewing legend Jim Murray in 2015—we’re beginning to see the fruits of that labour now.

That comes on the strength of early moves from three outliers in the whisky business in Canada: Crown Royal, Hiram Walker (Corby’s) and Forty Creek. Almost lost to history now are Crown’s rare releases of a little over a decade ago, including the nearly mythical Cask 16—which came in a super-luxe velvet bag, a serious upgrade from the purple and gold ones that store the cottage crokinole chips—that helped a few people, especially Americans, understand the potential versatility of Canadian whisky. At about the same time, Forty Creek’s founder, John Hall, was starting to perfect his revival of the three-grain blending process that is an important part of our nation’s distilling heritage and makes us distinct from the United States—we tend to distill grains separately and blend, whereas Americans tend to mash different grains together, ferment and then distill as a batch. And at the same time, Don Livermore, Corby’s master blender who is an actual doctor in whisky—he has a degree in microbiology and a PhD in Brewing and Distilling, earning him his moniker “Dr. Don”—was working on a dissertation that would change the way Hiram Walker—and others—looked at wood.

“This PhD really launched what we’ve done here at Hiram Walker, to a lot of brands that have been very successful,” says Livermore, who adds that several of the whiskies that stemmed from his research—Red Letter, Small Batch, Lot 40 and Gooderham & Worts—are all award-winning releases. “I don’t know if you want to call it a renaissance or what the appropriate word might be, but it was about playing and being creative and adapting to consumer needs. And I think what we’ve done and what we continue to launch in terms of whiskies and rare releases is we’re finally starting to catch up in Canadian whisky.”

This storm of innovation reflects the current trends in alcohol—that is, a desire for a deeper, bolder, more complex drink. But that gives Canadian whisky a leg up: Due to the industry’s notoriously flexible regulations, distillers can get creative and produce unique offerings in a way that Scotch, bourbon, and other rules-heavy liquor might not be able to, making it easy to transform Canadian whisky from a mild, smooth, thin-bodied liquor with light vanilla flavours to a bold, spicy-sweet caramel bomb with a rich, creamy body. “Canada’s the perfect place to adapt to those people’s ever-changing taste, since the regulations were set up to give us the adaptability to make what consumers are looking for,” says Livermore.

Canada was actually the first country in the world to mandate minimum aging requirements in 1890—that the alcohol had to sit for a minimum of two years in wood, at first—it backed off over-regulating the industry after that. Some of the regulations sound vague, such as how it must “possess the aroma, taste and character generally attributed to Canadian whisky.” Others, like the freedom to add a splash (up to 9.09 per cent of the volume) of other non-whisky distillates, are downright controversial in some circles.

But Livermore says this is reflective of the essence of Canadian whisky, which is supposed to be a complex blend—more like a cognac than a bourbon. “You come down here and I’ll pull out everything that I make and I can coordinate to make a blend. And it’s awesome. I call it a painter’s palette.”

There’s perhaps no greater sign that the liquor industry at large is gambling on a Canadian whisky ascendance than Sazerac, one of the pre-eminent names in American whiskey, deciding to invest heavily into the renovation of a Montreal blending facility into a distillery outfitted with state-of-the-art stills, which should be producing spirits by early fall. Although Sazerac has been active in Canada for some time, it’s better known for its famous rye whiskey and its ownership of Buffalo Trace distillery, which produces several famous bourbons, including George T. Stagg and Pappy Van Winkle. “We’re a bit ahead of the curve,” says Drew Mayville, master blender of Sazerac’s Canadian division, of the Montreal facility. “We’ve been after this for several years and we’ve got quite a few other things planned, a few of which should be along the lines of our Caribou Crossing, Canada’s first single-barrel whisky.”

That’s a major clue for what Sazerac has in store for Canada. Introduced in 2010, Caribou Crossing’s other claim to fame was its ornate bottle and maple leaf stopper, a design that recalls Blanton’s bourbon, a lovely expression that comes in a similarly short bottle with collectible racehorse stoppers. It’s not accidental: Blanton’s was a big part of the backstory of the premiumization of bourbon, since it was a hit in Japan’s bottle club bars, where businessmen store their own whisky bottles in lockers. In whisky circles, owning the most impressive-looking whisky bottle in the room—and yes, packaging is part of the deal—still remains a matter of status.

Mayville can see the parallels between Canadian whisky and the bourbon boom in America and sees premiumization as an important next move in Sazerac’s plan for Canadian whisky. Bourbon is one of the great success stories of the liquor market; just 15 years ago, it was dismissed as far inferior to Scotch. But that’s all changed, on the strength of its iconic old-man-drink appeal, bold flavours, and its moderate prices. Four years ago, whisky expert Murray proclaimed that bourbon had overtaken Scotch in quality. Releases of certain rare expressions spark desperate bottle hunts, bidding wars, counterfeit bottles and even whiskey heists. And, after it went from a rail drink to a premium one, it has experienced wild growth in both market share and sales, breaking the US $3 billion mark in 2016—the result of several years of nearly eight per cent growth in sales.

Although Canadian whisky is still a long way from bourbon’s ascendence, both Livermore and Davin de Kergommeaux, author of Canadian Whisky: The Portable Expert, have seen an uptick in activity around their social media accounts. People are tweeting about their finds, including vintage bottles and new, rare, limited releases, such as J.P. Wiser’s Union 52 and Livermore’s award-winning and quick-selling Dissertation. Part of the reason for that is price: It’s a rare award-winning one-off that recently won World’s Best Blended Limited Release at the 2017 World Whiskies Awards that retails for $64.95 in Ontario.

“Canadian whisky is a real, genuine bargain, not because it’s inexpensive, but because it’s good value for money,” says de Kergommeaux. “If you want to buy a scotch that’s equivalent to, say, Collingwood 21, you’re gonna pay $200, it’s as simple as that. These $80 and $90 bottles of scotch don’t compare. They’re actually pretty mundane compared to some of the high-end Canadian whiskies.”

That’s pretty much exactly what they said about bourbon when it started to boom. Can we expect Canadian whisky to follow the same trajectory? That remains to be seen. One thing is sure, though—it’s starting to get a little more respect. Our national spirit’s days as brown vodka might be finally coming to an end.

Christine Sismondo is the author of America Walks Into a Bar: A Spirited History of Taverns and Saloons, Speakeasies and Grog Shops, and writes a history column for Maclean’s.