Jonathon Gatehouse on Alexandre Despatie's retirement, an unplanned ending for the diving star 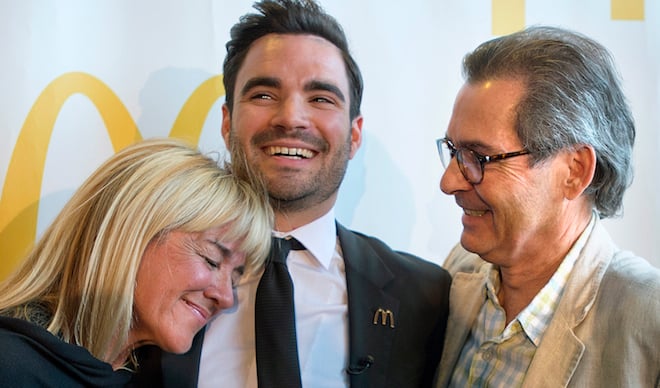 Alexandre Despatie was just 19, and on the cusp of his second Olympics, but it was an old man’s answer.

“I don’t remember the last time I dove and something didn’t hurt,” he said and shrugged. “But that’s normal. The pain is always there.”

He’d already been diving for 14 years back then in the spring of 2004, and had amassed 35 junior and senior national titles, four Commonwealth medals and enough Grand Prix golds to sink his compact frame straight to the bottom of the pool.

However the wear and tear of throwing himself endless off the 10-metre and 3-metre boards in daily practice and during the season, almost weekly competition, had taken a toll. There had been a series of injuries—small and large—that had hampered his training in the run up to the Athens Games. It wasn’t an excuse, just his reality.

That August, he withstood not just the pain but the pressure and captured Canada’s first-ever Olympic medal in men’s diving, a silver in the 3-metre springboard. It was a clutch performance. Heading into the final as a favourite for gold—he had far outperformed his rivals in the preliminary and semi-final round—Despatie seemed unbeatable. But a spectacular miss on his second dive of the night left him in a deep hole and seemingly out of contention. It took three almost-perfect plunges to climb back onto the podium. And the comeback became sweeter still when the final scores showed he had amassed two points more than Dmitri Sautin, relegating the Russian diving legend to bronze. (Payback of sorts for the 10-metre competition four years earlier in Sydney when Sautin pushed Despatie, then the youngest member of the Canadian team at just 15, off the podium into fourth.)

In the run-up to the 2008 Beijing Games, Despatie battled back problems, then broke his foot in a pool-side accident and had to take seven weeks off, missing all of the tune-up competitions. But when it counted, he again showed what he was made of, repeating as silver medalist in the 3-metre competition. “My silver is gold to me, after all of the bad things that happened,” he said that night, smiling down at the gleaming disc that lay against his chest. “I dove for me.”

This past summer in London, there was no magic—Despatie ended up 11th in the 12-man springboard final—but it was minor miracle that he competed at all. In June, training before a World Cup meet in Madrid, he had smacked his forehead on the diving board, opening up a 10-cm gash, peeling back his scalp and sustaining a concussion.

Announcing his retirement at a Montreal news conference today, Despatie acknowledged that it wasn’t how he wanted things to end. After the Games, he had hatched a plan to carry on for at least one more season, but a flare-up of tendonitis in his knee required surgery that kept him away from training. And facing his 28th birthday this Saturday, he was forced to finally acknowledge that, for a diver at least, he is ancient.

Fellow athletes had always told him that he would know when it was time to go. “At one point I just knew,” Despatie told reporters. “It was like a weight lifted off my shoulders.”

There’s talk of taking advantage of his dark good looks and launching a career as a broadcaster, or maybe even in acting. And maybe 20 years from now, that’s why most will know the name Alexandre Despatie.

But his sporting legacy was cemented long ago, starting as a skinny 13-year-old who seemed to float down off the 10-metre platform on his way to his first Commonwealth gold in 1998 in Kuala Lumpur. The final career line reads: two Olympic medals, a World Champion in three different disciplines, eight Commonwealth Games golds, four more at the PanAms, dozens of Grand Prix podiums, and Canadian champion a staggering 46 times.

“The Great” hardly begins to describe it.