All aboard Team GB

From athletes and fans to politicians and young royals, the Games united a nation 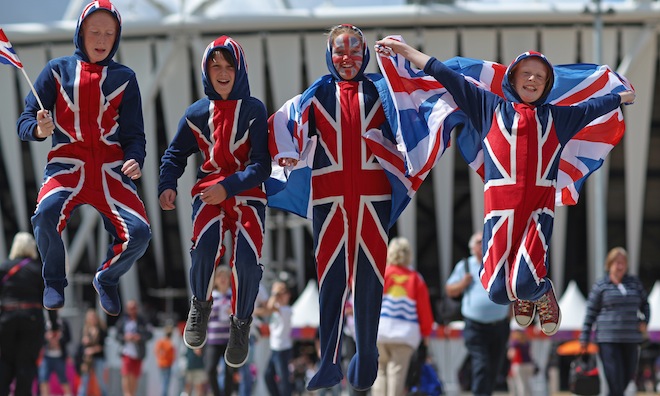 It’s no exaggeration to say many Britons dreaded the start of these $14-billion Olympics, tallying the cost of a potentially disastrous exercise in bread and circuses as if disapproving partners in the accounting firm of Scrooge, Whinge, Grumble and Sneer. When exactly that changed is hard to say, but it’s dead certain Danny Boyle’s exuberant and cheeky opening ceremonies played no small part. Nothing quite says “party hearty” like having what looked like a parachute jump by 86-year-old Elizabeth II, Queen of the United Kingdom of Great Britain and Northern Ireland and of her other Realms and Territories, Head of the Commonwealth and Defender of the Faith. It sets a tone at the highest level. It says: “We are amused; this will be pulled off together with style and grace and wicked good fun.” And so it was.

The British public “has cast off its often grumpy carapace and taken to the Games with spontaneous Latin exuberance,” intoned the Times of London. “No one in London,” diagnosed Boris Johnson, the city’s gloriously verbose mayor, “is immune to this contagion of joy.” The four-minute miler and Olympian Sir Roger Bannister, writing in the Mail on Sunday, recalled the austerity Olympics of 1948, “a feat of courage and optimism” in a war-scarred London. “How thrilling it is to see that we have done it again, and have risen to the occasion.”

Overnight, Union Jacks sprouted from car aerials, faces were painted, and the 70,000-strong army of volunteers pointed the way to a happier time with their giant purple foam fingers. Or better yet, sang their directions reggae-style as one dreadlocked chap did at the rail stop outside the venue for wrestling, judo and weightlifting. “ExCel Centre, go to de right,” he sang in endless loop. “Yes you muss go to de right.”

Of course, British athletes winning gold medals by the bucketful across the full spectrum of sport didn’t hurt the mood one bit. It was amusing, if a bit unsettling, to watch BBC’s normally staid “presenters” leap from their seats with orgasmic intensity with every Team GB win to whoop and high-five and do little interpretive dances of joy. When U.S. broadcasters start to mutter about jingoism run amok, a subject in which they are expert, it’s clear a corner has been turned and the Brits have shed—for a time—their weary cynicism to embrace a shared adventure.

The sporty young royals took a cue from the head of the firm. William and Catherine, the duke and duchess of Cambridge, abetted by Prince Harry, booked in something like 30 sporting events among them, from rowing to field hockey, to the silver medal team equestrian eventing won by their cousin Zara Phillips. Catherine, flying solo, cringed her way through a boxing match, hiding at one point behind her laminated credentials (“HRH DUCHESS OF CAMBRIDGE HONOURED GUEST”), celebrated the bronze medal the women’s field hockey team won, and cemented her reputation as a national good luck charm: 10 medals in 19 events she attended.

The search for legacy and higher purpose began as the Games raced to a close. Sebastian Coe, chairman of the London Olympic organizing committee, called for it to spur a greater emphasis on sport and exercise in schools. British Prime Minister David Cameron—a bit of a bad-luck charm if his medal-to-attendance ratio is analyzed—heaped rather too much on the event. He lauded, in no particular order, its value as an economic stimulus, the boost Olympic volunteerism gives to his utopian view of the Big Society where all selflessly contribute to the greater good, and declared Team GB pride to be an antidote to Scottish nationalism. Even at that, he knows the high can’t last much longer than the flame in the Olympic cauldron, “though I can see why Roman emperors wanted to have perpetual games.”

Come the morn, there’s a faltering economy to consider, the euro crisis and bills to pay. Even that was covered off in the British way of “taking the piss” out of matters. There was Eric Idle at the closing ceremony singing the darkly ironic Monty Python classic: Always Look On The Bright Side of Life.