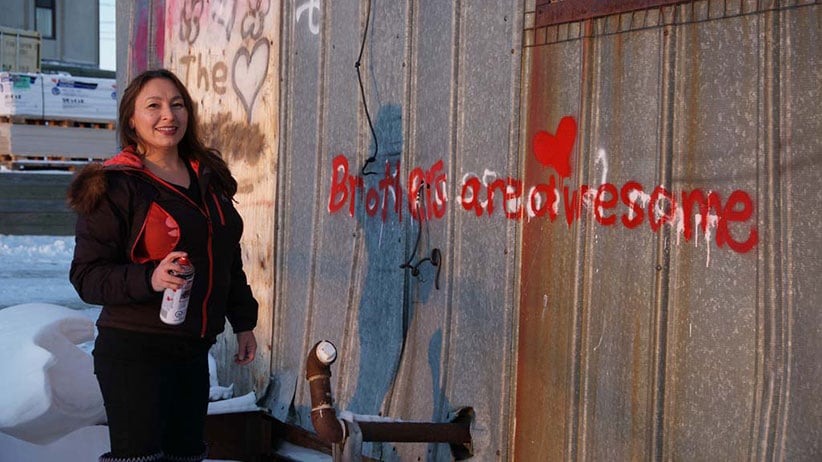 The Frobisher Inn is the largest hotel in Iqaluit and, for many visitors to the Nunavut capital, one of the first sights they see after leaving the city’s recently-renovated airport. On the gravel drive stretching to the four-story edifice, a nearby wooden wall heralds, “Pluck my qiiq.” The phrase is scrawled in black spray paint, and without context—or a working knowledge of Inuit dialects—it’s hard to interpret.

The wall, it turns out, previously bore the words,”Suck my d–k.” The new tag echoes the obscenity phonetically. But qiiq is an Inuktitut word meaning “grey hair,” which turns the marking from an abuse of public space to a chuckle-worthy sentiment.

The “fix” is one of a series around Iqaluit, all the work of the same mastermind: Janet Pitsiulaaq Brewster. Brewster, an Inuk artist and activist, has been waging a guerrilla campaign against offensive spray-painted graffiti, replacing homophobic slurs with messages of support, and aimless profanity with determined positivity. They’re simple acts that repurpose negativity to foster inclusiveness.

She isn’t a graffitist by trade, but Brewster was spurred to action when she noticed a proliferation of offensive messages on Iqaluit’s public buildings. After seeing a wall bearing a plain, old “f–k you,” she began keeping tabs on where similar tags popped up, and what they said, with particular attention to the spaces around the youth centre. Her concern doubled when her son began to sound out words: “It didn’t really sink in until I started having to explain, ‘What does f–k you mean?’”

While graffiti and street art can be found in almost any southern Canadian city (Toronto’s Graffiti Alley even has its own Trip Advisor page), it stands out more in a community of just under 8,000.

Couzyn van Heuvelen, an Inuk artist who splits his time between southern Ontario and Iqaluit, sees marked differences between public space in Southern Canada and the North. “In Toronto, you’re bombarded with advertisements and everything is demanding your attention, so the graffiti can get lost in that,” he says. “Up north, a lot of this graffiti is on pretty plain buildings. They don’t have billboards and ads competing for your attention, so when somebody does do something in that space, it stands out.”

It’s difficult to discern a single motive behind the tags. Some are targeted, intending to humiliate individuals by naming them or vandalizing their property. Others are pointlessly profane. Either way, the heightened visibility makes curbing this behaviour important, says Brewster. “I think when people are wrestling with their own fears and phobias, and overhearing those things being said, it translates into this kind of negative behaviour.” For van Heuvelen, the tags are an outlet for “misplaced anger.” Both agree that it comes from an unconsidered place. Says Brewster: “I think it’s just people being dumb.”

In a culture that celebrates and reveres the arts, the sight of tasteless graffiti can be disheartening. Brewster notes that 26 per cent of Inuit in Nunavut are artists, yet the graffiti across Iqaluit lacks any redeeming artistic quality. “Sometimes I go around and see these things and I think, ‘Where are the artists? Why aren’t people art-ing in public?’” she wonders. 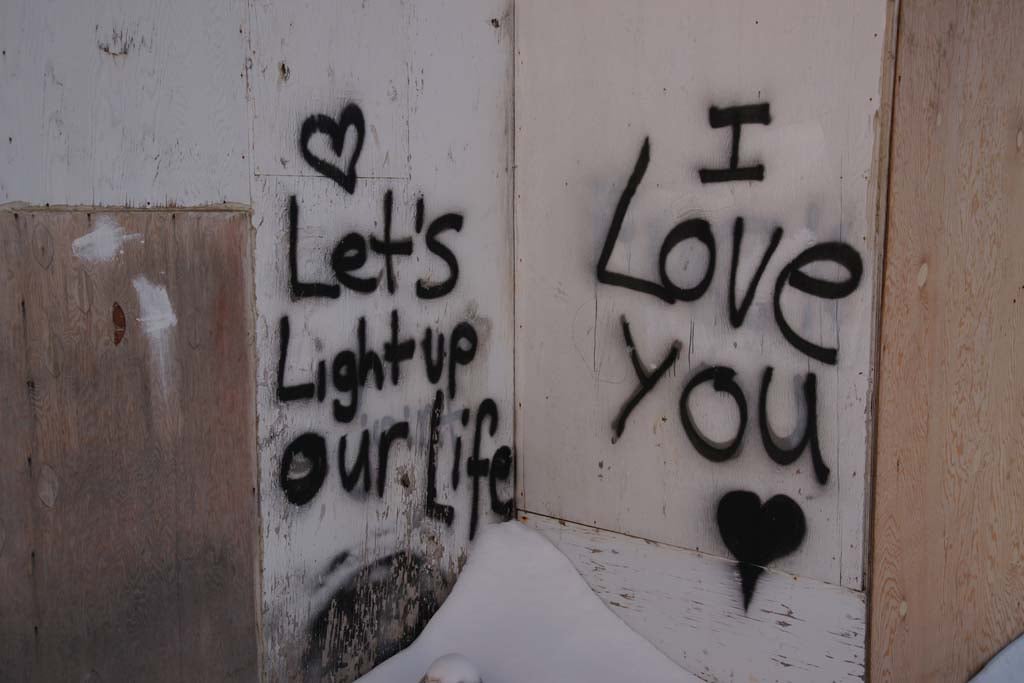 Van Heuvelen noticed Brewster’s graffiti fixes while in Iqaluit as an artist-in-residence at a festival. He and a group of other Inuit artists were carving outside the community centre when he saw two young boys reading one of Brewster’s tags. “I don’t remember what she changed it from, but she changed it to say, ‘I love you,’” he recalls. The boys read it back to one another, sparking a call-and-response of, “I love you!” Van Heuvelen notes that they could have been exchanging obscenities if Brewster hadn’t reclaimed the space. “These kids are mirroring back what they’re seeing and hearing in the world, so to put positivity into that like Janet is doing, it’s pretty amazing to see it in action.”

The reclamation approach is a response to inaction. Derogatory graffiti is usually left untouched by the city and business owners. “I feel a little bit annoyed that there isn’t a beautification plan for Iqaluit,” says Brewster. A Nunavik community called Puvirnituq adopted a graffiti-covering strategy this summer, but Iqaluit has yet to coordinate a program to deal with its graffiti. One tag stood unscathed on a building for two years.

City councillor Romeyn Stevenson says harsh Arctic weather makes it difficult to remove graffiti in a timely manner. And while there isn’t an official position on Brewster’s tags, he agrees they’re better to look at “than the original, often offensive work.”  He views her fixes as a temporary solution—albeit one that “improves the atmosphere of [Iqaluit].”

Cleaning up the negative graffiti is more than just an aesthetic choice, for Brewster; it’s an act motivated by respect for the environment that she likens to picking up trash. “As Inuit, we’re taught to respect our environment,” she says. “One of the most incredible things about being in Nunavut is the beauty that surrounds you, and how incredible the impact is on your mental health. Changing these negative messages is a way of respecting my environment, and allowing people to enjoy being outdoors without being interrupted by negativity.”

Reframing that language and the role of graffiti in Iqaluit is part of a broader shift she hopes will help others. “One of the things that really drives me is knowing that there are so many children and youth who are experiencing trauma in their homes, experiencing food insecurity and poverty,” she says. “It’s important to give them something positive to look at and to do.”

Her voice wavers as she recalls the story of the two boys exchanging declarations of love. “It epitomizes exactly what I’m trying to do: change the narrative from something ugly into something beautiful.”