An old-fashioned game of chicken

Top-quality heritage chickens are all the rage, but just try to get your hands on one 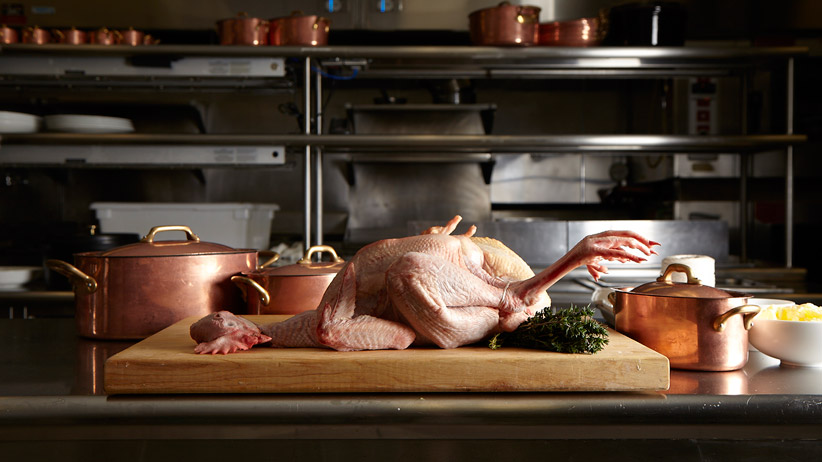 Early in the menu planning for Café Boulud at the Four Seasons Hotel Toronto, Daniel Boulud’s new kitchen team set out to find the most flavoursome heritage chicken that a local Ontario farm could provide. The bird that emerged from the competition with posthumous bragging rights was raised at Grandview Farms, in Thornbury, overlooking Georgian Bay. “You can’t compare these birds to what everybody eats everyday,” Café Boulud’s sous-chef, Luke Kennedy, waxed rhapsodically of the Grandview chickens. “The meat is really, really dark, and the legs are like supermodels’ legs—they’re really, really long.”

Long, slim legs are all but guaranteed to come attached to a tasty, top-quality bird. They are, in fact, its most reliable visual measure. And you should keep that in mind, next time you go shopping for chicken. For, in Canada, labels like “grain-fed” and “free-range” are barely legislated. Yellow skin is less often an indicator of corn in the bird’s diet than of a postmortem spray-on tan. “Organic” refers to feed and is merely a good start. But long legs never lie. They indicate regular exercise and a healthy, natural diet—just as surely as short, squat ones reflect tight living quarters and a junk-food diet conceived to pile on flesh and fat faster than the bones beneath can grow to accommodate it.

Canadian farmers have long specialized in producing the latter sort of chickens—but alas, not quite so efficiently as their American counterparts. And, as much as anything else, that historic problem was what led to the 1978 creation of what’s now Chicken Farmers of Canada (CFC). Besides keeping cheap U.S. chicken at bay, that legislation created a national supply-management system. It featured a farmer-controlled price-setting mechanism—and assigned production-quota rights to existing Canadian poulterers.

As a result, the price of chicken here is nearly double what it is stateside—and chicken farming is handsomely profitable. So now, the quota rights once handed out for free are sold from one farmer to another for scads of cash. And those who own it guard it jealously from perceived threats. With imports barred, that has come to mean small, non-quota-holding Canadian poulterers.

These are known as “small flock” producers, and each provincial subsidiary of the CFC treats them a little differently. In Manitoba, a small-flock producer can rear and sell 4,000 birds each year—a viable business. In B.C., the non-quota broiler limit is 3,000. In Nova Scotia, you can start with 500 birds, and by paying nominal fees—and without purchasing quota—work your way up to annual production of 10,000. And then there’s Ontario, where the maximum is a piddling 300 birds. At that, after having them slaughtered at a provincially certified abattoir, the farmer can only sell them at his farm gate—but he cannot advertise their availability there, not even with a roadside sandwich board. He also cannot sell his chicken to any buyer who intends to resell them, such as a butcher shop or restaurant.

“The small-flock program was not designed for commercial farming,” the Ontario body’s communications director, Michael Edmonds, explained. Message received: Most small-flock Ontario farmers have given up that dream. Buying quota is not much of an option, since a minimum allotment costs more than $1.5 million. With the privilege of ownership, the farmer is required to immediately up production from 300 birds to somewhere between 90,000 and 200,000, which can be awkward, and downright impossible, if—like Grandview—you want your chickens outdoors, roaming free, scratching about for worms and insects.

Grandview does have adequate pasture to raise some 20,000 birds, enough both to keep Boulud’s buyer happy at the farm gate, and also to meet its own needs for affiliated brand Life Choices Natural Foods. So Life Choices applied for the right to buy a quarter-share of minimum quota—and was rejected. So Grandview chicken production is stalled at 300 birds per annum—and the only place you can find one is on a plate at Café Boulud, which buys the lot.