An open letter to work attire

Marie-Danielle Smith: To the Traditional Office Wardrobe now hiding in the back of our closets, we put you on notice. A revolution is nigh. 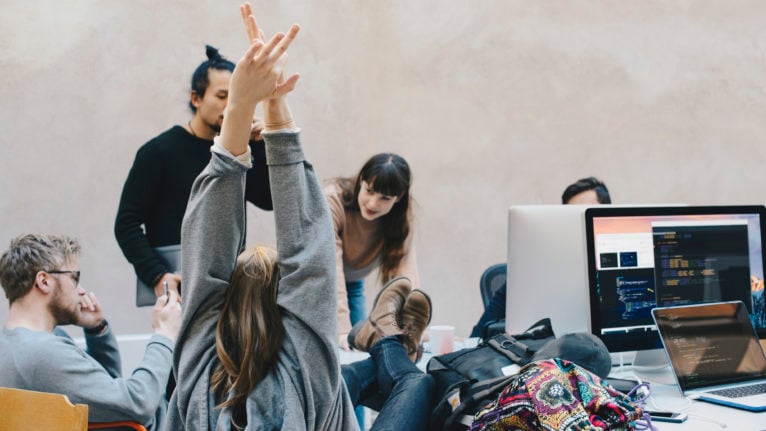 Computer programmers at work, minus the suits and ties (Maskot/Getty Images)

We see you hiding in the back of the closet. The trusty black jacket. The bright-coloured, ill-fitting blazer bought on sale. The tweed. The ladies’ dress pants with impractical pockets. The structured shift dresses with no pockets at all. We see you, crisp white shirt somehow untainted by coffee spills. Have you been worn? Will you ever be worn again?

We are putting the Traditional Office Wardrobe on notice. No, not because our tailored garments don’t fit anymore! No, we haven’t been consuming more junk food during the pandemic! We’re not defensive about this!

Here’s looking at you, specifically, the this-seems-appropriate-enough-I-guess Zoom shirt. You’re not long for this world either. A revolution is nigh. (The forces of illiberalism are not involved. This is not that type of letter.)

Just look around. Classic suits may not feel threatened by the recent choice of former Texas governor and Trump-era U.S. energy secretary Rick Perry to wear a light blue sweatshirt on FOX News. But they should. Because deep down, you know how many longtime glad-handers on Capitol Hill would rather be wearing a sensible polo. Any number of wistful Democrat boomers are wishing they hadn’t chucked the last of their tie dye in the early ‘80s. How long before former president Barack Obama appears on television in a vintage graphic tee? Tick. Tock.

In a 2015 episode of beloved millennial sitcom New Girl, roommates Nick and Schmidt come up with a winning design idea: a suit, but made of sweatsuit material. They call it the “Swuit.” “The swuit goes from day to night and night to play,” fellow roommate Jess tells some venture capitalist, swimming in the light grey prototype. “This is a man who would wear sweatpants at his wedding,” Schmidt says, gesturing towards Nick. “I now pronounce me comfortable,” Nick says.

The boardroom pitch does not go well. Now it’s 2020, and “athleisure wear” is a hot seller, and yoga pants, which have never just been for yoga, are now especially not just for yoga. WHO’S LAUGHING NOW?

The New Yorker is calling 2020 style “slob-chic.” Its essay on the subject debates whether “a nightshirt is more or less schlumpy than pajamas” and describes a judge’s admonishment for recent Florida court hearings in which lawyers appeared shirtless or still in bed (which we do not go so far as to endorse). In May, The Atlantic magazine proclaimed in a headline that “After the Pandemic, the Office Dress Code Should Never Come Back.” In June, The Washington Post explained that fashion psychologists (a real thing!) were predicting trends such as “hoodies paired with blazers” and “sweatpants with silky tops.” Market research firms were identifying a major plunge in the sale of men’s and women’s dress shoes.

Speaking of those. High heels, did you think we would forget about you? The scuffed black ones grudgingly worn to networking events—remember “networking”?—and the strappy summer ones worn exactly once at an outdoor to-do that demanded an interpretation of “cocktail attire.” We now pronounce you extra.

And to the pair of pantyhose languishing in the top drawer: We saved you once. We stopped the run with a glob of nail polish. We thought, maybe, with a long enough skirt, you could be worn again. But now we say: No more. No. More.

We acknowledge that for some, donning a work outfit was an important ritual that separated home life from office life, weekday life from weekend life. That for some, this is a matter of personal style and polished professionalism. That you—the garments in the back of the closet—are sorely missed. That without ironed pants and shiny Oxfords standing by, a Bad Impression could be left, or, in the work-from-home era, one’s most slovenly instincts could be nurtured.

It is a slippery slope from “I guess I don’t need to have a tie on” to “they won’t know if I’m not wearing pants.” We get it. We acknowledge it. We, some of us wearing shorts you can’t go outside in, feel it deeply.

But it’s time, work attire, that you were no longer a strict requirement. It’s time that in places such as Canada’s Parliament, people not be dragged out of the legislature—or the press gallery—for not wearing a jacket. All along, Silicon Valley employers haven’t cared if their employees showed up to work in denim and T-shirts. It’s time for the comfy black jeans that passed for work pants in the pre-pandemic era to be openly acknowledged as an appropriate choice moving forward.

Because if and when office life resumes and takes on something resembling “normalcy,” it will not be you, pencil skirt, or you, weird little vest, that makes it so. It’ll be the sight of human faces, or at least the top halves of human faces, that makes everything feel okay again. It’ll be the quality of the teamwork, and not the fabric of the trousers, that matters.