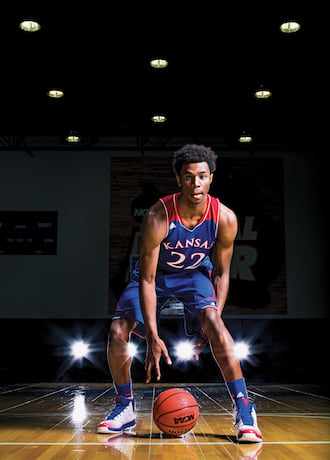 Andrew Wiggins was born and raised in Thornhill, Ont., a suburb north of Toronto. But his legend was born on YouTube, like so many stars of the smartphone generation.

He was still a teenager—a shy, skinny high schooler—and yet millions of strangers had already watched him dunk a basketball. Every new clip, more jaw-dropping than the last, only fuelled his Internet fame. Wiggins was so dominant, so acrobatic, that it was easy to mistake the other players for sixth-graders; he himself once admitted that he couldn’t remember the last time he faced an opponent more talented than him.

By 17, Wiggins was signing autographs and posing with fans and tossing out all the right sound bites. “It’s always good that people look up to me, support me and show me love,” he said during one press conference. “I’m just thankful to be from Canada, be part of it and just rep where I’m from.” Somewhere along the way, he picked up the nickname “Maple Jordan”—a nod to both his national pride and astronomical potential.

For Wiggins, 2013 was certainly a storybook year. A senior at Huntington Prep, a private school in West Virginia, he earned all the top honours: the Naismith Trophy for best baller in the U.S., Gatorade’s high school athlete of the year award, and a trip to the prestigious McDonald’s All-American game, where he was the undisputed main attraction. College scouts drooled over his wingspan and his hang time. The best prospect since LeBron James, they said. If not for new rules, which now prohibit high school players from leaping directly to the NBA, Wiggins would already be a pro—with a lucrative sneaker deal to boot.

In fact, most experts believe he would have been the first overall pick in 2013 (a distinction that just so happened to go to another Canadian, Toronto’s Anthony Bennett, who now plays for the Cleveland Cavaliers).

Is Wiggins a shoe-in for top choice in 2014? Now a freshman at the University of Kansas—and a recent Sports Illustrated cover boy—the 18-year-old phenom has endured some on-court struggles for the first time in his young career. But despite his relatively pedestrian stats (14.3 points per game, at last check), his raw athleticism and lightning-quick first step suggest he will not only live up to the enormous hype, but jump right over it.

If nothing else, he has the pedigree to handle the intense expectations. His mother, Marita Payne-Wiggins, was a record-setting sprinter who helped Canada win a pair of silver relay medals at the 1984 Los Angeles Olympics. (A park in Vaughan, Ont., is named in her honour.) Wiggins’s father, meanwhile, was a high-scoring first-round pick in the 1983 NBA draft. Although Mitchell Wiggins is most remembered for a two-year cocaine suspension, his past mistakes have undoubtedly taught his son a crucial lesson about the pitfalls of stardom—and remaining humble.

When Wiggins announced his decision to attend Kansas, for example, he refused to make it a public spectacle; he signed his letter of intent during a private ceremony and told one local reporter. And when he is obliged to speak to the media, as he did at the All-American game, Wiggins is anything but smug or arrogant. “A lot of people don’t have the opportunity to do this, so I think I’m blessed that I’m getting all the attention,” he said. Asked how he handles the constant pressure of being anointed the next big thing, Wiggins pointed to his parents. “They’ve been here before, they’re experienced, they’re wise in every aspect of being an athlete,” he said. “Whenever I need someone to lean on, they’re always there for me.”

But they don’t baby him. Or feed into the hoopla. Mitchell and Marita rarely speak to the press about their celebrity son, and when they do, they’re quick to point out that their other five children (two sons and three daughters) are also talented, good people. Andrew, the youngest of the boys, is treated no differently than the rest. “The way it should be,” his mom once said.

But on June 26, 2014, Andrew will ascend into a completely different stratosphere. Whether he’s drafted first, second or seventh, he is poised to earn millions of dollars in salary and millions more in hefty endorsement deals. (One report said Adidas is already anxious to sign him for at least US$180 million, while another has linked him to Jay-Z’s Roc Nation sports agency.) Whatever worldwide attention Wiggins has received so far will pale in comparison to what’s coming over the next 12 months.

Especially if his hometown team is lucky enough to secure his services. For years, the Toronto Raptors have languished in the NBA’s basement, still unable to recover from its high-profile divorce with Vince Carter. Snagging Wiggins this summer would instantly resuscitate the franchise—and win countless new fans from coast to coast.

TSN is already broadcasting every Kansas Jayhawks game, well aware that Wiggins is the new face of not only Canadian basketball, but the entire sport. Imagine No. 22 in a Raptors jersey. It’s such an enticing possibility that some sports columnists have urged the team to tank this season, ensuring a better shot at winning the top draft slot.

Even Wiggins, ever diplomatic, has said he would love the chance to suit up for the Raps. “I want to play for them,” he said in July, flashing his famously wide grin.

Wherever he ends up, there are sure to be more growing pains down the road. Wiggins will be just 19 when he makes his professional debut, his six-foot-seven frame still taking shape. In the meantime, he is soaking up firsthand advice from some of his biggest idols, including Jordan, James and Kevin Durant of the Oklahoma City Thunder. “Just take it one day at a time,” they’ve told him. “Just keep playing hard, practising hard.”

As the YouTube evidence clearly shows, that shouldn’t be a problem. If anything, the rest of the league may want to start practising a little harder.