A talented musician, teacher and interpreter, his passion was helping others 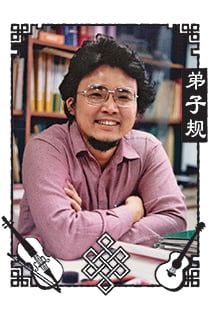 Anthony “Koko” Chang was born May 4, 1951, in Tokyo, to Frank, a Taiwanese civil servant and owner of a European art supply shop, and Aiko, a Japanese university librarian. Soon after his birth, the family returned to Taipei, and two more sons were born: Po and Peter.

Koko got his nickname—used by most who knew him—from the way his mother pronounced the Chinese phrase for big brother. A shy child, he learned both Mandarin and Japanese, but rarely spoke until he was five. He was a devoted older brother and a happy, trusting child. “Whatever the older kids told him, he believed. He’d just do it,” says Nancy Kung, a friend since childhood. During one hide-and-seek game, the children told Koko to hide in a shed and not to come out until he was found. Hours passed, and the game was long over before his worried mother came searching.

Koko grew up playing the violin, and though he wasn’t overly academic, “he loved learning and self-improvement,” Nancy says. His father was an avid motorcyclist, and Koko developed a fixation with one day owning a scooter. In 1967, Frank travelled to Montreal for Expo 67, and fell in love with Canada. Three years later, he sent his two eldest sons to attend high school in Toronto. Koko and his brother found rooms in an old brick house on the edge of Chinatown, and Koko began to teach himself the guitar, practising for hours a day. After he graduated from A.Y. Jackson Secondary School, he studied classical guitar at the University of Toronto. He never graduated, and instead planned to make a living as a guitar teacher.

Koko travelled frequently to Taipei over the next decade, helping at his father’s store, and in 1975 he met Melody, after she responded to his small newspaper ad offering guitar lessons. He thought she was beautiful and Melody was enthralled with his guitar playing. “He was just amazing,” she says, and “he was so different from anybody else” she knew in Taiwan. They wrote letters for the next three years, and married in Taipei in 1979. In 1980, their daughter, Jiejie, was born. Four years later, they had a son, Maurice.

Soon after, the family permanently settled in Toronto, in a four-bedroom red-brick home along with Koko’s parents. Koko was a gentle, affectionate father, says Jiejie, always smiling despite the stress he carried over making enough money through odd jobs like window installation. In 1986, a major stroke left Frank confined to a hospital bed, only able to move his eyes. They sold the store in Taipei, and Koko began working as a manager at a small hotel, then as a concierge at a condo building. Then in 1993, Aiko, who took transit every day to look after Frank, was killed in a subway accident. Frank died one month later. After their deaths, Koko spoke to their pictures in the living room every morning, telling them of his plans for the day and that he loved them.

In 1998, Koko began working as an interpreter, frequently working night shifts at Toronto’s Pearson Airport, sometimes seven days a week. He loved hearing peoples’ stories, and helping new immigrants in his calm, baritone voice. Koko believed in the Buddhist teachings of building peace and doing good in the world—like the free Mandarin classes he gave at a local library. He even looked like a monk in later years, with his head shaved, round glasses and Chinese-style shirts with knotted buttons. He became obsessed with speed walking and good health and, a diligent note taker, marked key dates, like the year he stopped drinking milk (1995) and the day he became a vegetarian (March 23, 2002). In his orange backpack he always carried was a small booklet called the Dizigui, which preaches loving all equally.

In 2010, on a visit to Taiwan, Koko found what he said was his true calling, a health treatment using pressure points called origin-point therapy. He became a talented healer, offering free treatments to colleagues, friends and strangers on the street. “He had so many things he wanted,” Melody says. He wanted to be a tour guide, bus driver and an organic farmer. He did get one wish: In July, he finally bought a red scooter.

On Sept. 10, Koko was riding his scooter in Toronto when he was hit by a truck. Police say the driver agreed to pay $1,000 in damages, and Koko would not make an insurance claim. Two days later, they allegedly met at Koko’s home—that same red brick house—and Koko was stabbed to death. His attacker has been charged with second-degree murder. Koko was 62.