Are 'green' cities a big part of our problem with climate change? 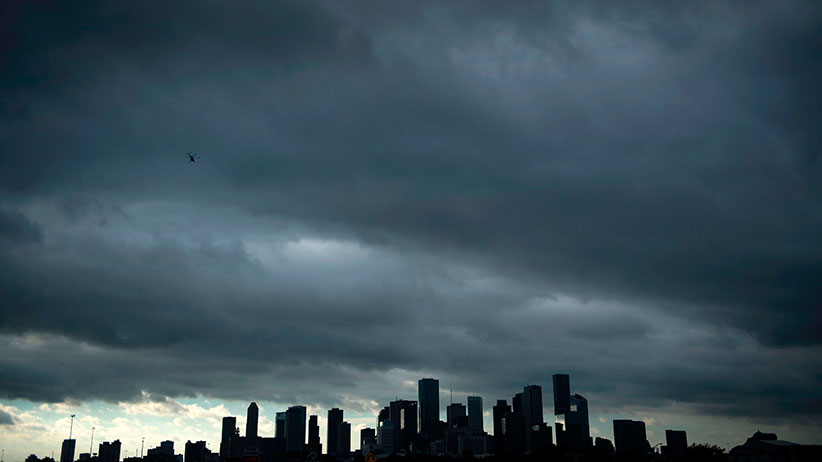 A view of the Houston skyline after heavy rains broke during the aftermath of Hurricane Harvey August 29, 2017. Harvey has set what forecasters believe is a new rainfall record for the continental US, officials said Tuesday. Harvey, swirling for the past few days off Texas and Louisiana has dumped more than 49 inches (124.5 centimeters) of rain on the region. (Brendan Smialowski/AFP/Getty Images)

At a time when the world’s metropolises are thought to be leading the battle against the effects of climate change—especially in the U.S., where a wilfully oblivious federal government pulled out of the Paris climate accord—Extreme Cities: The Peril and Promise of Urban Life in the Age of Climate Change is an unwelcome wake-up call. A deeply researched polemic by Ashley Dawson, a New York professor of English and political activist, the book argues compellingly that so-called green cities are as much a part of the problem as its solution.

Q: You lived through Hurricane Sandy in New York City in 2012. Was that one of the impetuses behind your book?

A: Oh, yeah. I was hunkering down in my apartment in Jackson Heights when the wall started to form a huge blister. The wind was driving the rain through the bricks, so it really felt like nature was invading the apartment. But other parts of the city were hit much worse—in Staten Island, where I teach, some students lost their homes. And people lost loved ones. It was a really dramatic storm that revealed vulnerability all over the city, but in unequal ways.

Q: When I listen to you say, “nature was invading,” I almost hear scare quotes around “nature.” Reading your discussion of how social inequality makes climate disasters worse for some than for others, I’m reminded how experts say there are no natural famines any more. Crops may fail for natural reasons, but famine is a political failure. I’m not sure you believe in “natural” disasters.

A: One of my colleagues at CUNY [City University of New York] for many years was Neil Smith, who wrote a wonderful essay called “There’s No Such Thing as a Natural Disaster.” He was talking about the anthropogenic contribution to storms like Katrina, and then what happened when those storms hit cities that are highly uneven socially and economically. Rich people tend to live on higher ground, while the poor are concentrated in areas more prone to flooding at any time. The wealthy have the means to flee before and to rebuild after. My only note of caution would be that I don’t think that planetary ecosystems are entirely constructed by humanity, although they are biting back in serious ways we have provoked.

Q: Extreme Cities focuses on an aspect of climate change that does not draw a lot of media coverage. The world’s cities are ground zero—especially the mega-cities, most of which are salt-water ports. Those are the places where two rising tides will crest, humanity and the sea.

A: Absolutely. Over the last few decades, neo-liberal globalization has driven planetary urbanization. In wealthy countries and wealthy cities, that plays out through gentrification, the building of luxury condos, huge carbon footprints and displacement of long-term poorer residents. But in the global south, as a result of years of free trade agreements and the dumping of subsidized crops from the EU and the U.S., people are often pushed off their land into cities. That’s one big global dynamic, and the other is increasingly extreme and ferocious weather. Those two forms of extremity are interacting, with cities ever more full of economically marginalized people who tend to be clustered on literally marginal land when a big storm or a particularly hot summer comes. The urban heat island effect drives up the temperatures dangerously—the 2003 heat wave in Europe, which not many people know about, killed more than 30,000 people.

Q: You write of “slow onset” forms of climate change that are often invisible, but which amplify the effects of sudden, violent catastrophes like hurricanes.

A: Like subsidence [sinking], which most people don’t think about very much. But it’s a huge problem in port cities, both wealthy ones like New Orleans and global south cities like Dacca. The ground in delta cities is settling, going down, but people are moving into those areas. In New Orleans, subsidence is a combination of foolhardy practices—putting up levees that choke the delta of sediment, digging canals to look for oil and gas. But in some global south cities, it’s really about getting drinking water where there is no public water system. Tens of millions of individuals in a small area digging their own individual wells means the land is sinking at the same time as the seas are rising.

Q: You do note that Miami is in —. But Florida is full, not just of ironies, but of climate flashpoints. You quote the mayor of South Miami as to why it is urgent to prepare now for mid-century developments. Not to ward them off (too late for that), and not only to be ready, but because the economy will tank along with the environment—there will be no money to cope just when it’s needed.

A: I thought that was really important. Before 2017’s hurricane season, the U.S. National Flood Insurance Program was already $24 billion in the hole. Nobody quite knows what the status of it is now. We have to change priorities while we still can. I am happy to say that in southern Florida I found some quite forward planning about how to help low-income communities retreat from threatened coastal areas in a way that doesn’t leave them economically strapped.

Q: The other pressing issue from Florida was the Turkey Point nuclear station, 40 km south of Miami, which you wrote was one of 14 U.S. nuclear plants that have an excellent chance of being underwater by 2030. That soon?

A: The estimates of sea rise are rising, too, along with the idea higher levels may come, not slow and steady, but in bursts. So, yeah, it’s totally crazy. You know we don’t have any national disposal plans for spent nuclear fuel? The fact that we may be looking at only a 12-year timeline before those places are going to be under water and there’s still no plan about what to do with all that radioactive waste is incredibly alarming.

Q: American cities in particular have a green reputation for leading the reaction to the Trump administration’s withdrawal from the Paris Climate Accord, but you don’t think that reputation is deserved, particularly for your city.

A: Well, it’s not. The long story is New York City was taken over by economic elites largely based in the financial and real estate sectors in the 1970s, when the city had a fiscal crisis. Recent developments along the waterfront in former industrial areas were sold by the Bloomberg administration as luxury condos that would finance green space and incorporate affordable housing for the city’s burgeoning population. Have you seen any of these? Walls of highrises, all modelled on Battery Park City, tiny little parks 7, 8 metres deep. They are important public amenities—just like the bike paths Bloomberg built and all the trees he put in place—but they’re also expensive property constructed in flood zones! And in terms of helping the masses of people living in New York, where affordable housing isn’t affordable and there’s not very much of it—those developments are both a social and an environmental crisis.

Q: You haven’t abandoned the idea of climate-change prevention yet, although you think adaptation is increasingly required. Both are significantly disruptive?

A: I think that the struggle for meaningful mitigation really is an important one, but it would need a kind of Second World War-style mobilization, so we should also be thinking about adaptation. There have been some quite forward-thinking proposals, like the Rebuild by Design program. Some stuff is being implemented, and there are efforts to use landscape architecture to shift people’s way of living and make it more in harmony with nature. But that faces a fundamental contradiction—it flies in the face of our unsustainable form of contemporary economic development. And our attitudes: we like a good, hard edge—a seawall—between humanity and nature, whereas anybody thinking about this wants softer borders, areas that absorb, like marshes, and blend into nature. There’s this kind of macho imperial American rhetoric of “build it back” after a storm that hurts communities that might want to relocate.

Q: But successful adaptation inevitably leads to retreat from the (present-day) water’s edge—and to the politically loaded topic of climate refugees.

A: It’s difficult right now to think about these issues because of the way in which the idea of climate migration has been colonized. It started out as something that environmentalists in the wealthy countries were using to say, “Unless we really cut emissions, there will be mass displacement in the global south and people will be coming here.” That turned out not to be true—so far. Most people displaced by climate crisis, or the interconnected warfare that emerges from it, don’t come to the global north. They get displaced to nearby cities or countries. But the “refugee” language has been colonized by anti-immigrant sentiment to inspire fear. You want to acknowledge that increasing numbers of people are going to be displaced but you don’t want to play into this kind of right-wing rhetoric.

Q: It’s led to popular support for Fortress Europe—as seen in the reaction to Syrian refugees—and to Fortress America, with millions obsessed with their southern border. But In the end, do you think we will have to relocate a lot of people?

A: Retreat can happen in a lot of ways. It can be retreat upward, with buildings that are able to absorb storm surges on lower floors. It can be a retreat from shorelines or it can be large-scale population movements within states or even between states. We need to start having conversations about what this would look like, if we do it slowly and carefully, with full consultation from the affected people. In the U.S., we have moved masses of population willingly, by our economic policies over the decades, from the Rust Belt and the northeast to the southwest and the south, right into the areas that are going to be most affected by climate change. We really need to start talking nationally about mobilizing not only for mitigation, but for adaptation.

FILED UNDER: Ashley Dawson Editor's Picks Extreme Cities: The Peril and Promise of Urban Life in the Age of Climate Change green cities Hurricane Katrina Hurricane Sandy Neil Smith The Vault There's No Such Thing as a Natural Disaster