Are we ready for a sexy Queen Victoria?

A new TV series shows her as a flirty teenage queen. But is there such a thing as too much royal sex? 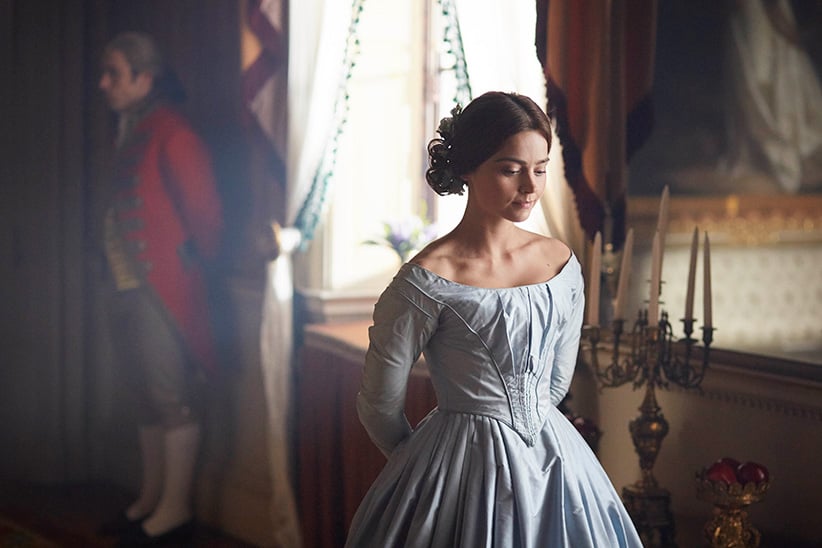 Episode One – “Doll 123” from Victoria on Masterpiece. As a new queen, the young Victoria struggles to take charge amid plots to manipulate her. Victoria’s friendship with the prime minister leads to a crisis in Parliament. Shown: Jenna Coleman as Queen Victoria. (ITV Plc)

Like all long-lived monarchs, Queen Victoria is best remembered for how she looked at the end of her life—a black-clad widow with a penchant for scowling in photos. Just four foot 10, she was so grossly overweight that her bloomers boasted 107-cm waists.

Yet, as Victoria—a new series starting Jan. 15 on PBS’s Masterpiece—shows, the 19th-century monarch came to the throne a flirtatious, vivacious 18-year-old. Like any teen, she wanted to dance and party rather than deal with paperwork. Every eligible prince in Europe wanted to marry her, every politician wanted to mould the immature, ill-educated monarch to their advantage and even her mother’s motives were less maternal concern and more personal advantage.

By focusing on the monarch in her early adult years, Victoria is the latest TV series to inject a sizable dose of sex appeal into a genre known more for well-acted but stodgy correctness than low-cut cleavage and amorous encounters. Netflix’s The Crown prominently featured the naked butt of an athletic Prince Philip while an avalanche of naked flesh can be viewed on The Royals (E!), which delves into the peccadillos and philandering ways of a fictitious royal family led by actress Elizabeth Hurley.

While The Royals is scrumptious Hollywood make-believe, the rest of the royal soap operas have a frame of fact on which varying amounts of fiction are draped. The first to turn royalty into a suggestive soap opera was Reign. About to start its fourth and final season on the CW network, the drama is a raunchy, highly fictionalized take on Mary, Queen of Scots that is aimed at the teen market. Given its audience demographic, it’s no wonder that Reign is a heavy on romantic encounters and intrigue, and rather lighter on history (though Mary had a famously complicated personal life, including three husbands.)

The sexy royal drama phenomena are very much a queen- and princess-focused trend. Their positions of power in male-dominated societies make them easy fodder for scripts (the spectacular settings, dresses, tiaras and crowns don’t hurt). It also helps that there’s plenty of royal women to fictionalize, complete with eventful reigns and turbulent times.

It’s only natural that Victoria would be a subject of this trend. She came to the throne in 1837, the same year the first commercial telegraph was patented. Two years after she died, in 1901, the Wright Brothers took their first successful plane ride. She was crowned a queen, but died an empress, reigning over a quarter the world’s land. She was a queen at 18; her husband died tragically young; the marriages of their nine children made her the grandmother of Europe.

And she liked sex. A lot. And wrote about it in her diaries. A lot. Here is her note about her wedding night with Prince Albert:

I never, never spent such an evening!! My dearest dearest dear Albert sat on a footstool by my side, and his excessive love and affection gave me feelings of heavenly love and happiness, I never could have hoped to have felt before! He clasped me in his arms, and we kissed each other again and again! His beauty, his sweetness and gentleness,- really how can I ever be thankful enough to have such a Husband! – At ½ p.10 I went and undressed and was very sick, and at 20 m. p.10 we both went to bed; (of course in one bed), to lie by his side, and in his arms, and on his dear bosom, and be called by names of tenderness, I have never yet heard used to me before – was bliss beyond belief! Oh! this was the happiest day of my life! – May God help me to do my duty as I ought and be worthy of such blessings!”

When Victoria, an ITV-PBS co-production aired in Britain last fall, it was a ratings blockbuster. That’s good news for PBS’s Masterpiece, where it airs Sunday nights at 9 p.m., as they’ve had a huge hole in their winter schedule since the end of Downton Abbey. Masterpiece is hoping viewers will enjoy watching royal shenanigans as much as they craved the aristocratic ones of the Crawley family. Into a classic soap opera trope—complete with palace downstairs servants as dysfunctional as the upstairs crowd—its creators have whipped up a frothy, fun drama. Based on author Daisy Goodwin’s bestselling fiction version of the queen‘s early life, it makes significant departures from reality to keep the plot chugging along. On screen Victoria falls for her first prime minister, Lord Melbourne, played by the charismatic Rufus Sewell. In real life, there was no teenage crush on a man 40 years her elder.

Watching these royal dramas, the question arises: is there such a thing as too much royal sex?

A completely unscientific survey of friends and colleagues revealed that monarchs are perceived a bit like parents: we aren’t keen on thinking of them having sex, let alone liking it. Luckily for the creators of Victoria, this prudishness seems to be largely a concern for royals who are still living, given the reaction when The Crown dropped a not-so-subtle allusion to Philip and Elizabeth ending an argument with a romp in the bedroom.

While Victoria‘s first season focuses on the first years of her reign, including falling for Prince Albert, there’s plenty more real-life plots to plunder: she’s got eight more children to deliver and an empire to be built. No wonder a second season has already been ordered.