As 2020 approaches a merciful end, we look back at truths, exploded

Our editorial: The experience of 2020 has deeply challenged many of the things we assumed to be true. Maclean's delved into what's changed in this fateful year. 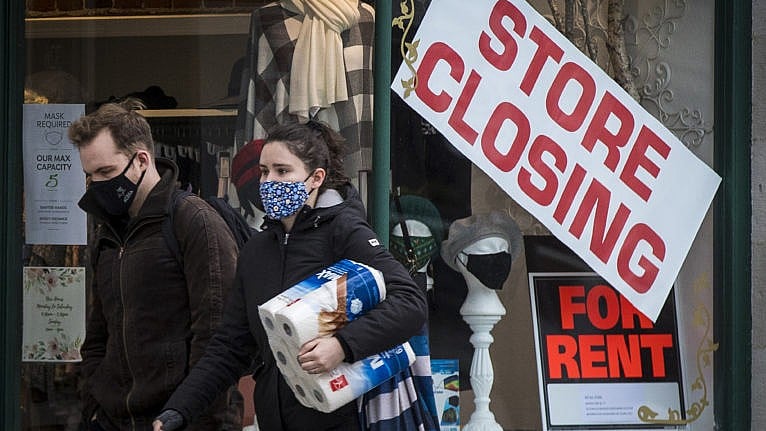 People wears masks as they walk past a store that is closing in Kingston, Ontario on Monday, November 16, 2020, as the COVID-19 pandemic continues across Canada and around the world. (Lars Hagberg/CP)

It seems almost cruel to point this out, but 2020 was once considered an aspirational year. Thanks to its association with perfect eyesight, “Vision 2020” had an extensive reign as the preferred title for anyone making hopeful, long-term plans.

In 1999, the World Health Organization used Vision 2020 for its global campaign, still ongoing, to combat blindness and visual impairment. Nigeria’s 2008 plan to become one of the world’s 20 largest economies was also called Vision 2020, as was a long-run fiscal and demographics research project begun in 2004 in Alberta. (Budget prediction for 2020: a $7-billion surplus. Actual result: a $24-billion deficit.) The Dietitians of Canada used Vision 2020 as the title for their 2007 plan to promote “healthier lives and lifestyles for Canadians.” So too with McGill University’s Office of Sustainability, the College of Nurses of Ontario, the European Union’s statistical agency, the United States military, the Toronto Foundation and on and on and on.

We now know, of course, that 2020 is nothing to look forward to. But what have we learned as a result?

START HERE: 2020 was the year that changed everything

As our truths package explains in greater detail, the experience of 2020 has deeply challenged many of the things we assumed to be true. The idea for the project started with Lianne George at the Brookfield Institute for Innovation + Entrepreneurship, a non-partisan think tank at Ryerson University whose vision of a “prosperous Canada where everyone has the opportunity to thrive in an inclusive, resilient economy” is hard to dispute.

George’s idea was to tackle exploded truths and “reflect on how things worked, why they are no longer working and how we might make things better.” We have quoted Brookfield experts in a few of our stories where their expertise made the most sense, although Brookfield did not have editorial oversight of the project, nor did any money change hands. This was a partnership born of the love of a great idea—the very best kind.

Back in January, few Canadians would have guessed that in-person shopping could become such a fraught experience. That our protection of the frail and elderly would be revealed to be shockingly flimsy. That the federal budget could blow up to unprecedented levels. Or even that it would be desirable to sit on a patio in Canada in November.

We explore many of these exploded truths in our project, and yet not all of our discarded assumptions about life in 2020 had unhappy endings. We once thought, for example, that governments were ponderous, hidebound institutions with an overweening preference for the status quo. Not so. The Canadian Emergency Response Benefit was rolled out in mere weeks; over its six-month em, it disbursed $81 billion in much-needed relief to nearly nine million out-of-work Canadians. In the pre-pandemic era, this sort of large-scale program would have taken years of study, trial ballooning and piloting. And then more study.

Broad acceptance of our collective responsibilities in pushing back against COVID-19 and its many pathways of infection should also be considered a heartening revelation. We wear masks because doing so helps others. The same goes for ubiquitous disinfection routines and social distancing practices. That incumbents have been returned to office with solid majorities in every post-pandemic provincial election further suggests the public supports these measures, and appreciates the difficult balancing act politicians face in weighing public health imperatives against economic realities. Today, Canadians appear more unified in their shared sense of duty than at any time in recent memory.

As 2020 comes to a merciful end, we ought to focus on the new truths and understandings that will make the next few years safer and more productive. The year 2020 may not have arrived with perfect vision, but we’re seeing more clearly now.