At their visit's end, royals thank Canada for family memories

'I hope we have helped all Canadians celebrate what makes this country great. We will see you again soon.' 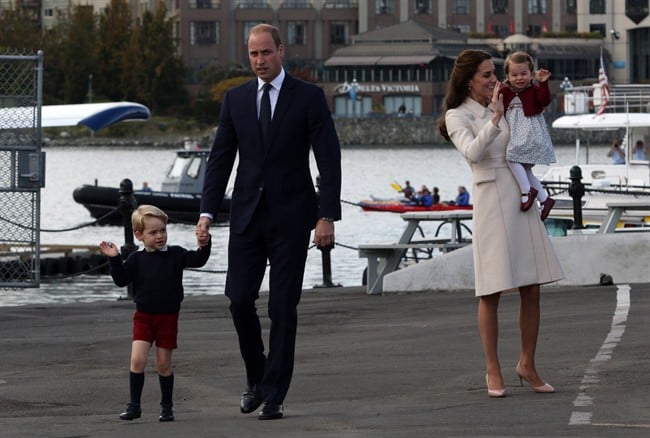 The Duke and Duchess of Cambridge with their children Prince George and Princess Charlotte, make their way to a sea plane to mark their official departure from Canada in Victoria, B.C., Saturday, October 1, 2016. (Chad Hipolito/CP)

VICTORIA – The Duke and Duchess of Cambridge expressed their gratitude Saturday for the welcome they received as they wrapped up their tour of B.C. and Yukon by bringing attention to social and mental health programs.

Prince William and Kate said the trip was memorable because they brought Prince George, 3, and Princess Charlotte, who is 16 months, with them for the children’s first visit to Canada.

“We feel very lucky to have been able to introduce George and Charlotte to Canada,” Prince William said in a statement. “This country will play a big part in the lives of our children and we have created such happy memories for our family during this visit.

“Canada is a country of optimism, generosity and unrivalled natural beauty. I hope we have helped all Canadians celebrate what makes this country great. We will see you again soon.”

The royals boarded a seaplane at Victoria harbour after the official farewell attended by Gov.-Gen. David Johnston, his wife Sharon and B.C. Premier Christy Clark.

Prince George, wearing red shorts and a blue sweater with knee-high blue socks, waved to the crowds as he walked down a ramp to the harbour. He held his father’s hand while Kate carried Charlotte, who wore a light blue dress and red cardigan.

On the dock, George turned toward his father when 11-year-old Daniel Brachman offered him a high-five after presenting Kate with a bouquet of flowers, bringing back memories of the start of the tour when the young prince declined a similar gesture from Prime Minister Justin Trudeau.

Earlier Saturday, William and Kate unveiled a statue in Victoria that pays tribute to those who overcome challenges at the Cridge Centre for the Family, a non-profit society that offers programs for people with brain injuries, victims of domestic violence, as well as infant, family and seniors care.

The royal couple have championed a number of the same social causes in the U.K.

A large part of their eight-day tour has focused on social and mental health issues as Prince William began the visit saying he and Kate wanted to meet as many Canadians from as many walks of life as possible.

They visited Vancouver’s most impoverished neighbourhood, the Downtown Eastside, participated in First Nations ceremonies in Bella Bella and Haida Gwaii, B.C., and met residents in the small northern community of Carcross, Yukon.

Val Fuller, president of the board at the Cridge Centre, said the royal couple’s visit touched “the common thread of the courage to overcome.”

“You presence here today is a true reflection of your genuine commitment to change lives,” she said to William and Kate. “Whether the United Kingdom or Canada, whether the Royal Family or just the folks here in Victoria, in the end we are all people who are privileged to be able to reach out our hands and raise our voices to help one more overcomer on their journey.”

MORE: The royals’ grittiest tour ever

William and Kate also met with representatives of the Kelty Mental Health and Resource Centre, which provides support to children and their families in need of mental health services. The centre, and the foundation that helped develop it, is named after Kelty Patrick Dennehy, who died by suicide at the age of 17.

While the centre is located at the B.C. Children’s Hospital in Vancouver, it is still accessible to the estimated 140,000 children and youth who experience mental-health disorders across the province.

The royal couple had tea with young people who have used the service.

Jasmine Rakhra, 21, who has suffered from depression since she was a child, said William and Kate asked questions about how she is managing her life and she felt they genuinely cared.

“It was a very great experience,” she said.

William and Kate’s last stop was on board the tall ship Pacific Grace, operated by the Sail and Life Training Society, a charity that teaches young people aged 13 to 25 to sail.

Aboard the ship were youth involved in programs run by Jack.org, a charity that supports student leadership in promoting mental health. The charity was started by the parents of Jack Windeler — a student at Queen’s University in Kingston, Ont. — after his suicide in 2009.

The Pacific Grace took the royal couple on a cruise of Victoria’s inner harbour. When it returned, Kate could be seen at the helm.

There were also gifts on the final day of the visit as Clark presented William and Kate with child-sized Vancouver Canucks jerseys with Charlotte and George on the backs.

The federal government announced a donation of $100,000 to be split equally between two organizations to mark the visit.

Half of the donation will go to the Prince’s Charities Canada to promote education in indigenous communities and help young people, while the other half will be donated to the Immigrant Services Society of British Columbia to help new arrivals with housing, employment and language skills.