A bright, artistic girl, she left England for a working holiday in Canada. She found love and a booming life in Calgary. 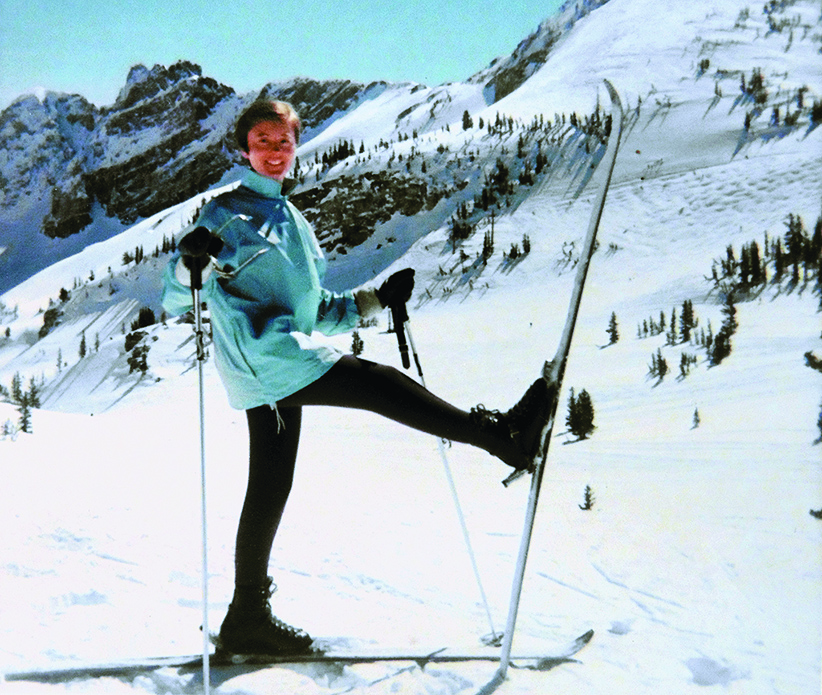 The family lived in Banstead, outside London. Audrey was a bright, spirited girl. Like her mother, she loved fashion and often sketched out dress ideas. When Audrey was 16, her father died of cancer. Agnes went to work as a dress maker. It was a difficult time for the family. Banstead was “a bit posh, upper crust,” says Victor. “I don’t think Audrey liked people to know she was working-class.” Strong-willed, she “wanted to move up in life and improve herself.”

One summer day in 1946, at a Butlin’s holiday park, Audrey met Valerie Walker. The two girls played tennis and attended nightly dances. Audrey, says Valerie, “was a born leader. She would say, ‘Come on, let’s do this.’ And we did it.” At 16, the two began heading to London’s Soho entertainment district to hit up jazz clubs. “We didn’t have money to buy decent pants,” recounts Valerie. “So I would stand on a table. Audrey would fold the seam over on my jeans and sew them up to tighten the legs. Getting them off was like peeling off stockings.”

Audrey was offered an art school scholarship. But with her mother struggling to support the family, she chose instead to study at a business school. After graduation she worked as a secretary.

In the early ’50s, Audrey, Valerie and two other girlfriends made trips to Paris, southern France and Italy together. In 1956, one of those friends, Bobbi, was visiting Canada and suggested Audrey and Valerie come over for a working holiday. They booked passage on the S.S. Groote Beer, telling their families they’d be gone six months. They landed in Montreal on Sept. 26 and, with her polished secretarial skills, Audrey easily found work.

The following summer, Valerie went to Calgary. Audrey followed a bit later. In 1958 Audrey, employed at a Calgary law firm, met Fred van Zuiden, then working at Giant Battery Company. The two “just clicked,” says Valerie. They married within three months. Fred soon bought Giant Battery and Audrey joined him at the company. In 1964 they morphed the company into Glenmore Boats & Batteries. Manufacturing and selling a variety of watercraft, it became the premier sailboat company in Western Canada. Life was prosperous and full. Audrey and Fred were avid hikers and skiers. To satiate Audrey’s love of the arts, they frequented concerts and galleries around the world.

Though they were in the boat business and Fred was an avid sailor, Audrey rarely got on the water unless it was glassy calm. When Audrey was a teenager at camp, another girl panicked as she jumped into rushing water near an open lock. She grabbed Audrey, who was trying to help, and nearly drowned her.

But she could certainly sell boats. When the van Zuidens’ once-prospering business went into receivership in 1982 as Alberta’s economy sank into recession, Audrey revived it in 18 months. “She was queen of the soft sell,” says Gordon van Gunst, who bought the van Zuidens’ business in 2001.

Seven years after selling the business, Audrey spent two years helping Fred write a bestselling book, Call Me Mom: A Dutch Boy’s WWII Survival Story. Published in 2009, it recounted how, as an 11-year-old Jewish boy growing up in Holland, Fred narrowly escaped the Nazis. By the time Holland was liberated, he’d been hidden in 26 different places, including a chicken coop, by successive Dutch families.

Fred, whom van Gunst describes as a “lovable teddy bear,” started showing signs of dementia five years ago, though Audrey, fiercely determined to look after Fred herself, first tried to hide his illness. “She was trying to protect him,” says Valerie. “She thought she could manage on her own.”

Audrey was increasingly frail, though at 79 she still managed to go downhill skiing. In contrast, Fred, five foot 11, was still a robust 180 lb. But with his dementia worsening to the point where he often forgot who Audrey was, she finally considered putting him in a care facility. On the night of Oct. 11, Fred called 911 and let police into their condo. Friends suspect Fred, startled by something, got up and, unable to recognize his wife who came to his aide, mistook her for an intruder. Police found Audrey, 80, dead from blunt force trauma. Fred, 85, was charged with second-degree murder. On Dec. 2 he was found unfit to stand trial.