He survived childhood health scares and the Cambodian genocide. In Canada, he found his voice and a sense of freedom. 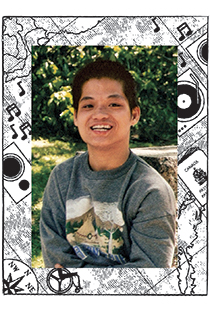 Bandith “Barry” Ek was born on March 18, 1973, in Phnom Penh, Cambodia. As a baby, he did not know how to suck milk from a bottle so his mother, Vanny, and father, Kheang, fed him milk by spoon. A year later, his sister Leakhena was born. The four lived a happy life together until 1975, when the Khmer Rouge, under leader Pol Pot, took power and Barry’s parents were forced to work on a farm for the Communist party.

One day, Barry had a very high fever, but there were no doctors around and Barry fell unconscious. A local who knew a bit about natural herbs tried to help. Barry’s fever subsided, but his health did not return to normal. He couldn’t move the right side of his body. Barry was later diagnosed with cerebral palsy.

When Barry was three, followers of the genocidal Pol Pot regime came to his family’s home and tied Kheang’s arms behind his back. Barry cried uncontrollably as he watched his father taken away to be killed. After that day, Barry’s health worsened and talking became more difficult. Vanny was forced to move away from her family to work on another farm, so Barry lived with his grandmother and sister. The three lived in hunger and fear every day. Barry had no wheelchair, so he depended on others to carry him to get around. He saw his mother every two to three months.

In 1979, when Vietnam invaded Cambodia to fight the Khmer Rouge, Barry and his family, including his mother, escaped to Vietnam. For days, the family walked with little food and no shelter. Vanny carried water and clothes, while Barry’s 60-year-old grandmother carried him. They entered a Vietnamese refugee camp in 1980, and while life was better, they did not feel free, according to Vanny. In camp, Barry could do little but eat, sleep and sit in front of their home, built of clay with a straw roof, watching the days pass.

In 1988, with the help of the Community Christian Reformed Church in Kitchener, Ont., Barry, his mother and his sister were sponsored to come to Canada. Barry was especially excited. “Words cannot describe it,” Vanny explained via a translator. “It’s like being reborn.” When the family arrived in Kitchener, they met Jim and Kaaren Damsma, who were a “friendship family” that helped the newcomers. Barry treated them like second parents.

Though his speech was slurred, Barry picked up English quickly. He already spoke Cambodian, Vietnamese and Teochew—a Chinese dialect. In 1992, he graduated from high school. His mother had by then remarried and, in 1993, Barry had a half-brother, Dennis.

In 1998, Barry moved out from his parents’ place to live on his own. His apartment was full of speakers and electronics. “He loved singing, even though he didn’t sing clearly,” Leakhena says. “He wasn’t shy at all.” Barry also didn’t like to see himself as handicapped, so he would crawl around his apartment instead of using a wheelchair. The place was kept spotless. “If he could do anything himself, he would,” Vanny added. “When people needed help, he would offer to help right away without a second thought.”

The happiest day of Barry’s life came in 1999 when he became a Canadian citizen. He would talk about freedom and his ability to travel the world. He spoke of one day seeing his home country of Cambodia again.

With growing independence, Barry also became more social and outgoing. He would frequently visit Kitchener’s Fairview Park mall and chat with staff members, who became his friends. “He’d scoot around in his wheelchair really fast and spin it in circles every time he got excited,” says Katelyn DeMerchant, who worked in the food court. “You could feed off his energy.”

After trips to the mall, Barry would often go sit by Victoria Park Lake. “It’s where he felt normal,” Katelyn says. “He’d get out of his chair and just sit on the rocks . . . It was his happy place.” Katelyn and her family would take him for car rides or out to eat. When they went to a restaurant, it was called “chicken wing and beers night.”

On June 21, Barry visited the mall before going to sit next to Victoria Park Lake. He climbed out of his wheelchair to sit by the rocks alone, as he had done so many times before. Later that evening, passersby noticed an empty wheelchair and personal items floating in the water, including headphones. Barry had drowned. He was 40.