A six-foot-four guard is Burlington, Ont.'s best hope for a future NBA star 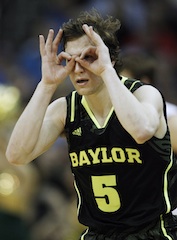 Every spring, campuses are full of students anxious to return home, and Brady Heslip is no exception. What is exceptional is how he spent this spring: tromping through the NCAA tournament, flashing his signature “3 point goggles” salute, winning academic awards, and emerging as Burlington Ont.’s best chance at a future NBA star.  The 21-year-old, six-foot-four Baylor Bears guard deftly abides pressures of school and basketball, and then takes the long trip home from Waco, Texas, to the suburban house he shares with his mom, where he’ll kick back and bake banana bread (seriously, his mom swears it’s true).

Heslip’s Mom, Jodi Triano, is excited for the arrival of her boy, who will breeze into the house with his “too many clothes and shoes that spill out into all the rooms.” Accustomed to the company of sportsmen (her brother Jay is a former Olympian and the first Canadian-born coach in NBA history), she says that her son, “lights up the house, and it’s great to re-connect with his gaggle of friends.”  She adds, “I am most proud that he has stayed so level-headed. He hasn’t let the hype disrupt his focus.”

When throwing up his trademark “goggles” (touching thumb to forefinger, and putting the ring around his eye), Heslip could be boasting about this focus, frequently credited as the key to his ascent. With a hint of emerging an Texan drawl, he says his main goal is “to graduate from Baylor a better person.” It’s a broad outlook, but one synthesized through concentrated and dogged training, as he shed 20 pounds before last season began. “There is no secret, just work hard, eat well, put in work in the gym, and watch yourself on film—you see it all in the game”

Whether or not he indulges the temptations of Texas barbeque or Baylor’s nightlife, Brady rises at dawn to exercise, before studying, then an evening workout, and pick-up basketball—a regime he continues when home on vacation.

And what keeps him level-headed is constant communication with family, and with the people he says, “have been my best friends since we were in Grade 5.” Even when he’s only home for a few days, Brady drives to Niagara Falls to visit his grandparents. He watches movies with his grandpa, and grocery shops for his grandmother. In Brady’s youth his grandparents were always there for him (he was raised by a single mom) and even as a sports celebrity, he wants to be there for them.

“Easter weekend, he was out partying it up with some friends at Brock University,” says Brady’s mom, “the next morning he was in Niagara Falls, at his grandparent’s house as they were waking up.”