Anne Kingston: The trial showed once again that one woman's word is never enough. But shattering the facade of a man like Cosby is a momentous win 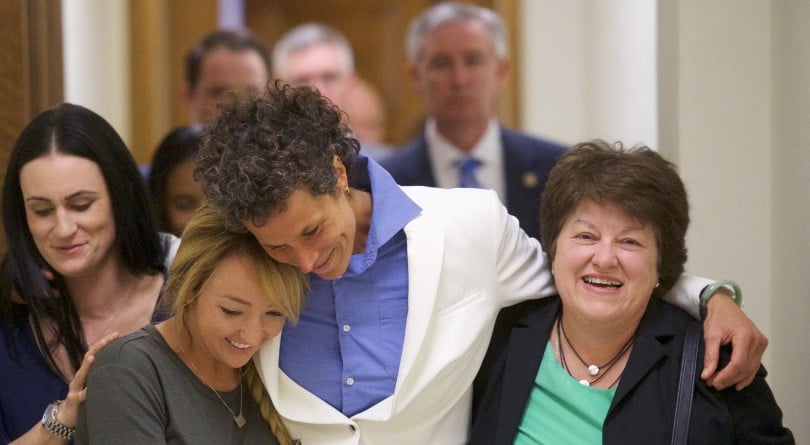 Bill Cosby accuser Andrea Constand (C) reacts with lawyer Dolores Troiani (R) and Delaney Henderson (L) after the guilty on all counts verdict was delivered in the sexual assault retrial at the Montgomery County Courthouse on April 26, 2018 in Norristown, Pennsylvania (Mark Makela/Getty Images)

The audible gasp reported in the Norristown, Pa. courtroom on Thursday when a jury found Bill Cosby guilty on three counts of aggravated indecent assault of Andrea Constand spoke volumes. Cosby, accused by more than 60 women of drugging and raping them over five decades, had long been convicted in the court of public opinion as a sexual predator, a man who drugged aspiring actresses with Quaaludes long before the prospect of assaulting them in his hotel room was a glimmer in Harvey Weinstein’s eye. As the gasp made clear, however, a sexual assault conviction in the court of law, particularly against a celebrity, is a far more difficult matter, particularly when the assault dates to 2004, as this one did, with no witnesses or forensic evidence. The threshold of “guilt beyond a reasonable doubt” is high, as seen in Cosby’s first trial last June, which ended in a deadlocked jury after almost 54 hours of deliberation.

It was a different picture on Thursday. A seven-man, five-women jury arrived at a guilty verdict on three counts in 14 hours in the first high-profile post-#MeToo sexual assault case. As such, it’s a precedent destined to be read like chicken entrails.

When it is, Constand, a Toronto native, needs to be recognized as a bold trailblazer—the first and only Cosby accuser to see criminal charges laid.  The former basketball player went to police in 2005 to report that Cosby, whom she befriended when she worked at his alma mater, Temple University, drugged and assaulted in his suburban Philadelphia home. It was an brave act given Cosby’s fame: he was then a beloved figure, known as Cliff Huxtable, “America’s Dad,” on The Cosby Show. Constand’s report emboldened dozens of other women to come forward. A myriad of factors, some political, meant criminal charges weren’t laid until 2015, just before Pennsylvania’s statute of limitations expired; in both the first trial and retrial, the now 80-year-old Cosby pleaded “not guilty” to all charges; he admitted to sexual activity with Constand, but said it was consensual.

READ MORE: Bill Cosby’s #MeToo-era retrial is off to a brutal start in the court of public opinion

Long before #MeToo, the charges against Cosby lead to removal of statutes of limitations on sexual assault cases in several states. The movement shadowed the retrial in subtle and not-so-subtle ways. Judge Steven O’Neill, who presided over the first trial, worked to keep #MeToo out of it, even when forced to address it head-on. During jury selection, he asked 120 potential jurors about their #MeToo bias. Only one person was not familiar with it.

Likewise, Cosby’s new defence team, headed by high-profile Los Angeles lawyer Thomas Mesereau, bemoaned the believe-the-accuser zeitgeist as “the current climate in America,” one that could make it harder for his client to get a fair trial. In retrospect, Mesereau, famed for acquittals of celebrities clients such as Michael Jackson and Mike Tyson on sexual assault-related charges, was a disastrous, tone-deaf choice in “the current climate in America.” (It didn’t help that Cosby smiled in an unsettling manner during Constand’s harrowing testimony.) Where Cosby’s defence team in the first trial portrayed the Cosby-Constand relationship in romantic terms, Mersereau took a different tack, painting the former basketball star as a villainous “gold digger,” a “pathological liar,” and “a con artist.” These descriptors are laughable to anyone who heard Constand’s earnest, credible testimony in trial one. The defence also presented a witness blocked in the first trial: Marguerite “Margo” Jackson, a former colleague of Constand’s at Temple University, who said Constand told her that she could fabricate an allegation about being drugged and raped by a celebrity and receive a lot of money. The jury then heard the entertainer paid Constand $3.38 million in a 2006 civil suit. The prosecution countered that the settlement was proof that Cosby wanted to hide his behaviour.

The Cosby trial, like the #MeToo movement itself, illustrated that one woman’s allegation is never enough. In the first trial, the prosecution asked to have 13 of Cosby’s accuser to testify at as “prior bad-acts” witnesses used to establish a pattern of behaviour.  The judge allowed only one—Kelly Johnson, who accused Cosby of drugging and assaulting her in 1996. The defence’s cross examination over her alleged drug use and her previous sexual partners was brutal and reduced her to tears.

A more defiant tone was apparent in the testimony of the five women permitted to testify in the retrial. All reiterated and reinforced Cosby’s pattern of behaviour: the offer to help with their careers; alone with him, they were drugged immobile; when they awoke, they discovered they’d been raped. The most stirring and heated testimony came from former supermodel Janice Dickinson, who reported the entertainer drugged and raped her in 1982. Dickinson engaged the court with anecdotes of partying at Studio 54 and having sex with actor Sylvester Stallone before describing in graphic terms the assault, while  glaring at Cosby, whom she called “a monster.” “It was gross,” she said, recounting Cosby’s cigar-breath and body odour and finding “America’s Dad on top of me.” Dickinson also refused to be bullied by Mesereau when he called her a “liar” for not mentioning the rape in her memoir. “I am not a liar. Don’t call me a liar,” she shot back. Such attacks by the defence were common. As   Jezebel described the misogynistic evisceration: “Every Woman Who Testified Is a Phony, Lying Slut Out for Money.”

The jury’s questions to the court during deliberations suggest they didn’t buy it but instead focused on information directly related to assault. Its first question Wednesday involved the legal definition of consent. The judge said he couldn’t answer outside of the definitions of the charges being considered. The jury returned to court to hear the judge read an hour-and-a-half’s worth of graphic testimony that included Cosby admitting to giving women Quaaludes recreationally, as well as disturbing details about his sexual contact with Constand. During the read-back, Messereau fell asleep. On Thursday morning, the jury asked to hear Jackson’s testimony. Clearly, the verdict indicates the “gold-digger” strategy was a fail. They believed Constand.

In reviewing the trial, one can’t ignore a statement made in closing arguments by assistant DA Stewart Ryan that marked the convergence of the court of public opinion and the court of law. Ryan told jurors that the good-will the rich and famous Cosby amassed in the court of public opinion enabled him for decades: “The defendant spent years, and years, building up his bank of trust and reputation, the prosecutor said. “He used it every single time he sexually assaulted a woman. He tried to use it with Andrea Constand. He’s trying to use it with you.”

RELATED: Bill Cosby’s retrial will be very different in a post-Weinstein world

On Thursday, that trust bank was officially emptied by no one other than Cosby himself. Post-verdict, the enfeebled facade Cosby affected for cameras vanished when District Attorney Kevin Steele asked the judge to revoke Cosby’s $1-million bail. Cosby was a flight risk, Steele said, because of his wealth and the fact he has a private plane. Furious, Cosby jumped up from his chair and shouted out in the third person: “He doesn’t have a plane, you asshole!”

What happens next will also be enshrined in post-#MeToo mythology. Cosby will be sentenced within 90 days. Under Pennsylvania state law, he faces up to 10 years in prison on each count, but could be given probation. He has been told not to leave his Pennsylvania home, and must be be fitted with a GPS tracking device. His lawyers plan to appeal. But it’s over for Bill Cosby. Andrea Constand and the women who testified on her behalf were believed in the court of law. It is a triumphant victory that came at an incalculable price. It also signals a new beginning.