Scott Feschuk on the start of the holiday shopping season and the end of civilizations. 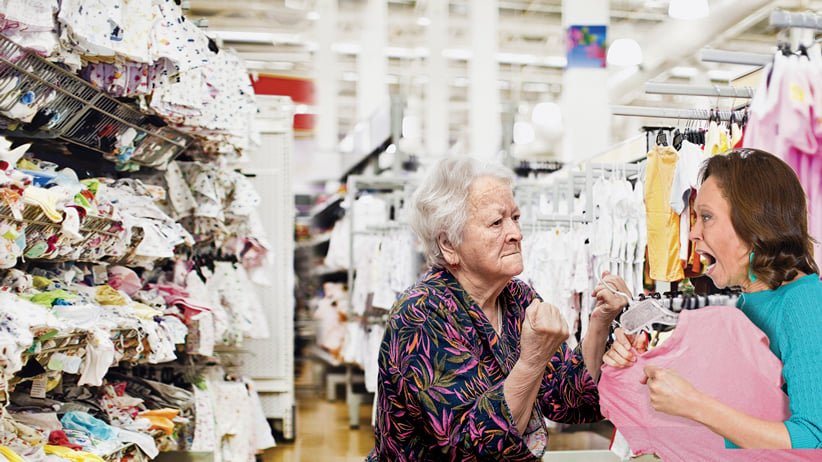 We’re closing in on Black Friday, which is fast becoming my favourite day of the year—not because I love the start of the holiday shopping season, but because I’m a sucker for the end of civilizations. I’m not sure how Rome ultimately fell, but odds are good the end came right around the time a swarm of thousands lined up at midnight to score 30 per cent off a second-rate toga.

Is there a more entertaining day on which to watch U.S. cable news? Every year, it keeps getting better. In 2013, a guy at a Target in Las Vegas got shot in the leg in a scuffle over a big-screen TV. At a Wal-Mart in Virginia, a man was knifed during a fight over a parking space. Late at night, one proud American tweeted the scene as he watched two people come to blows over a $14 blender. Welp, honey, it cost me two teeth and eight stitches but WE’RE GOING TO SMOOTHIE TOWN!

(We’re no better as Canadians; we have the sales, even though we don’t share the holiday. That’s like having dessert without having the meal, which actually sounds awesome and now I’ve changed my mind and think we’re geniuses for doing it this way.)

What can we expect from Black Friday this year? Better yet: Is there a way we can make requests? Can I ask for “Elderly grandmother fist fight over $8 pink nightgown” or “Two fat guys, one box of Lindor truffles?”

If a conflict happens, we’ll know about it. Every Black Friday brings a deluge of YouTube clips featuring wild stampedes, obscene gestures, violent melees and full-on donnybrooks. To the millions who endure sharp elbows and pulled hair in pursuit of a discount, the ending of A Christmas Carol must read like a tragedy. Whoa, that poor old man—his life was going so well and then he overpaid for a turkey.

There are so few things we can still make fun of people for these days. And the good news is: this is definitely one of them. We can definitely still make fun of the people who break down a department store’s doors to get at a bin overflowing with two-for-one slipper socks.

In fact, I’ve been trying to get my friends interested in a Black Friday fantasy draft. It would be just like fantasy baseball, but we’d select words or phrases—then amass points based on how often they’re uttered on CNN. For the first pick overall, it would be a tough call between “bargains” and “trampled.”

Not that I’m only about the carnage. I’m also here to help. Personally, I believe the key to surviving Black Friday without incident is the long-lost ability to improvise. You’ve made it through the doors. You’ve crawled over the bodies of the fallen. You’ve crossed the moat of human tears. And you approach the toy department or electronics boutique, only to find yet another throng clogging your path to bargains. Time to call an audible.

Take a look around: not many people here in the kitchenware department, are there? What kid wouldn’t want to wake up on Christmas morning to find a spatula under the tree? Spatulas have so many uses! Just toss that spatula in your shopping basket, head for the exit, wait in line 75 minutes at the checkout, die a little inside and, boom, you can cross little Jimmy off your list. Dude is going to be psyched about that spatula!

Alas, the sad news is that Black Friday is expanding at a rapid pace. Heck, it seems no one respects the sacred American tradition of forcing people to camp outside all night to score a $40 DVD player anymore.

Instead, consumers are being bombarded with flyers for Black Friday Week specials and Pre-Black Friday sales. Wal-Mart is touting what it describes the New Black Friday. Its stores will open at 6 p.m. on Thursday night—Thanksgiving itself!—and continue to offer an array of specials, deals and bleak anecdotes attesting to our insatiable materialism well into Monday evening. Best Buy will open an hour earlier. Black Friday itself will continue to be diminished. Then, one day, Middle America will hear about the Internet and our fun will be over for good.

For now, however, Americans are quite literally forced to choose between the traditional dinner of family togetherness and that trunk load of $2 bath towels. Or perhaps there’s a solution to be found. Listen closely on Thanksgiving Day and you may hear the voices ringing out in homes across the country: It’s almost 9:30 a.m., y’all; finish eating your breakfast turkey and let’s get to the mall!