Blackhawks win Stanley Cup: 'The greatest feeling in the world' 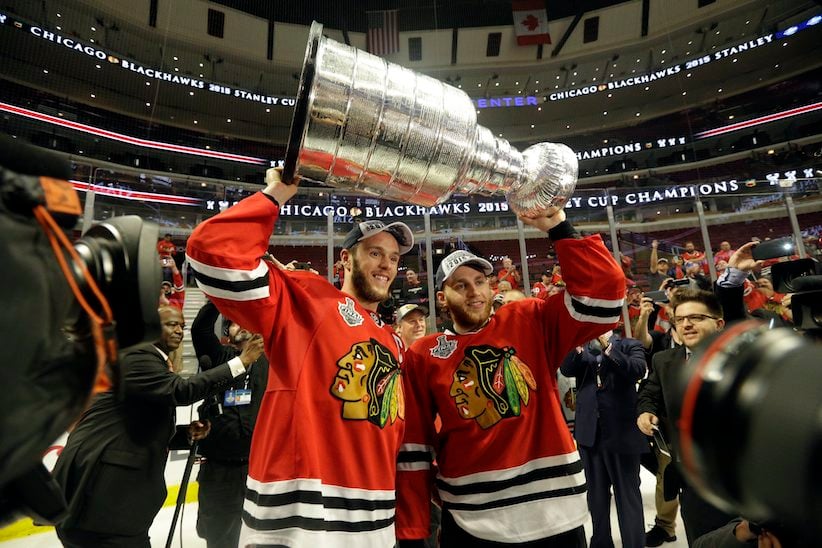 CHICAGO — A puck off the edge of a stick blade, another off the cross-bar. That was the difference between winning and losing when the margin of error was almost non-existent.

After playing on a tightrope for two weeks, the dam finally broke as the Chicago Blackhawks beat the Tampa Bay Lightning 2-0 in Game 6 on Monday night to win one of the tightest Stanley Cup final series in NHL history and capture their third title in the past six years.

To star winger Patrick Kane, this was even sweeter than his first Cup in 2010 and 2013 after a lockout-shortened regular season.

“It seems like it was the hardest one,” Kane said. “We’ve been around once or twice so we know what to expect but we really enjoy these moments and these situations.

“Who knows how many of these opportunities come along? You always want to take advantage.”

The Blackhawks lifted the Cup at United Center for the first time. They had to wait, however, as the trophy was delayed by weather and needed a police escort to the arena. Chicago had not won on home ice since 1938 and hadn’t actually gotten the Cup there since 1934.

“We wanted it for each other, for the city,” captain Jonathan Toews said. “Winning a championship like this in your own city in some ways transcends the sport. Everyone wants to be a part of it.”

Fans didn’t leave for more than an hour after Toews lifted the Cup and handed it to 40-year-old Kimmo Timonen, who got to retire on top. They sang to “Sweet Caroline,” some banged on the glass and most simply didn’t want to leave.

“Full building from when we had the Cup out here,” forward Brandon Saad said. “It’s going to be a hell of a city to win it in. Looking forward to the parade.”

Conn Smythe trophy winner Duncan Keith scored the clincher on one of the best individual efforts of the playoffs, and Kane provided the exclamation point with a third-period goal. Keith was the unanimous Conn Smythe choice.

“Best D-man by far,” said Marian Hossa, who along with Keith is one of seven Blackhawks to be a part of all three championship teams. “He’s proved that over time. In this playoff he was unstoppable.”

In the final, Keith and crew got major help from goaltender Corey Crawford, who stopped 151 of the 161 shots he faced, including all 25 in Game 6. He outduelled Tampa Bay counterpart Ben Bishop, who was struggling with a groin tear suffered in Game 2.

The Lightning were banged up throughout the lineup, but that was little consolation in defeat.

“We came here to win this and we didn’t,” said captain Steven Stamkos, who did not score in the final. “Right now, it feels like we didn’t get the job done.”

Tampa Bay can feel good about not being far off. Until Kane scored with 5:14 left Monday night, the Lightning and Blackhawks were either tied or one goal apart for the entire series.

“Think it easily could have been us on the ice celebrating,” Bishop said.

A Game 7 is the only thing that could have made this series more historic. Each of the first five games was decided by one goal for the first time since 1951.

As the series turned into a battle of wills, Tampa Bay put forth its final burst of desperation facing elimination. But with several players dealing with noticeable injuries, the Lightning didn’t have enough to push back against the playoff-tested and healthier Blackhawks.

“At this point I think maybe it was just a little bit of the experience that kind of weighed over,” defenceman Johnny Oduya said. “Somehow when we play the right way, it’s tough to beat us in seven games.”

It was the first for Timonen.

“I’m relieved, I’m happy,” the Finnish defenceman said. “I came back just to get one more chance. You can always dream about this, but you never know what can happen in hockey.”

The Blackhawks showed anything can happen, even in the salary-cap era. Fans counted down the seconds to the final buzzer, “Chelsea Dagger” again played over the loudspeakers and players and fans revelled to the sound of “Sweet Home Chicago.”

“Once you do it once, you can’t wait to do it again,” coach Joel Quenneville said. “It’s the greatest feeling in the world.”

The Cup was delayed getting to the building because of weather, but when it reached the ice commissioner Gary Bettman got to congratulate the Blackhawks on one more.