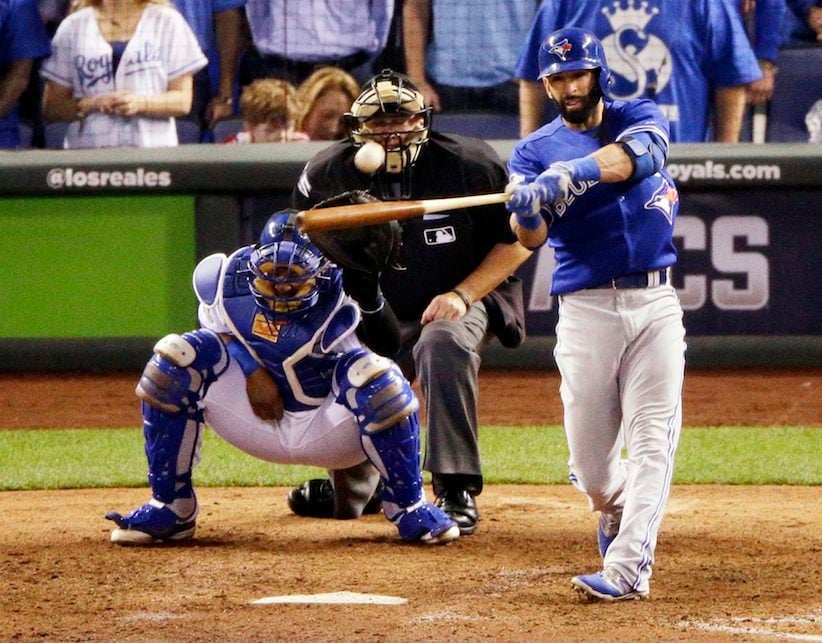 KANSAS, Mo. — In the end, the Blue Jays ran out of playoff lives.

Jose Bautista’s heroics apart, the Toronto bats went quiet Friday night and Kansas City closer Wade Davis outduelled 20-year-old Roberto Osuna in the final act of a tense 4-3 win that knocked the Jays out of the playoffs as the Royals won the American League Championship Series four games to two.

The Blue Jays’ return to the post-season after a 22-year absence has had a bit of everything and it was no different on this night.

There was controversy, one comeback after another — not to mention a late rain delay — in a nail-biter that went down to the wire.

It was Toronto’s fifth must-win game of the playoffs and it proved to be one too many for the AL East champions, ending a remarkable season that saw the Jays reload at the trade deadline and dominate after the all-star break.

But they could not dethrone the Royals, who ultimately won with timely hitting from a deep, diverse offence and a better bullpen.

Kansas City shortstop Alcides Escobar was unanimously selected the ALCS MVP. He hit .423 with five RBI during the series.

Kansas City claimed its second straight AL pennant — and the fourth in franchise history — while earning a date with the waiting New York Mets in the World Series. The Royals lost the Series in seven games to San Francisco last year.

The Royals will open the Series at home Tuesday.

A disappointed John Gibbons took solace in the fact his team went down fighting.

“I knew we would, as far as fighting to the end, because that’s what we do. That’s who these guys are,” said the Toronto manager. “We were sitting in that position, we just couldn’t get it done. Wade Davis stepped up, like he’s done the last few years.

“They did, they made a run at it. And I couldn’t be more proud of a group of guys. They laid it out every day, great competitors. It doesn’t matter what the score, they show up to play every day. And a fun bunch, fun group to be around every day. And I tip my hat to them.”

One stat stood out after the game. The Jays were 0-for-12 Friday with runners in scoring position.

“I was able to come through twice but unfortunately it wasn’t enough,” said Bautista. “It’s a sour loss. But we had enough opportunities to do more but we didn’t so they deserve to win.”

Bautista was a one-man wrecking crew for Toronto, driving in all three runs with a pair of homers included a two-run shot in the eighth inning that tied it at 3-3 when the Jays were down to their last five outs.

But the Royals answered with a run to end Toronto’s season and then held off the Jays in a dramatic ninth.

There was drama aplenty before a jacked-up Kauffman Stadium crowd of 40,494, including a 45-minute rain delay midway through the eighth.

“It wasn’t quite an hour, but it felt like it was four hours,” said Royals manager Ned Yost.

When the game resumed, Osuna was on the mound. The 20-year-old phenom had been lights out most of the season but he walked Lorenzo Cain, who came home on Eric Hosmer’s ensuing single for a 4-3 lead. Kendrys Morales singled to put men on first and second.

A double play ended the inning but the damage was done. Hosmer’s 23rd post-season RBI tied George Brett for the Royals’ record.

Russell Martin singled off Davis, who had come in with one out in the eighth, to open the ninth. Dalton Pompey came on as a pinch-runner and promptly stole second and then third.

Kevin Pillar worked an eight-pitch walk and stole second, removing the double play opportunity as pinch-hitter Dioner Navarro struck out. Davis then struck out Ben Revere, leaving MVP candidate Josh Donaldson as the Jays’ final out and Bautista on deck.

Donaldson, 0 for 5 on the night, grounded out to third in a tense at-bat to end the evening, leaving men on second and third.

Davis spent the rain delay with a heat pack on his arm and shoulder, spending time on an exercise bike and playing catch.

“I kept checking with him. ‘How do you feel, how do you feel?” said Yost. “He said, ‘I’m all right. I’m OK. But you get to 45 minutes and it gets a little nerve-wracking there.”

Ben Zobrist and Mike Moustakas homered for Kansas City. The Royals added an insurance run in the seventh.

His three-run homer in the seventh inning of Game 5 — marked with a signature bat flip — proved to be the difference as the Jays defeated the Texas Rangers 6-3 to win the series.

Bautista did his best to channel Carter this night.

There was no bat flip this time. He gently dropped the bat, with more work left to do.

The Royals had seemed in control, up 3-1 and with its much-vaunted bullpen up and running.

FOX certainly through so. The broadcaster flashed a graphic during the seventh inning that pre-emptively advertised the Royals playing the Mets on Tuesday in Game 1 of the World Series. The graphic pictured Kansas City’s Hosmer and New York’s Daniel Murphy on opposite sides, with the time of the game in between them.

But Revere singled off Ryan Madson to open the eighth and, after Donaldson struck out, Bautista sent the ball deep to left.

It was Bautista’s fourth homer of the playoffs, setting a franchise single post-season record. He also set a record with the first multiple home run game in Jays’ playoff history and tied a franchise mark with an RBI in four straight post-season games.

Price settled down as the game wore on, putting in a fine shift only to get limited help from his offence.

“I hope that quiets some things down for David, you know what he’s been through this post-season,” Gibbons said. “And like I said before, he’s having a great career, he’s going to go on to have an even better career, and he stepped up tonight, he really did.

“A couple solo home runs early and then he was really as good as we’ve seen him. And he kept it right there, gave us a shot. Jose had a huge night too.”

Price, who had lost seven straight as a post-season starter, gave up three runs on five hits and struck out eight in a 99-pitch outing. He walked two and left trailing 3-1 but ultimately left with a no decision.

“I’ve thrown the ball many times well in the playoffs. I threw it OK tonight,” said Price, who is headed to free agency. “I know I didn’t get a win and we didn’t win. What happens in October does not define who I am.”

Aaron Sanchez came in for Price with one on and two outs in the seventh. No. 9 hitter Alex Rios greeted him by singling Moustakas home for an insurance run that made it 3-1.

The Jays had refused to quit after falling behind 0-2 in both the ALDS, against Texas, and the ALCS. They won three straight to oust the Rangers in the best-of-five ALDS and then Game 5 against the Royals to cut the deficit to 3-2 in the best-of-seven series.

Toronto won the first four must-win games by a combined score of 26-9. The Jays were outscored 44-23 in the other six contests, going 1-5.

Ventura went 5 1/3 solid innings, exiting after an Edwin Encarnacion one-out double. The 24-year-old Dominican right-hander, who bristled all evening, pointed to the sky as he left the mound to an ovation following a four-hit, 77-pitch outing. He struck out five and walked two

Kelvin Herrera cleaned up the sixth inning, striking out Chris Colabello with a 100 m.p.h. fastball and getting Troy Tulowitzki to fly out.

Ventura was dialled in early. He threw 20 pitches in the first inning, with 17 strikes.

Revere hit Ventura’s third delivery into right field for a double but the Royals starter retired the next 10 Jays.

The Jays asked for a review of the play, arguing that the fan who caught the ball had reached into the field of play with his glove, making it a fan interference double. But the video review confirmed the Moustakas home run.

The Kansas City Star reported Humphreys did not think he had reached into the field of play to snag the ball. But he admitted “I was praying” during the video review.

A celebration of the season