Canada’s most decorated Winter Paralympian discusses losing his vision, racing with a guide—and the crowds in Sochi 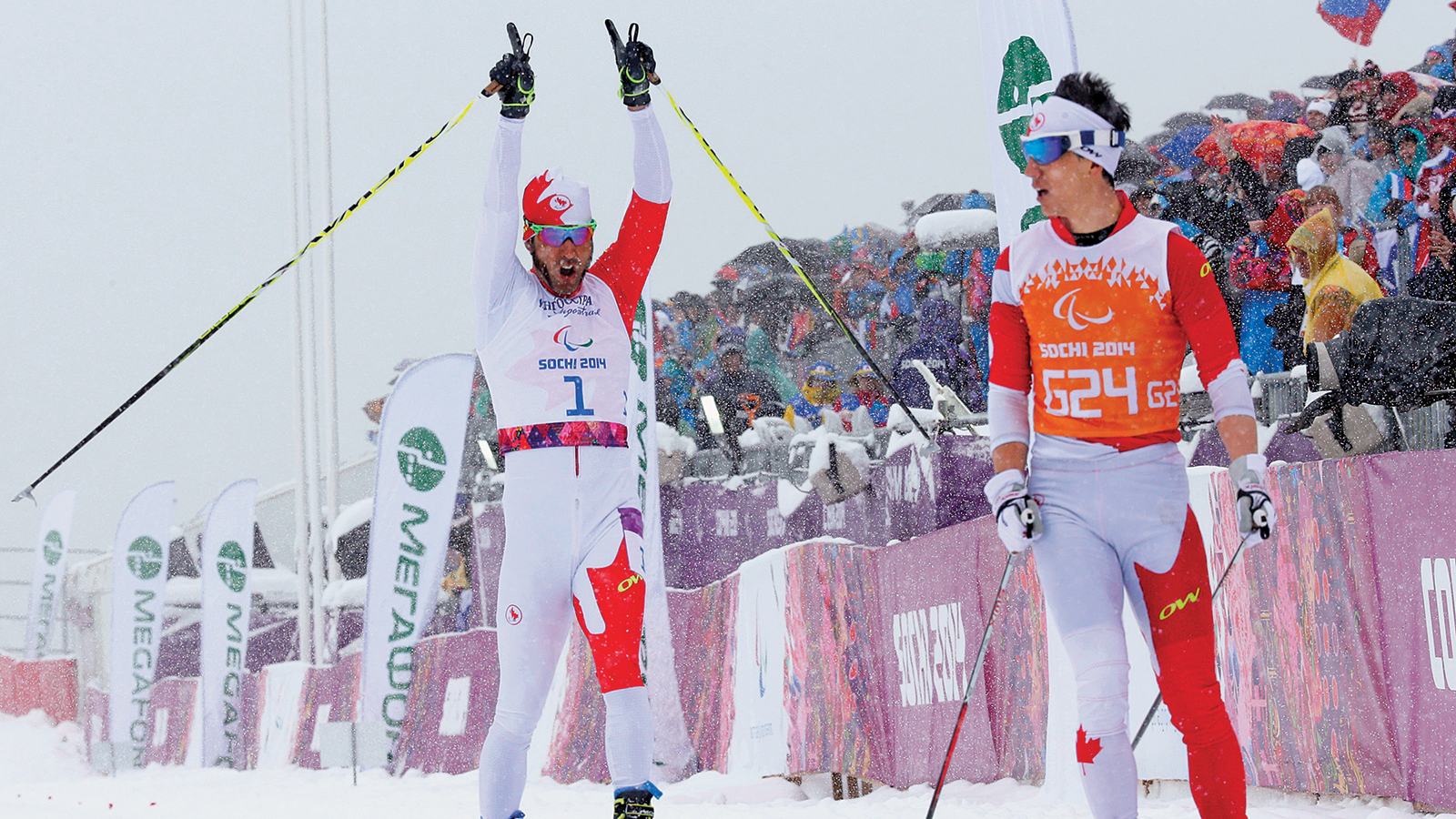 Sixteen years ago, Brian McKeever was a teenager with dreams of cross-country skiing in the Olympic Games. Then he was diagnosed with Stargardt disease, a hereditary form of macular degeneration causing him to lose most of his vision. McKeever didn’t stop skiing, though. Coming home from Sochi this week with three gold medals in cross-country, the 34-year-old is the most decorated Winter Paralympian in Canadian history, with 10 career gold medals.

Q: How old were you when you were diagnosed with Stargardt disease? What was it like?

A: I was about 18. In 1998, [my brother] Robin and his wife both qualified for the Olympic Games and I qualified for the world championships. It was just a great year. I hadn’t even noticed I was losing my eyesight until a couple of weird things happened, like giant billboard signs weren’t making any sense to me anymore. Parts of the large words were getting hit by blind spots, so I would see T’s as being I’s. [One day] we were trying to find the address for this end-of-year gathering for all of our friends and family. I couldn’t even see the street signs, let alone anything written on them. And they were reading street signs two blocks away. We started talking about it. At that point, we hoped it was just mom’s bad eye—astigmatism or something like that; she wore glasses her whole life.

We went in and had it checked out and the doctor said, “It’s really strange, I can’t get your eyes any better with lenses.” I knew exactly what it was because of my dad and my aunt. [Both have Stargardt.] I was referred to an ophthalmologist and we did some blood tests and realized I was the carrier for the same dominant gene.

A: It was a rough couple of weeks. I was kind of embarrassed about it and I was crying a lot. There was a period of grieving and then I quickly realized I could look to my dad and my aunt as examples. He went to university and played on a bunch of sports teams. He was a teacher at an elementary school for more than 30 years. It was kind of normal in our family. It was like: “Okay, dad doesn’t drive, he rides his bike everywhere.” I remember once taking two bicycles to the hardware store [with dad] to bring home two big sheets of drywall. We stuck them on the pedals and walked the bikes home. That was the way he would do things. So having that example I realized it wasn’t going to affect me all that much. I lived my life the way my dad had lived his. It wasn’t as big of a deal as the initial knee-jerk reaction may have seemed.

Q: How much do you see now?

A: Somewhere between five and 10 per cent, I would say. I have a blind spot in the middle. My peripheral vision is basically undamaged.

Q: You mentioned your brother, Robin, who was your guide in previous Paralympic Games and is now your coach. How has your relationship evolved since your initial diagnosis?

A: He was the most bummed for me. He had come back from the Olympics, had one of the best times in his life, and was feeling bad that maybe I wouldn’t have those kinds of experiences. He didn’t qualify for the Olympics in 2002. That’s when he started coming over to the Para side to guide me, and we qualified for the Paralympics in 2002. We went there together and he was so pumped. He said: “It’s the same feeling as when I’m at the Olympics.” And there we were sharing it together. When we were growing up, we weren’t really close because he was six years older. It was through our working together on the Paralympic side that brought us close and now we’re best friends.

Q: Now that Robin is your coach, how do you decide on a person to be your guide?

A: It’s actually really difficult to find somebody that’s fast enough. There are only a handful of people in the country that have the ability to stay in front of me. With Robin, I was fortunate because he’s family. But when you’re trying to ask fellow competitors to maybe give up aspirations in their own careers to come and help you out, that’s very difficult. I feel very fortunate that Erik Carleton and Graham Nishikawa are willing to come out, travel all over the world and support a little blind guy in his quest to be the best skier he can be.

Q: What’s it like to be dependent on a guide if he gets sick or injured?

A: It’s very tough and that’s why we have two. In the past with Robin, if he was sick I was skiing on my own. While I’m comfortable doing that, it’s not always the fastest way. We rely on that relationship as a team to ski as fast as possible. In this case, the three of us have trained together really well. It was about trying to be as good as we could be [individually] and pushing each other, knowing that would carry over to the Paralympics. Both Erik and Graham have shared the workloads guiding, and we came away with three golds together, so it’s quite an amazing experience.

Q: What’s the strategy with the two-guide system?

A: In the longer races, it’s so much more difficult for a guide to sit out in front, being in the wind, setting the track—the one in the back gets to draft. In the past, if whoever was guiding me got a little tired, I could ski a little bit on my own and the guide could shortcut, but in this case, I was never on my own because there was always someone ready to step in and switch back and forth.

Q: How does the strategy work with a guide?

A: It’s all about pacing. The guide looks over his shoulder to see if I’m dropping off. I sit there as close as possible to the person guiding me because the tighter you are, the more draft you get and the less energy I’m using. We do this all the time in able-bodied racing. But in this case if they start to get away I’m asking them to slow down so we maintain that tight gap.

Q: You had a lot of close races in Sochi, but during the 1-km sprint, you fell near the start. What was going through your mind when you fell?

A: There were a few F-bombs thrown around. I got up really quick. I was worried about broken equipment. When you’re holding a little carbon-fibre ski pole, it doesn’t take much to snap those. In this case, I got kicked and stepped on. I was just lucky that the pole didn’t break so we were able to just get back into racing rhythm right away. I knew we had a chance. They weren’t more than a few seconds in front of us. We quickly realized the technicians did such a great job on the skis when we were catching up on the downhill. By the time we came around the last downhill, we’d made contact with our biggest competitors and had gone straight ahead of them. It happened really fast, but I think we were calm in how we raced, not panicking and still skiing hard.

Q: Going back four years, you qualified for the Vancouver Games but a coach’s decision meant you couldn’t race. How did that affect you?

A: It took me about two years to get over that. It was a huge psychological blow. I wasn’t as motivated to keep going. Fortunately, I rediscovered the fun of it. The last two years have been solid training. We had a purpose.

Q: Your first Paralympics were in 2002. How have the Paralympic Games evolved since then?

A: Vancouver was a huge turning point for Canadian Paralympics. They did a great job of marketing them as a single Games—Olympics and Paralympics together. It really spoke to Canadians in that sense. People started to watch it. With that exposure, people realized that it’s really high-level competition. They start to cheer on their Canadian team the way they supported the Olympics. That was fantastic. The more people who get educated in what the Parlympic Games are, the more fans we have, the more exposure there is, and the more support these athletes get moving forward. That’s a big change from 2002. The Paralympics were kind of a sideshow to the Olympics and I don’t believe that that’s the case anymore.

Q: What was the fan support like in Sochi?

A: They filled the stands every day. It’s a lot of kids with school programs, which I think is great. It exposes young kids to athletes with a disability and they quickly see that just because someone is in a wheelchair, it doesn’t mean that person is any less of a human being. They quickly see beyond the disability to the athlete and the performance. In this case, it was not just schoolkids. It was everybody. They packed the stands. They were super loud, supporting everybody.

Q: What do you have planned for the future?

A: We were supposed to go support our national championships. I’ve just changed my plane ticket to go straight home because I’m out of gas. Sometimes you have to know when to pull the plug on a season. I’m not necessarily ready to pull the plug on a career. I feel that athletes live in four-year chunks. I’m not going to commit for one year without committing for four. My body is starting to break down. The pounding is taking its toll. But I’m still having fun and I’m going to let that be my guide.

Q: For aspiring Paralympians, how can you describe the feeling of the Games?

A: It’s a fantastic feeling. It’s the pinnacle of para-sport and it’s whatever they aspire to achieve. It’s very liberating as an athlete with a disability to see that there are no limits to the level of performance.