'NASCAR and bagpipes — that was my dad' 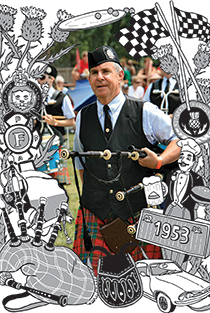 Bruce Jones was born in Hamilton on March 26, 1951, the third of six children. His father, Frank, made tires for Firestone, while his mother, Thelma, sewed doll clothes out of their home. Bruce was a shy child who loved race cars and despised eating peas. At the dinner table, he’d slide them off his plate to feed their dog, Sloopy.

The family grew up in a proud Scottish home. When Bruce was six, he picked up his first set of bagpipes. At nine, he joined his first pipe band. Twice a week, he’d take the bus to practise with his younger brother, Brian, who played the drums. Dressed up in a kilt and a sporran, he would perform at local music festivals alongside his sisters Judy, Wendy, Debbie and Gayle—all Highland dancers. “I remember people opening their doors thinking we were a parade as we walked to the bus stop,” Debbie says.

In 1964, Bruce and his brother took a trip with the Boy Scouts to Utica, N.Y. “Everywhere we went, we’d stop, get out the pipes and drums, and play for anyone who would listen,” Brian says. At Utica’s convention centre, Bruce played live for a local radio station. Three years later, he joined the militia band of the Argyll and Sutherland Highlanders of Canada.

Bruce’s other passion was cars. He subscribed to auto magazines and frequently watched races at the local track. “When we went for walks, he’d walk past a car and say something about it—as if it were a person,” Brian says.

In 1969, he visited the Millionaire Drive Inn, a local burger joint where his sisters worked as carhops. There, he caught the eye of another employee: Sheila Mullin. Sheila said to one of Bruce’s sisters: “Oh, is that your boyfriend? He’s really cute.” And the sister responded: “Eww. No. That’s my brother.” Pretty soon, Bruce and Sheila had their first date—a double date at the drive-in, where they sat in the back of his sister Debbie’s boyfriend’s Chevy Corvair. The two dated for the rest of high school and were married in 1971.

Eight years later, they had a daughter, Erin. Bruce would take his young, pigtailed girl to races or to visit antique-car shows. When Erin followed the family tradition of Highland dancing, Bruce took her to all her lessons—even though all the other parents there were women. “He was the dance mom,” Erin says with a laugh.

They’d take road trips, stopping in old towns and walking through cemeteries to look at headstones. Bruce, who read history books in his spare time, taught Erin about the early settlers of the region. Fatherhood didn’t stop him from playing the bagpipes. He travelled with the Argylls to the U.S., Scotland, Bermuda and Germany. He even played for the Queen during a royal visit to Canada in the 1980s.

Bruce worked as a produce manager at the grocery store Steinberg’s, but went back to school in the mid-1990s for a business administration degree in automotive marketing at Georgian College in Barrie, Ont. The marriage suffered. He and Sheila split up in 1996. Hurt from the divorce, Bruce accepted an opportunity to finish his final year in Fort Worth, Texas, and opted to stay. He found work as a car salesman, bought a season pass for Texas Motor Speedway and joined a pipe band. “NASCAR and bagpipes—that was my dad,” Erin says.

In January 2005, Bruce moved back to Hamilton at Erin’s request, but lost his job as a car salesman that fall. Weeks later, Sheila became seriously ill with lung cancer. Even though she had remarried, Bruce never left her bedside until she died soon after in hospital.

In 2006, Bruce moved to London, Ont., where he joined the London Fire Fighters Pipe Band. “He would always show up for parades—no matter how cold it was or how hot it was,” says Jim Scott, the band’s pipe major, who had known Bruce since childhood. “Bruce would never complain. He’d just smile and wink at you.”

By the time Erin married in 2012, Bruce already had a close relationship with his son-in-law, Marcus Becker. Together, they would go on car rides to chat about politics. Bruce was also “grandpa” to the pair’s shih tzus, and kept framed photos of one atop his TV.

On Aug. 3, 2013, Bruce performed at the Glengarry Highland Games in Maxville, Ont. Afterward, a normally modest Bruce went up to his pipe major. “He said, ‘Jim, I think that is the very best I have ever played,’ ” Scott recalls. Moments later, Bruce started to feel unwell. He made it to the paramedic’s table before he collapsed and died of a heart attack. He was 62.