The sad death of a dog named Bust 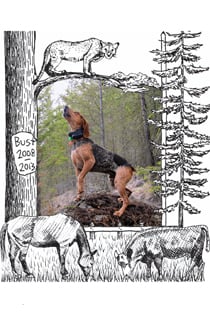 Bust, as he came to be known, was born in 2008 in the mountainous town of Payson, Ariz., home of the “World’s Oldest Continuous Rodeo.” (First held in 1884, it has been an annual tradition ever since.) Like many hounds in the heart of Arizona, Bust was a dry ground tracking dog, trained to sniff out mountain lions lurking in the rocky hills and thick pines that surrounded his ranch. If a lion came too close, stalking a horse or attacking a cow, it was Bust’s job to pick up the scent and chase it down. Rarely did his nose fail.

By the time Bust was born, Kevin Van Damme had spent nearly two decades investigating similar cougar sightings across British Columbia, 2,700 km north of Payson. (Mountain lions and cougars are the same animal, despite the different names.) A veteran of B.C.’s Conservation Officer Service, Van Damme took it upon himself—and his family’s bank accounts—to train and house many of the service’s tracking dogs; they worked for the public, but belonged to him. “I think Kevin is half hound himself, truly,” says Ken Owens, a longtime colleague. “He lives and breathes this stuff, and that’s why the dogs work so well with him.”

In the years before Bust was born, Van Damme’s hounds responded to at least 300 “cougar conflict” calls, from close encounters to full-blown attacks. “If it’s a serious risk to public safety, we’re tracking down the animal to euthanize it,” he says. “When a dog gets close, when the scent of the cougar gets stronger, he will ‘open up.’ It’s not really a bark, but a bay. He’s basically telling the cougar: ‘Hey, I’m coming.’ ” Once cornered, most cougars instinctively climb a tree—an easy shot with a rifle. (A cougar that preys on pets or gets close to humans cannot be tranquilized and relocated because it will inevitably return, Owens says. “These are the tough decisions we have to make every day.”)

Van Damme’s most talented four-legged partner, without question, was a relentless hound named Buster. “He was amazing,” Van Damme says. “He really gave me a reputation as someone who is able to be successful, but it was never my doing. It was always the skill and ability of the dog.” When Buster died of old age in 2009, Van Damme had already started lobbying his superiors to cover the increasing cost of the tracking dogs, and by 2013 the service approved the idea on a trial basis, agreeing to purchase two elite, heavily trained hounds for $8,000 each. Bust was five years old when he arrived from Arizona last March, along with another dog named Link.

The size of a border collie, Bust weighed 50 lb. and stood 65 cm at the shoulders. But his original name wasn’t actually Bust. Van Damme will not say what it was, except that it wasn’t quite appropriate for a public-service hound. “After I watched him on his first chase, I realized he was deserving of what I believed to be my best dog,” he says. “But I couldn’t go all the way to Buster, so I gave him the name Bust. He was right behind the strongest dog I’ve ever had.”

Bust lived in Kamloops with Van Damme’s family (his wife, Coleen, and their sons Brock, 17; Cole, 14; and Reid, 12). “Typically, if one of my kids takes one of the dogs for a walk, they get dragged around the street,” he says. “These dogs are very powerful, they’re very focused, and they’re always tracking, but Bust was a little more respectful. He took it easy on them.”

Cougars, though, were not so fortunate. Let Bust loose, and his target inevitably ended up in a tree. “In the short period of time Kevin had that dog, he had it working to such a high level that I’d never seen before,” Owens says. “Every cat track we got on led to a cat in a tree.” Once, after a man on a horse was almost attacked near Vernon, it took Bust and his nose less than two hours to find the culprit.

Three days after Christmas, Van Damme, Bust and another hound named Boomer were dispatched to a call outside Kamloops, where a wounded, bloody cougar was preying on pets. Van Damme didn’t know it at the time, but one of the cat’s front paws had become entangled in a snare, leaving it torn and swollen. When the dogs eventually homed in on the cat, it was too injured to climb a tree. Instead, it turned and lashed out, pinning Bust’s head to the ground and taking a giant bite of his head.

Van Damme managed to fire a single shot at the cougar—enough to kill it—before rushing Bust to the closest animal hospital. He survived the 40-minute drive, but his brain injury was simply too severe. He had to be euthanized.