Call her Eugenie: Bouchard falls short against her white whale

In Maria Sharapova, Eugenie Bouchard saw what her future could hold. But it wasn't meant to be at the 2015 Australian Open. 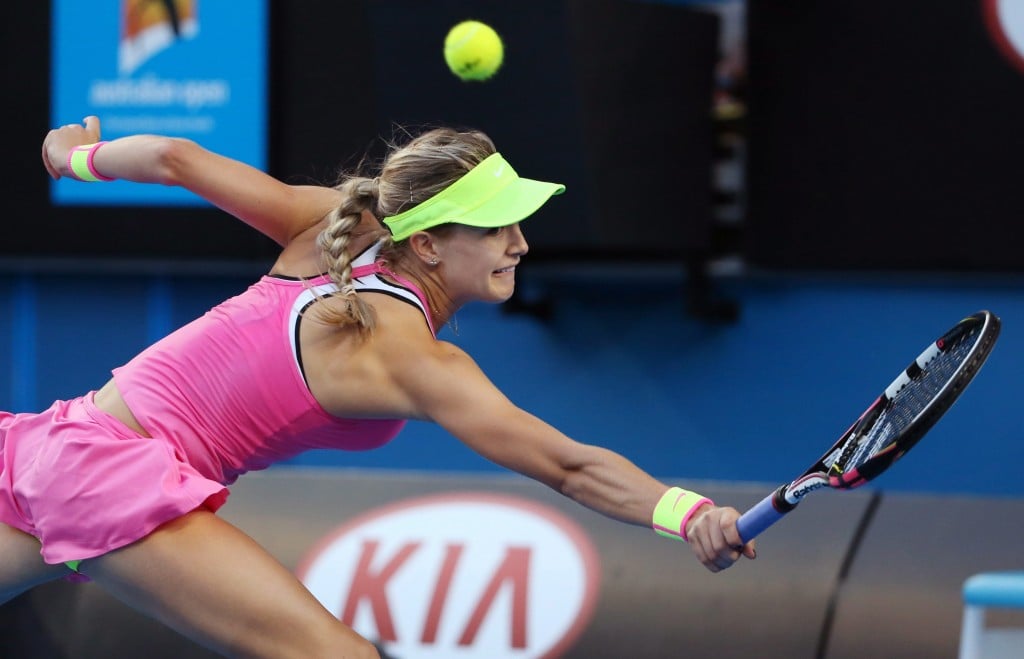 For the fourth straight match-up, Canadian tennis star Eugenie Bouchard couldn’t overcome her former role model, Maria Sharapova, falling in straight sets at the quarterfinals of the Australian Open. Dave Zarum from Sportsnet files this column. Head to Sportsnet for the latest sports coverage, including continued coverage of Milos Raonic’s advance in the tournament.

For a fleeting moment there, it looked like Eugenie Bouchard might just make a match of it.

After a shaky start to Monday night’s Australian Open quarter-finals against Maria Sharapova, it wasn’t until the 20 year-old from Westmount, QC was down 4-2 in the opening set when she finally seemed to find stability in her ground game.

She held her position on the baseline and fought her more experienced foe from there, unleashing a deep and powerful backhand to help take the game and bring the set to within one. On her way to the sideline, Bouchard smashed a spare ball onto the court for good measure.

Bouchard, the no. 7 seed who entered the contest having never beaten Sharapova in three prior tries, seemed to have finally twirled the momentum in her favour.

Then, after the changeover, Sharapova stepped onto the court, took her sweet time preparing to serve, tossed the ball into the air, and put the ball back in play.

And, just as fast as it appeared, the moment was gone.

Sharapova was simply dominant on Monday night, winning in straight sets 6-3, 6-2, as an onslaught of deep, weighted forehands from the 5-time Grand Slam winner proved too much for Bouchard to overcome.

“We knew what to expect facing Maria, says Canada’s FedCup captain Sylvain Bruneau, over the phone from the Rod Laver arena moments after the match, “[but] this was probably as good as I’ve seen her play. Once she got out in front, she never looked back.”

And as for Bouchard?

“She’s quite disappointed,” Bruneau says of the rising star, who would have reached her second consecutive Australian Open semis with a win. “Genie didn’t have the start she wanted and knows she can play better.”

Still watching the two compete against one another, it’s hard to ignore the shared DNA in their playing styles; at times it seemed like Bouchard was looking across the court at the kind of player she can soon be.

Sharapova, who appeared vulnerable earlier in the tournament (she overcame two match points in the second round) has played much more freely over her last couple of matches, and her unrelenting baseline game has shone as a result.

There may not be a wealth of weapons at Sharapova’s disposal like others she’ll one day be compared to, but she has a keen understanding of what allows her to excel. Her ground game is top of the class, punctuated by her force and assertiveness in controlling the ball early, allowing her seamlessly transition from defense to offense while suffocating her opponents in the process.

And though Bouchard may be a better defensive player overall, those are the same attributes that has, over the past year, helped launch Bouchard firmly into the conversation as a perennial Slam contender.

“There are similarities for sure,” says Bruneau. “They’re both aggressive and hit the ball with quality and move it around the court. And, of course, they are both fierce competitors.”

But as much as you see those similarities, the differences remain just as clear.

Unlike their last meeting, a three-set thriller in the French Open semi-finals, this one wasn’t even close, as Bouchard failed to capitalize on her few chances against the world’s no.2 ranked player.

Facing set-point in the first frame, Bouchard got caught Sharapova off-balance at one point, leaving the forehand side of the court open, but an over-aggressive Bouchard powered the ball in the middle of the doubles alley and out.

In the second set, down 3-1 but leading the fifth game 30-love, she couldn’t finish off Sharapova, allowing her to come back before forcing the game-losing shot into the net. It was one of 30 unforced errors from Bouchard.

In turn, as the match progressed and Sharapova’s shrills grew louder and louder, Bouchard’s shoulders sagged, her head falling after seemingly each missed opportunity.

To a degree, her matches against Sharapova encapsulate the story of Bouchard’s career—clear, tangible progression since joining the tour full-time two years ago. Heading into Monday’s match the gap between the two seemed smaller than ever, that Bouchard conceivably had a real shot at besting an icon of this era of women’s tennis. But frankly on Monday that notion was sent down the trash chute early into the second set.

That falling short is a major disappointment for Bouchard tells you as much about her unyielding confidence as it does about just how far she’s come on the ATP Tour.

And how much farther she still has to go.

One of the interesting things about being a professional athlete is that, time and again, it provides tangible measuring sticks in a way that many career paths can’t. Sharapova is one of Bouchard’s measuring sticks (rocket science it is decidedly not).

It offers a tidy narrative: the fiery competitor who, time and again, can’t quite yet overcome a fearsome obstacle. Bouchard is Ahab! Sharapova’s the whale! It practically writes itself.

Except, Bouchard’s camp isn’t buying it.

For now, Bouchard will regroup and re-evaluate her schedule. She’s entered in an upcoming tournament in Belgium, but is weighing whether or not to play for Canada at the FedCup in February, with a decision likely made within the next couple of days.

And after that? It’s back out to the sea. Back to harpooning that whale, whoever it may be.