Can a dead king put Leicester on the tourist map? 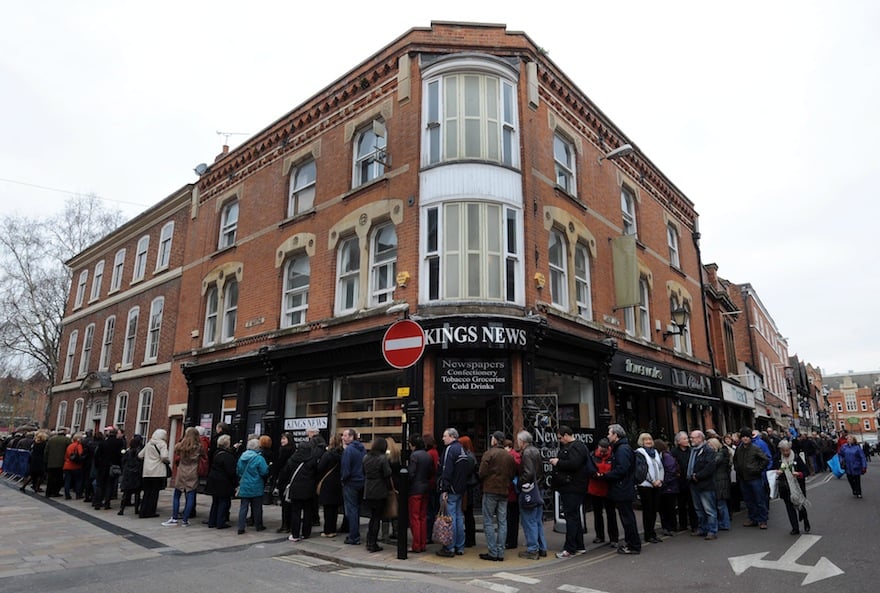 Members of the public queue outside Leicester Cathedral, to view the coffin of Richard III in Leicester, England, Monday, March 23, 2015. (AP Photo/Rui Vieira)

Everyone in Leicester knows exactly when their city changed forever. It was Aug. 25, 2012. That was the day archaeologists found the bones of King Richard III buried under a parking lot. Since then, the English city has been in a mad scramble to transform itself into a fixture on the lucrative tourist trail.

Its big unveiling occurred in late March, when tens of thousands of visitors poured into the city for a week of events and services to honour the last English king slain in battle. They stood six deep to see Richard III’s coffin taken to the cathedral, where, during the next three days, some 20,000 queued to walk past the king’s remains. One man flew from Moscow, just to place a white rose by the coffin, before flying home the same day.

Related: The inside story of Canada’s connection to Richard III

Located an hour north of London on a busy railway route, the city of 330,000 has a reputation as a grim, deprived city struggling to attract business. Once the second-richest city in Europe, thanks to a booming textile and manufacturing industry, it is now trying to rebrand itself in the post-industrial era. Health care is now the top sector, while unemployment is five percentage points above the country’s 5.7 per cent.

Leicester had cleaned up its compact downtown core, much of which is pedestrianized. Its streets are lined with medieval, Georgian and Victorian buildings, as well as all the big retail stores. And it has aggressively sought funding to better show off its 2,000-year history. The remains of a Roman public bath, complete with an eight-metre-high wall, is a 10-minute walk from the railway station. Next door is a Saxon church.

Yet, in a nation stuffed with historic cities, it couldn’t get noticed. Tourism accounts for just one-tenth of the overall county economy. Leicester needed a hook to bring in school groups and bus tours. It got a historical rock star. Richard III comes with mystery (his body was lost for nearly 530 years), controversy (he may have usurped the throne and killed his nephews) and a devoted worldwide following.

“Whatever you think of Richard III, this is going to bring them in,” says Phil Stone, head of the Richard III Society. And came they did, leaving behind cash and compliments. “You can almost measure the rise in the thermometer of civic pride taking place in front of your eyes,” says Tim Stevens, the Anglican bishop.

The biggest impact can already be seen in and around the cathedral. The area in front of the 900-year-old building is the heart of the new-look city. A $5-million government facelift created a garden filled with statues and greenery, while the Anglican diocese spent another $5 million inside, building a tomb for Richard III’s remains, and reordering the small building to better cope with its new demands. While around 30,000 visited in 2012, more than 160,000 came the next year.

Related: Thousands line up to see the parking lot king

Across the street, the empty school beside that famous parking lot has been turned into a Richard III exhibition centre. Nearby Bosworth, where the king was slain by the forces of the future Henry VII, has seen its tourist numbers increase by 40 per cent since 2012.

Sir Peter Soulsby is the city’s mayor and chief cheerleader, one with a detailed five-year action plan to expand tourism beyond the king. “We need to rediscover our history,” he says. He wants museums overhauled, and new venues focusing on the area’s industrial past. In addition, he believes Leicester needs to promote its more modern life. It’s the most multicultural city in Britain—the Golden Mile is famous for its Indian restaurants and gold and sari shops—and one that has escaped the ethnic divisions that have plagued other British cities.

During that Richard week, 20 per cent more customers ate at Chutney Ivy, a sleek, open-kitchen Indian restaurant owned by Shaf Islam. Three years ago, when he first heard about the parking-lot king, Islam hoped, “This could be our Robin Hood.” Nearby Nottingham has created a very profitable trade out of the hero of folklore and film. Now, Leicesterians hope that fact will top fiction. “A neighbouring city has a mythical outlaw,” says Soulsby, with a laugh. “We have a dead king.”