Can a group of Newfoundlanders bring Elon Musk's hyperloop vision to life?

A Q&A with Adam Keating, co-lead of a startup leading the way in the conceptual high-speed transit. His group came second at a competition sponsored by Musk. 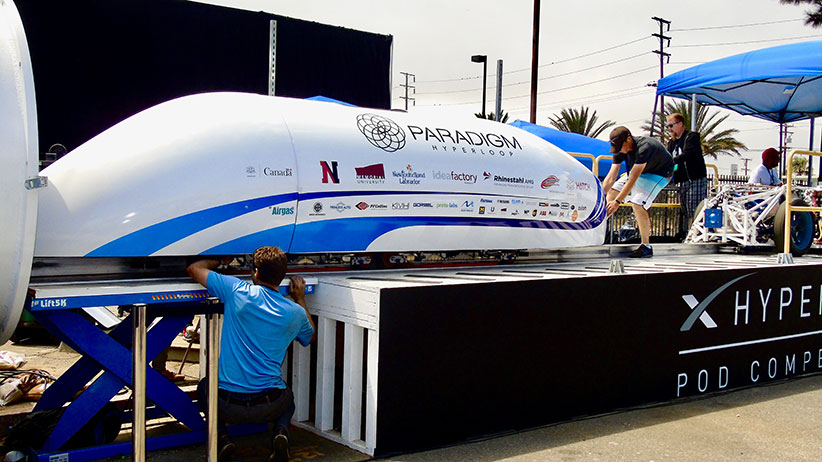 Adam Keating never expected to be gleaning wisdom from Elon Musk. At least, not before the recent mechanical engineering grad from Newfoundland was thrown off his career path leading to a comfortable job in the oil-and-gas sector and onto a new, high-speed track headed in an altogether different direction. On a whim two years ago, Keating joined a pan-university club striving to build a hyperloop pod—a conceptual high-speed vehicle that travels through a low-pressure tube at speeds of up to 980 km-h. The club started as a hobby for Keating, but a year later, he was devoting all his spare time to a new company called Paradigm Hyperloop, made up of equal parts Memorial University students in Newfoundland and their Northeastern University colleagues in Boston.

“It’s been a full 360 since I joined this team,” says Keating, still on a high from Sunday’s hyperloop pod competition hosted by Musk’s SpaceX company near Hawthorne, Calif. Paradigm placed second in the prestigious event, reaching 101 km-h at top speed over a half-kilometre distance. The winning team’s pod, WARR Hyperloop from the Technical University of Munich, reached a mind-boggling 324 km over the same distance.

Musk himself wrote the white paper on hyperloop in 2013, describing a technology that could bring passengers from San Francisco to L.A. in less than 30 minutes. Since then, the pace of innovation in the space has reached a dizzying clip, with engineers young and old vying for a piece of nascent industry. We spoke with Keating following Paradigm’s recent achievement to talk about the future of hyperloop, switching gears and Newfoundland’s budding startup culture.

First, what is hyperloop and how does it work?
Hyperloop is a mode of transportation. In its simplest form, you have a low-pressure vacuum tube that stretches from one connection to the next. Because all the air is removed from the tube, there’s no drag on the vehicle inside it can travel at high speeds. The actual thing that passengers or cargo would be placed in is called a pod. With most of the designs, the pods float in either air or using magnets. The vehicle we built and ran in the competition is 18 feet long, 18 hundred pounds and floats on an air cushion. It reached speeds of 60 miles an hour on Sunday and we’re hoping to push it even higher, to 200 miles an hour in future tests.

How did this group of students from Newfoundland and Boston team up to start Paradigm Hyperloop?
It started about two years ago with students from six different universities, mostly in the United States. We were called Open Loop back then, and basically we met on social media, through our networking channels, and started getting together to talk about this technology. At that point I didn’t know if it was a possible thing because it was super, super early and no one had done any real work on it. I went to the first meeting to see what it was all about, and from there, it just started picking up speed. We started building and testing and the whole journey really took off. Towards the end of 2016, MUN and Northeastern were doing a large portion of the work and working really closely on the final testing. That’s when we formed Paradigm Hyperloop.

What is Paradigm ultimately working towards?
We have a couple of options. There’s going to be another SpaceX competition next year, so there’s opportunity there to explore things we want to do technically and test for another pod to enter into that event. There’s also commercial opportunities for the technologies we’re developing. We could take a piece of our technology, refine it and sell it to companies looking to build hyperloop pods or networks.

Had you been involved in robotics or any kind of high-tech research or development at that point?
Nothing like this. It totally changed my life and career path. I was planning to work in oil and gas. Up until then I’d had really good work terms in the industry. But then when I started doing this and realized I was way more passionate about it: pushing technology and doing mechanical engineering at work. I’ve started two companies now. One’s called CoLab software, where, in the same way Google Docs lets multiple people work and edit something at the same time, we’re building that for CAD (computer-aided design). The second startup is DuXion Motors and we’re building election propulsion systems for electric aircrafts. I live in the startup world now.

I saw that your pod uses air-based versus the more common magnetic levitation technology. Why did you chose to go this unconventional route?
The air-based levitation was the original design proposed by Elon Musk. But there are other reasons we went with it. First, it’s super efficient. In terms of actually floating on it, it gives you a frictionless layer, and it also works well at low speeds. Some of the teams that had magnetic levitation, at lower speeds it actually didn’t move because of the drag of the magnets. We also really wanted to prove that this technology is possible. Yesterday was the first time an air-based hyperloop pod ever did a run in a vacuum hyperloop tube—the first time in the world. So that was an incredible feeling for us.

Did you get a chance to pick Elon Musk’s brain at Sunday’s competition?
Not this time. We met him in January at another competition and that was really cool. He was walking down the road with his security team and the whole road just cleared out and he stopped right in front of our pod and no one really knew what to say. We were all shocked that he was there. He was incredibly supportive of what we were doing. The first thing he did was ask how he can help us. The big thing we told him was that we went with the original design that he had proposed, the air-based levitation, and he thought that was really cool. We did all right in that competition, but didn’t qualify to participate in the full-scale run, so he was trying to pull some strings for us to get us into the tube the next day to try it out. It fell through though because there was a section of the track that crosses over a train track and there was a train scheduled to come through that morning.

Newfoundland and Labrador isn’t the first place people think of as a hub for high-tech startups. Is that changing?
That culture is really growing in the province, and projects like Paradigm are making this happen. People on our team are transitioning away from oil and gas and traditional jobs you would get in Newfoundland. There are five startups in Newfoundland that came from this hyperloop team. Some students on our team also work at Apple, SpaceX, Google. And just last weekend, SpaceX, Tesla, and Boeing tried to recruit everyone on our team. Memorial University recently opened their Centre for Entrepreneurship, and we’re seeing more and more incubators and coworking spaces like that in Newfoundland. It’s really been a game-changer. The startup community is certainly smaller than what you would see in Waterloo or even Halifax, but it’s definitely standing.

Where do you see hyperloop technology going in the near or medium term?
This competition has really pushed the timeline on hyperloop development. The team who won last year, they started their own company. There are three or four other teams that are building now. I think in the next five years, you’ll start to see hyperloop being a real thing. It’ll probably be cargo first, and shortly after it’ll be passengers as well. It’s gonna be incredibly exciting to see something that can connect San Francisco to L.A.—or St. John’s to Corner Brook—in 30 minutes instead of your standard seven-hour drive.