Canadian kids who risked their own lives to save others 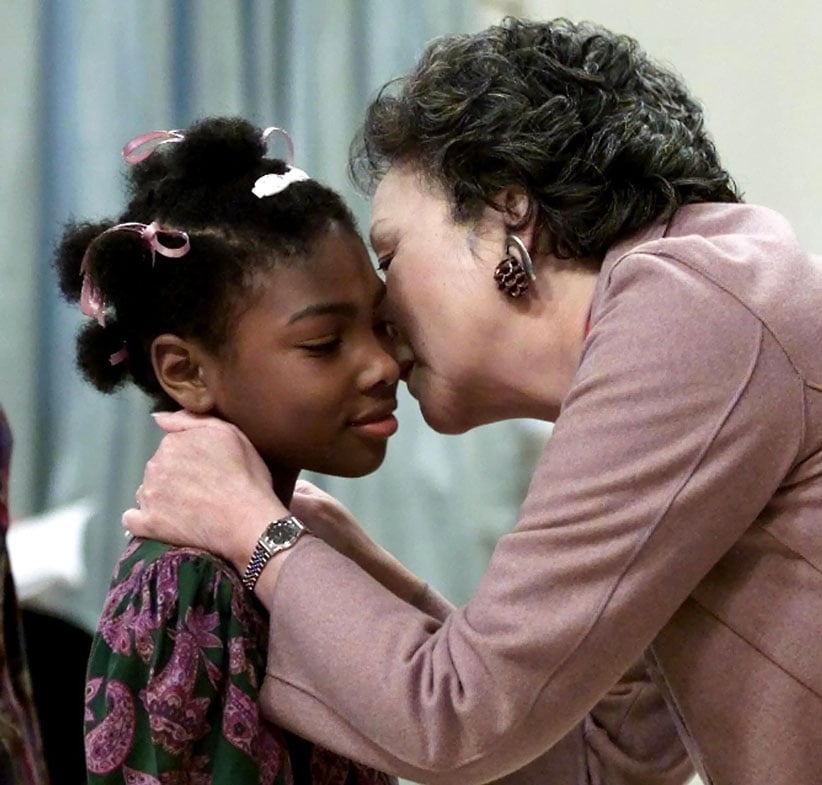 Marie-Helene Etienne-Rousseau, of Sainte-Jeanne-D’Arc-de-Lefebvre, Que, is kissed by Governor General Adrienne Clarkson after Etienne-Rousseau was decorated with Medal of Bravery at Rideau Hall in Ottawa on December 8, 2000. (Fred Chartrand/CP)

Created in 1972, decorations for bravery (Cross of Valour, Star of Courage and Medal of Bravery) recognize people who risked their lives to try to save or protect a loved one or a perfect stranger whose life was in immediate danger. Below are 10 of the youngest recipients of this national honour.

1. Julius Richard Rosenberg, 5, Medal of Bravery: On Sept. 20, 1992, at West Hawk Lake, Man., Julius rescued his younger sister from a black bear that had followed them into the water. When the bear bit into the little girl’s lifejacket, Julius was able to free her. Back on land, Julius confronted the bear with angry noises, causing it to back off.

2. Jennifer Kateryna Koval’s’kyj, 6, Star of Courage (posthumous): On April 2, 1996, Jennifer died trying to stop her mentally unstable father from attacking and eventually fatally wounding her grandmother in Bowmanville, Ont. She stepped between her father and grandmother and pleaded with him to stop his assault, but was herself killed.

3. Jean-Paul Theroux, 6, Medal of Bravery: When his father was severely injured in a snowmobiling accident on a mountain near Sparwood, Alta., on April 11, 1997, Jean-Paul set off for help, retracing their snowmobile tracks. After getting lost, he continued to trek through deep snow until he reached a highway and flagged down a passing motorist.

4. Nick Vézina, 6, Medal of Bravery: On Dec. 31, 1998, Nick and his 20-month-old brother were playing in their farmhouse in St-Félicien, Que., while their parents milked the cows. When he smelled smoke, Nick brought his brother upstairs and called 911, then crawled 30 m to safety through thick smoke, carrying his brother on his back.

5. Rachel Rioux, 6, Medal of Bravery: On July 25, 1992, Rachel and her five-year-old brother were on a tractor with their father in Cacouna, Que., when he stepped down to attach chains to some logs. The boy activated gears at the back of the tractor, which caught his sweater and began to choke him. Rachel freed him, but her left hand was mangled in the process and required 22 hours of reconstructive surgery.

6. Jocelyn Mcdonald, 7, star of courage: On April 25, 1992, in Minaki, Ont., a man approached Jocelyn and her five-year-old friend and told them to remove their clothing. The man then grabbed her friend. Jocelyn hit him with a rock, and although he temporarily lost his grip, he managed to take the girl into his house. Jocelyn snuck in, found her friend and they escaped. (Jocelyn was murdered eight years later.)

7. Marie-Hélène Étienne-Rousseau, 7, Medal of Bravery: On April 5, 1999, Marie-Hélène heard her younger brother cry after he’d fallen into the St-Germain River near their home in Ste-Jeanne- D’Arc de Lefebvre, Que. She descended the steep slope and took his hand, but fell in herself. Supporting her brother with one hand, she clutched the shore until her mother heard their screams and pulled them out.

8. Kerrick Flatt, 7, Medal of Bravery: On March 23, 1996, the all-terrain vehicle and toboggan Kerrick and his father were on crashed through the ice on Manitouwabing Lake near Parry Sound, Ont. Kerrick pulled himself out and made several attempts to use a stick to pull his father out. When his father managed to pull himself onto the dangerously thin ice, Kerrick used a stick to pull him to safety.

9. Justin Blacklock, 8, Medal of Bravery (posthumous): On Nov. 27, 1997, after a severe snowstorm knocked out electricity at his home in Port Elgin, N.B., Justin and his six-year-old sister entered a barn to see the generator powering the farm. His sister’s bootlace got caught in the spinning shaft, and when Justin rushed to her rescue, his jacket became entangled and he was fatally wounded.

10. Caroline Deschênes, 8, Medal of Bravery: On Nov. 12, 1993, while playing with her eight-year-old handicapped brother outside their home in Baie-Comeau, Que., Caroline saw an out-of-control front-end loader heading for them. She grabbed her brother’s hand and pulled him to safety.

Source: Chancellery of honours, office of the secretary to the Governor General

FILED UNDER: blog of lists Medal of Bravery