Canada's Food Guide: Ignoring it? Now's the time to follow the rules.

Opinion: The latest guidelines are good for the environment, animal welfare and public health. 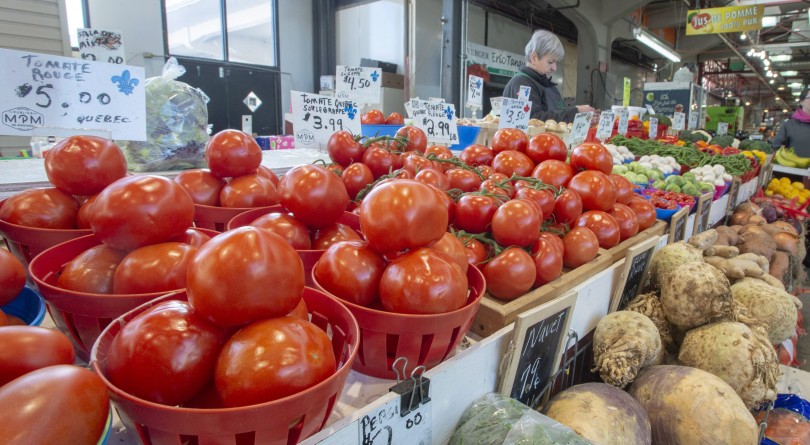 A vegetable stand at the Jean Talon Market in Montreal, where Canada's new Food Guide was unveiled (THE CANADIAN PRESS/Ryan Remiorz)

Since its inception in 1942, there has perhaps not been an edition of the Canadian government food guide as highly anticipated as the one published on Jan. 22. Drastic changes were made both in the process to create it, and the guidelines themselves. With obesity, heart disease, type-2 diabetes and other diet-related illnesses on rise across the country, Health Canada was forced to take a hard look at what they were telling Canadians to eat. Concerns about the influence of the food industry plagued past guides, leading Health Canada to publicly assure Canadians that they were doing things differently this time. And that they did. With a new focus on plant-based foods, the latest version of Canada’s Food Guide is a win, and not only for public health, but for ethics and the environment, too.

One of the greatest changes to the new guide is the elimination of dairy as an exclusive food group. It can now be found as one (small) option within the broader protein group. Dr. Pamela Fergusson, a registered dietician in B.C. calls the change positive. “In the past, dairy was seen as being essential, as important for building strong bones and healthy teeth, because of the combination of protein, calcium and vitamin D.” However, she says, “the reality is protein and calcium are abundant in many foods and don’t need to be found exclusively in dairy.” She notes that vitamin D is not naturally occurring in dairy, but is added, just as it is in many fortified plant-based milks. “There is nothing nutritionally unique about dairy milk.”

Another big change to the guide is a new suggestion that Canadians consume plant-based sources of protein more often than animal sources. Dr. Fergusson says seeking protein from plants, such as beans, lentils and nuts, rather than animal sources is a recipe for great health. That’s thanks to the abundance of other nutrients, particularly fibre, that will be consumed, along with a lack of saturated animal fats. “We see that when you consume a diet rich in plant-based proteins, rich in fibre, rich in fruits and vegetables, we see a lower risk of all of the most common killers of Canadians, like heart disease, diabetes, and certain cancers.”

But while the main purpose of the Canada Food Guide is to inform Canadians on healthy eating, the new edition can also benefit the planet. During the consultation period for the new edition, Health Canada heard and recognized the environmental benefits of a diet based mainly on plants. Indeed, as study after study assert, animal agriculture is one of the leading global drivers of greenhouse gas emissions, deforestation, ocean degradation, fresh water pollution and loss of wildlife and biodiversity. And Canada certainly plays a big part in that.

A 2018 study published in the journal Nature, made headlines worldwide with its suggestion that western countries reduce beef and pork consumption by 90 per cent, chicken and dairy by 60 per cent, replaced with four to six times more legumes, to help avoid potential climate breakdown by 2030. A more recent study published this month in British medical journal The Lancet, echoed much the same. Compiled by 30 scientists over three years, the report suggests that North Americans reduce red meat consumption by 84 per cent in order to help feed our booming population, and save ourselves from the perils of climate change by 2050. (An 80-90 per cent reduction in beef consumption, by the way, equals out to about a single small serving of beef per week.)

Thankfully, for much of Canada, the availability of plant-based foods is now widespread and growing. We are a world leading producer of pulses, and specialty vegan products, stores and restaurants are booming coast to coast. Thus, questions about the ethics of consuming animals, particularly when alternatives are not only available but recommended, have come up for debate. In an age of available alternatives, does a once necessary evil just become evil?

In Canada, farmed animals are bred, exploited and killed by the hundreds of millions each year, typically far away from public viewing. Thanks in great part to social media and smartphones however, the long hidden truths of animal farming are now making it out into public spaces. Undercover videos from Canadian farms, transport trucks and slaughterhouses, and testimony from former employees, show the inherent—and often legal and standard—cruelty that animals face within our industrialized food system. And all for a food source that even our government now recognizes as problematic.

As the slow-moving guide acknowledges this shift to plant-based eating, it is obvious that a much larger cultural shift is already underway, in Canada and beyond. And in order to help bolster this much needed Western evolution—and aid the greater good—Canadians will need to actually follow the guide recommendations. Although Canada’s Food Guide is touted as the second most downloaded government document after tax forms, it is unclear how many everyday Canadians actually use it.

If you are one who has ignored the recommendations in the past, consider giving this guide a go, for the wellbeing of not only Canadians, but for the planet and the animals, too. The government got it right this time.